Which countries are best at educating for business?

The quality of higher education and training is a crucial determinant of a country’s competitiveness and its capacity for economic growth.

The World Economic Forum’s Global Competitiveness Report 2015-16 assesses 140 of the world’s economies on the quality of their education systems (as evaluated by business leaders), plus secondary and tertiary enrollment rates and the extent of staff training. 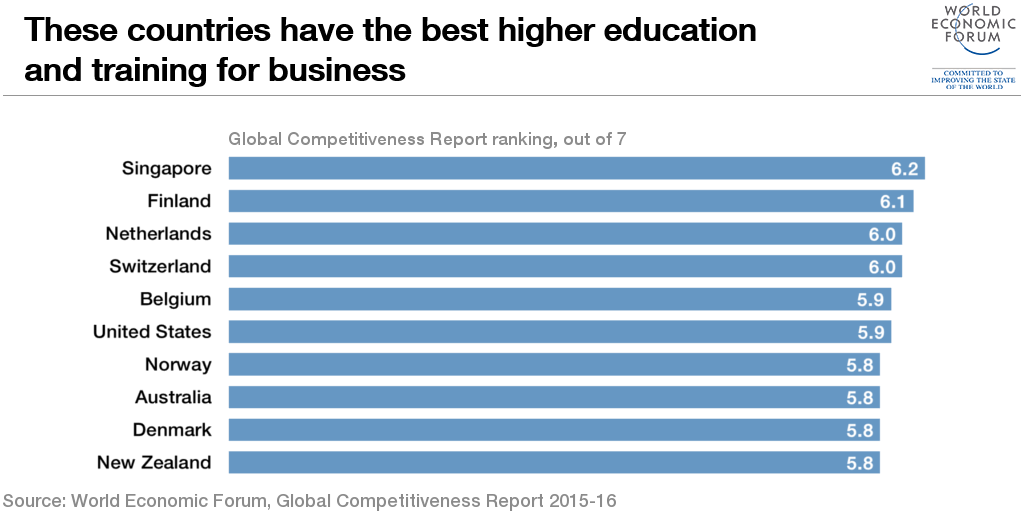 Singapore overtakes Finland to win top spot in this year’s ranking, with a score of 6.2. However, Finland’s higher education and training system remains strong. The Netherlands retains its place in the top three, level with Switzerland. Both return the same score as last year.

European nations feature strongly across the top 10, including Belgium in fifth, Norway in seventh and Denmark in ninth. Australia, New Zealand and the United States complete the top 10.

The data for this ranking is taken from a number of sources including the UNESCO Institute for Statistics, UNICEF, Sistema de Información de Tendencias Educativas de América Latina (SITEAL), as well as national sources and the Forum’s Executive Opinion Survey.

Have you read?
Find out which countries topped last year’s ranking
Which countries come top for all skills and education?
3 ways to close the universal skills gap