Why we must count the human cost of war

‘Act fast and do whatever it takes’ to fight the COVID-19 crisis, say leading economists

Is Italy turning the tide on coronavirus?

The economist Paul Collier famously argued that wars are development in reverse. The human costs are certainly devastating, resulting in the killing and maiming of hundreds of thousands. Around 180,000 people were slaughtered in 42 armed conflicts last year. Several times more likely died as a result of war-related malnutrition, disease and preventable illness. These are conservative estimates – the numbers are likely much higher. The reality is that we don´t really know the real toll.

Peace is an essential precondition of sustainable development. But it is hard to know if the world is becoming more or less peaceful without a basic measure of the frequency and intensity of war. The fundamental unit of warfare is the number of deaths it generates. And while it is technically possible to track violent deaths and excess mortality resulting from armed conflict – it is the subject of Better Angles of Our Nature – this is demanding and resource-intensive work. 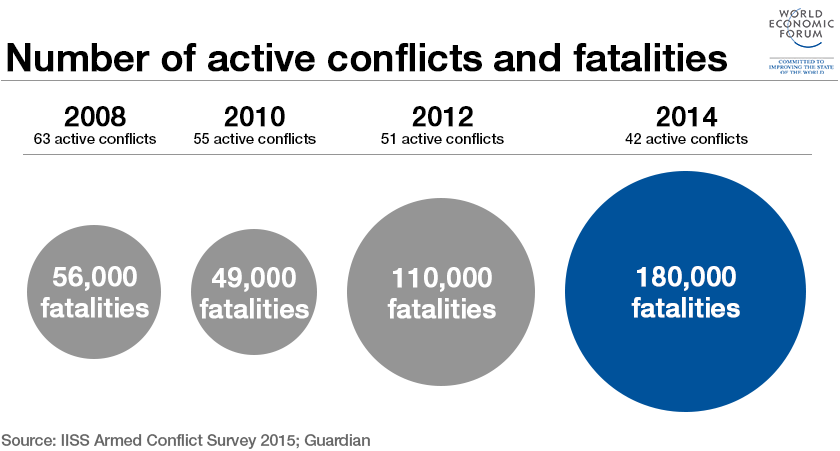 The United Nation´s newly minted Sustainable Development Goals (SDGs) requires all governments to, among many other things, “significantly reduce all forms of violence and related death rates everywhere”. This on its own represents an extraordinarily progressive and revolutionary agenda. What it means is that national authorities are responsible for monitoring changes in homicide and conflict-related deaths. Unsurprisingly, not everyone is equally enthusiastic.

While most countries support the idea of tracking conflict-related mortality, a smaller number are adamantly opposed to any global system that monitors trends. Some of them argue that counting bodies is too complex and amenable to outside meddling and manipulation. Others complain that there is no transparent methodology to generate credible data. These are familiar concerns. They are also out of date.

It is true that counting conflict deaths is political. Governments and rebel factions regularly obscure death tolls for legal and tactical reasons. Controversies over death counts occurred in Iraq, Syria, Libya, Ukraine, the Democratic Republic of the Congo (DRC), Darfur, Vietnam, and virtually every armed conflict over the last two centuries. Yet it is also worth noting that counting poverty rates, or food prices, or the prevalence of disease is political. This is hardly an excuse for inaction.

More importantly, counting conflict deaths is a moral, legal and humanitarian imperative. Body counts treat every life as equally precious. Verifiable and reliable assessments can ensure the human costs are properly accounted for and can help justice be served. Generating solid numbers is an ethical imperative. While precision is important, counts and estimates don’t necessarily have to be exact to be useful.

What is more, global capacities to count conflict deaths have expanded considerably over the past decade. While there is no official UN or governmental entity responsible, several research institutes are devoted to counting the dead. Some of them, including the Uppsala Conflict Data Program, track “direct” deaths occurring during battles or in the wake of mass atrocities, war crimes and genocide. Others like the Center for Research on the Epidemiology of Disasters use statistical measures to predict “indirect” deaths, crude mortality due to malnutrition and disease caused by war.

The good news is that the quantity and quality of reporting on conflict deaths is improving dramatically. There are literally thousands of citizen groups monitoring lethal violence, many of them enabled by new technologies like the crowd-source platform, Ushahidi. And while there are naturally some disagreements between researchers over the merits of counting versus estimating death tolls, global awareness of the issue is rapidly expanding.

Fortunately, a United Nations Inter-Agency and Experts Group will propose a final set of indicators for the SDGs. Their next meeting is in Bangkok from 26-28 October, and they have until early 2016 to complete their mandate and offer recommendations. Given the centrality of peace to the SDG agenda, they must adopt an indicator on conflict-related deaths. Omitting this metric would dilute the bold agenda signed-on to by every country in the world.

In the end, any effort to track peace and development should be approached with caution. Global and national monitoring mechanisms must adopt a careful and conservative approach. This is equally true of many SDG indicators, and not just those related to conflict-related deaths. As is the case with Millennium Development Goal indicators established 15 years ago, the next 15 years offer an opportunity to improve how the world measures and responds to the defining challenges of our era.

Author: Robert Muggah is the Research Director of the Igarapé Institute, Director of Research and Policy for the SecDev Foundation and a member of the World Economic Forum’s Global Agenda Council on Fragility, Conflict and Violence.

Image: A man checks an apartment on a damaged building at the site of a blast in the town of Reyhanli in Hatay province, near the Turkish-Syrian border, May 13, 2013. REUTERS/Umit Bektas

After a year of devastating floods across Asia, this is how some of the world's biggest countries are staying afloat

4 charts that track the rise in global arms sales

Encryption is under threat - this is how it affects you