The lack of diversity in the venture capital and technology industries has become a topic of national conversation. Large tech companies from Intel to Facebook are setting public goals to aggressively increase the diversity of their employee base, in part to get their share of the best employees, but also because it better reflects their customer base. But you can only solve a problem if you acknowledge you have one. The good news is that over the past couple of years, the technology and venture communities have been publically introspective about the composition of their workforce.

The statistics for tech companies are startlingly poor, particularly in the all-important engineering and leadership positions. A 2014 study from the Diana Project found that only 2.7% of venture capital-backed companies have a woman CEO. As Evan Sharp, co-founder of Pinterest said: “The bar is so low, it’s insane.” 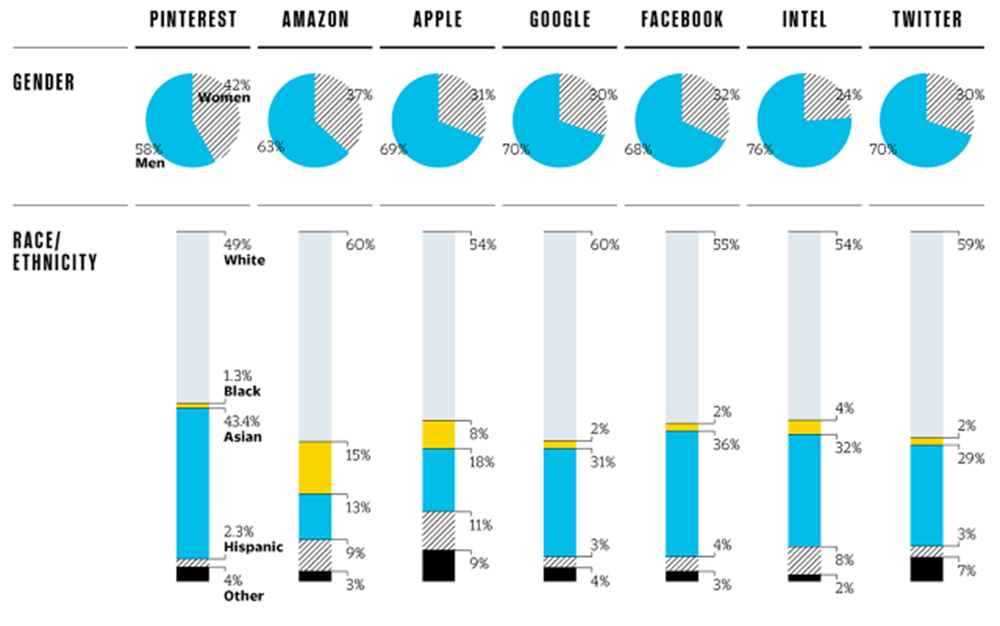 The venture community has also started asking itself about its own make-up and impact on the start-up ecosystem. Not surprising to anyone close to the industry, venture capital is even less diverse than that of its start-up progeny. In 2014, Dan Primack did his own survey of 92 venture firms which showed that 4.2% of investing partners are women. A 2015 Page Mill Publishing study of more than 800 venture capital firms found that less than one-third have even one woman on their investment team. In terms of ethnic diversity, a recent study of 200 venture capital firms by Venrock partner, Richard Kerby found that fewer than 2% of senior investing professionals are black.

Diversity is core to the goals of venture firms since it is not only good for the venture industry, it is also the smartest approach to investing. Studies have shown that having a diverse team encourages different perspectives, creates better decision-making, and is correlated with better performance. A recent Scientific American article noted that “in the presence of diversity, [people] were more diligent and open-minded”.

This holds true in the arenas of investing and technology. Having a broader circle from which to draw ideas and experience makes us more effective as investors. Meredith Jones did a masterful job describing why it makes as much sense to diversify the people who invest portfolios as it does to diversify the portfolios themselves. First Round Capital, a venture capital firm, found that start-ups with women founders perform 63% better than all-male teams.

Venture capital firms employ a fraction of the people the technology industry does. So why focus on diversity in venture capital? Because venture capital firms provide seed capital to start-ups determining which small companies have access to capital. Venture capitalists become board members and guide the company’s priorities as they grow. If we aren’t diverse, the likelihood that our portfolio companies will be is low. Not because we don’t want them to be, but because we are subject to the same unconscious bias that every human is. We invest in people within our network and they, in turn, hire people who they are most comfortable with. The 2014 Diana Project report effectively confirmed this point, showing that venture capital firms with women partners are twice as likely to invest in companies with a woman on the management team.

Intellectually, most of us believe that diversity is the smart thing to do, but it isn’t easy to change, as early trends at Facebook and Google show. But it only means we have to try harder. Good intentions won’t be enough. We need to attract, select, develop and retain a more diverse workforce. I am optimistic that our industry can lick this, but how?

Early lessons from the NVCA Diversity Task Force, which I co-chair alongside Ashton Newhall, the managing director of Greenspring Associates, suggest that this is not a short-term exercise but a shift in the way we do business. For those of us who are serious about making that commitment, here are the first three things to pay attention to:

1. Semantics matter…it is all about inclusion

To harness the benefits of diversity, we need to embrace a culture of inclusion. Diversity is a numeric goal, which is necessary but not sufficient if we want long-term improvement in our ethnic and gender make-up. We need to attract more skills, ideas and talent to succeed but we also need to let them in on the conversation once on the team. Everyone will perform better in a meritocracy that actively includes more points of view.

2. The tone at the top matters

Intel sets an amazing example with their CEO Brian Krzanich driving their diversity effort. At the press conference for the launch of its Diversity Equity Fund, he insisted on introducing the initiative himself. He needed no notes and was on a first-name basis with many of us who work on behalf of diverse communities in Silicon Valley. He was taking an offensive, not defensive, posture on making change happen. And his team is incredibly proud of Intel’s leadership.

As venture capitalists, we can bring that same emphasis to the boardroom of start-ups, which all want to be the next Intel, Apple and Google, and which are in a talent war for the best people. They have an imperative to widen their networks.

3. Employ the ‘lean start-up’ model and iterate our way to success

One of the leaders in the conversation on diversity in the start-up community has been Pinterest. An engineer there, Tracy Chou, started releasing the data on diversity in tech companies through a GitHub query she launched in 2013 asking where are the numbers? Evan Sharp, a Pinterest co-founder, has been vocal about their intent to change; even more impressively, he announced the launch of the Pinterest “Inclusion Labs. Helped by an innovative diversity expert, Joelle Emerson of Paradigm, they are going to publically share their goals, successes and failures so we all can benefit from what they’ve learned.

We need to join them in doing the same. In the same approach we take to building technology, let’s iterate our way to success.

Taking a cue from role models like Intel and Pinterest, leaders in the venture community have committed to knocking down the obstacles in the way of diverse, talented individuals. At a Demo Day recently sponsored by the White House, 45 venture firms from across the country with over $112 billion in assets under management publically pledged to adopt concrete initiatives and to share the results. We will have successes and likely some failures on our journey. But we will never improve if we don’t start. And we will all win by increasing connections among minority and majority communities, because those connections are so critical to our shared success.

Image: Employees gather in their work environment for a discussion at the new headquarters of Facebook in Menlo Park, California January 11, 2012. REUTERS/Robert Galbraith