Are you working for free because you’re a woman?

It happened again. A former client has asked me whether I could go to a meeting as a goodwill gesture. It would give me an opportunity to talk about our previous project to a wider audience, they promised me. Of course opportunity is simply code for “you will not be paid for your time”. I said no, but it wasn’t an easy decision.

Turning down any opportunity always makes me hesitate. I feel uneasy about saying no to these requests even though it’s my time that I will be giving away and I’d tell anyone else they should be paid for their time. Yet still a little voice in my head wonders, “is it unseemly for a business woman’s first question to be whether she is going to be paid for her time, especially one who runs a consultancy committed to making business more empathic?”.

Perhaps I was at fault for not being more forthright and getting the fundamental question of budget answered at the outset? Both these worries seem wrong. A professional should not have to state the obvious – that she would expect to be paid for her time.

Did this have anything to do with being a woman?

It was once this was clear in my head that I moved on to the next, more uncomfortable question. Did this have anything to do with being a woman? I started asking whether men in similar positions to mine – CEOs of their own companies – would be asked to do things just in the hope of opening up potential opportunities? Would they be asked to give up their time to make speeches, attend meetings and hand out hard-earned advice for free, albeit coded in the name of opportunity and goodwill? Maybe, but I’m sure he wouldn’t be doing it without a clear understanding of what he would be getting in return.

I also asked myself whether the people prevailing upon my team and me to work for free would be willing to put in the long hours they do if they weren’t receiving a sizeable paycheque at the end of each month. The answer was an emphatic “no”.

I asked my Twitter followers whether they had experienced similar things and I was overwhelmed by how many women replied. All had similar stories. Many said that women were more likely to be asked for advice for free and were less direct than men about asking to be paid for their time.

From pocket money to pay negotiations

Yet the causes lie not only with institutions and culture. Women must do more to demand equal treatment too. From a young age, women are discouraged from thinking or talking about money. As a child, I was trained to be a “nice girl”, praised when I went to visit my grandmother, but upbraided if I asked her for more pocket money. I was applauded when I got good grades at school, but attracted frowns when I showed my pleasure at getting more tips than any of the other waiting staff at the local restaurant. I was given more treats when I was kind to my sister, but scolded when I deployed a cunning strategy to beat her at Monopoly. 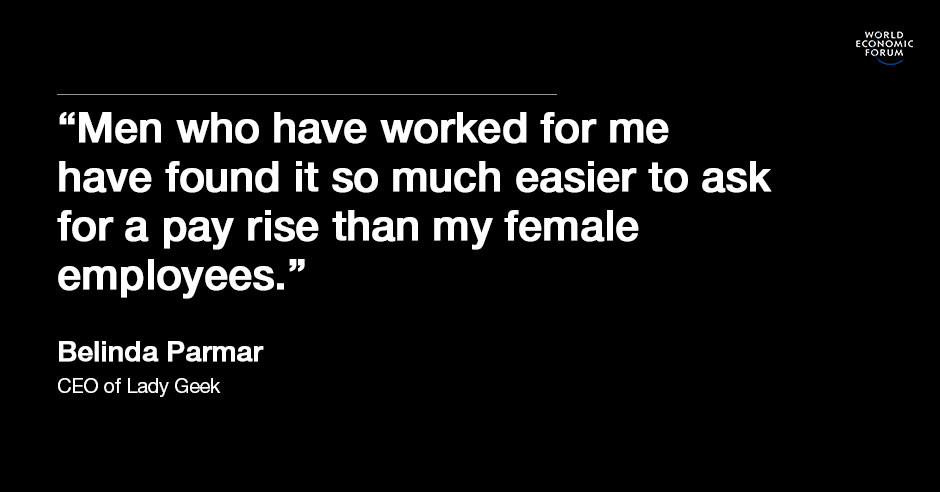 As an employer, I find the same in my staff. Men who have worked for me have found it so much easier to ask me for a pay rise –sometimes mentioning ludicrously overblown figures – than my female employees. It seems that men often overvalue their impact and contribution to the business while women routinely undervalue theirs.

So to all the women working in business, I say this: there is no need to feel hesitant about asking for money. Our contribution is every bit as a valuable as the men we work with. Women-led SMEs already add approximately £70 billion to the economy. So let us mark today, November 9th, as the day that we cease to undervalue our time and effort. Let us make today the day that we start to demand the same pay as male entrepreneurs. Let’s value our contribution. So the next time, when someone asks you to do something, look them straight in the eyes and ask, “what’s your budget?” before you give an answer. After all, nice girls don’t make history.

This article first appeared in The Guardian

Author: Belinda Parmar is the CEO of at Lady Geek and the author of The Empathy Era and Little Miss Geek. Follow her on Twitter @belindaparmar

Image: A woman walks through Brookfield Place off Bay Street, on the day of their annual general meeting for shareholders in Toronto, May 7, 2014. REUTERS/Mark Blinch

8 female CEOs on bridging the gender gap in tech

World leaders must put women at centre of COVID-19 recovery

As G7 leaders meet this week, they must address efforts to increase gender equality to boost global economic growth to help the world recover from COVID-19.

LGBTIQ people have been hit hard by COVID-19. Here’s how we can all help

Gender equality, sustainability and social justice: A roadmap for recovery