Does the world need an International Court Against Terrorism?

The terrorist attacks across Paris on the night of November 13, which left at least 120 dead, are a tragic reminder of the ubiquity of modern terrorism. This year alone, violent extremists have murdered innocent people in the name of religion or politics in France, Tunisia, Kenya, Israel, Nigeria, and, of course, in Syria and Iraq – just to name a few countries. Like the black plague in medieval Europe, terrorism is stalking the modern world, and eradicating it has become a global imperative.

The international community has long been concerned about the threat posed by terrorism. Countries have enacted security legislation and created special intelligence and police units to stop perpetrators and discourage or prevent attacks, and have complemented these efforts by entering into international and regional treaties and bilateral agreements.

And yet, despite numerous attempts to create one, there is no global legal body leading the fight against terrorism. It is time for that to change. 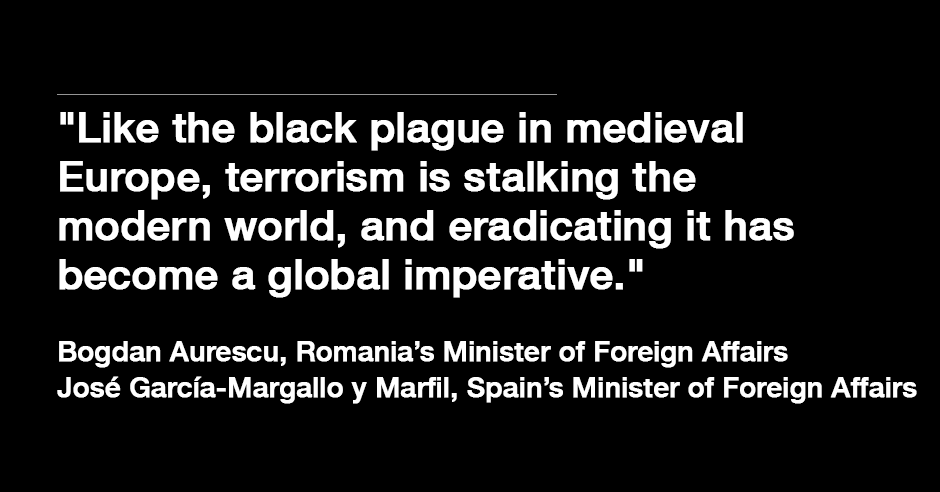 The effort to combat terrorism at the international level goes back nearly 90 years. In 1926, Romania – the first country to introduce the crime of terrorism into its criminal code – asked the League of Nations to “consider drafting a convention to render terrorism universally punishable.”

But it was not until 1934 that the assassination of King Alexander I of Yugoslavia and French Foreign Minister Louis Barthou prompted the League of Nations to make the first attempt to create international judicial mechanisms to confront terrorism. A group of experts drafted the Convention on the Prevention and Punishment of Terrorism and the Convention for the Creation of an International Criminal Court. Both conventions were signed by 24 governments and ratified by one, but the outbreak of World War II ensured that neither ever entered into force.

To date, 19 “sectorial” conventions on terrorism have been signed, covering terrorist bombings, nuclear terrorism, the financing of terrorism, acts against air and maritime security, and acts against internationally protected persons. But a global legal mechanism to combat terrorism in all its forms has remained out of reach.

Every attempt to create one has foundered on important disagreements among countries, most notably about how to define terrorism and whether it includes acts committed by armed forces and freedom fighters. Most recently, an effort to place terrorism under the jurisdiction of the International Criminal Court (ICC) was dropped due to the lack of a universally accepted definition and the additional workload that such cases would mean.

As terrorist attacks become increasingly common, an international body to counter them has never been more important. In February, Romania proposed the establishment of an International Court Against Terrorism (ICT) and, together with Spain, has launched a joint consultation process that we hope will lead to its eventual creation. Such a court would be empowered to prosecute any act of terrorism perpetrated after its creation, offering desperately needed assistance to countries with weak legal systems and providing a strong deterrent to would-be terrorists.

The ICT would have complementary jurisdiction to both national courts and the ICC, intervening only when domestic bodies were unable or unwilling to try a terrorism case or when the crimes committed were outside the ICC’s jurisdiction. It would have a prosecutor and a reasonable number of judges, nominated with a view to balanced representation of the world’s principal legal systems and geographical regions, and to gender equity. It would also benefit from the creation of a multinational police or security force able to act should a government be unable or unwilling to cooperate in securing evidence against the accused.

The court’s creation would require an international treaty or a binding act of the United Nations to ensure its universal jurisdiction. Most likely, it would be adopted through a binding resolution of the UN Security Council, with the establishment of the International Criminal Tribunals for Yugoslavia and Rwanda and the Special Tribunal for Lebanon serving as precedents.

To be sure, the creation of such a court would face difficulties, the most important of which remains the lack of consensus on what constitutes the crime of terrorism. We propose adopting a “common-denominator approach.” In addition to encompassing the acts agreed upon in existing sectorial conventions, the ICT’s jurisdiction would be based on customary international law, taking into consideration intent (was the act intended to spread fear or coerce authorities), as well as the crime’s gravity and international character.

Establishing the ICT and imbuing it with legitimacy will require the support of civil society, academia, and the general public. Obtaining this support will not be easy, particularly at a time when policymakers face so many other economic and strategic challenges. But we believe that a powerful legal instrument in the global fight against terrorism would quickly prove indispensable – easily justifying the effort devoted to its creation.

Image: People observe a minute of silence at the Trocadero in front the Eiffel Tower to pay tribute to the victims of the series of deadly attacks on Friday in Paris, France. REUTERS/Philippe Wojazer.