The scientific community has made it clear: if we do not tackle climate change now by lowering greenhouse gas emissions, global warming will become irreversible and catastrophic.

Many are hopeful that the Paris climate talks will produce an agreement between nations that will define an effective global strategy for the next century and beyond. But many believe that we are still too far from a world where renewable energy is the norm, instead of the alternative.

A recent study by the International Renewable Energy Agency (IRENA) and a paper by Stanford University bring to light the possibility of having a 100% renewables-powered world sooner than we might expect, stating that this path is both technically feasible and economically viable.

The Stanford University report lays out a roadmap for 139 countries to reach 100% renewable energy by the year 2050. Click on the image below to explore an interactive map that showcases the benefits of a transition to 100% clean, renewable power. 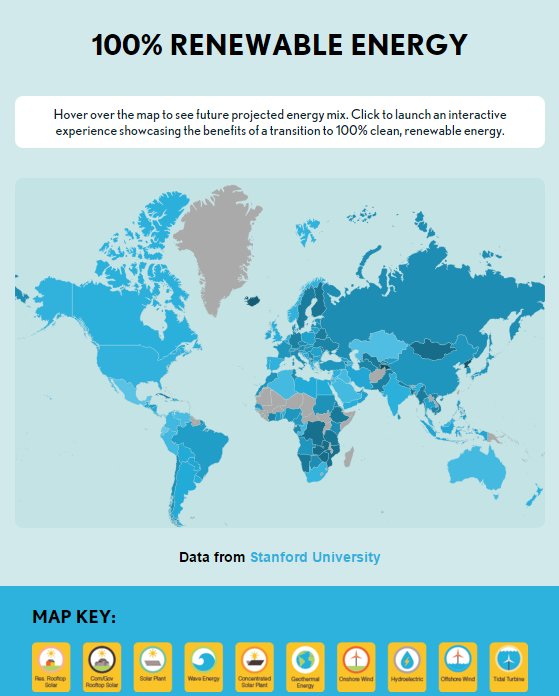 Mark Jacobson, professor and main author of the report said:

I hope that the 139 country roadmaps will give confidence to leaders of the world that going to 100% clean, renewable energy for all purposes will not only provide reliable power at low cost, but will also create 22 million more jobs worldwide.

According to the report, the transition to 100% renewable energy would generate 26.5 million jobs (each expected to last 35 years) and 24 million construction jobs for the energy facilities. The transition would also bring to an end the 4.6 million premature air pollution deaths currently happening every year.

Even though both reports make clear how a transition to a 100% renewables-powered world would be possible, we still have a long way to go before we set on a clear path towards it. There are only three countries (Norway, Paraguay and Iceland) that have converted more than 30% of their energy generation to renewables. The world average for this sort of conversion currently stands at 3.8%.

The study concludes: “The conversion to 100% renewables is technically and economically feasible. The main barriers are still social and political.”

Jacobson will be attending COP21 next week to present the report.

Have you read?
An open letter from CEOs on climate change
These countries are best prepared for climate change
A UN climate deal will boost jobs and growth

How gardens can boost biodiversity and help tackle climate change

A new campaign in the UK hopes to encourage gardeners to make small changes to help build a greener, more sustainable future.

There's a plan to bring mammoths back from extinction. Here's what you need to know

A US startup, Colossal Biosciences, has received $15 million in funding to bring woolly mammoths, who disappeared 4,000 years ago, back from extinction.

How Indonesia is protecting its 'climate guardians'

Millions more people have been exposed to floods since 2000

Why scientists are hanging rhinos from helicopters