How high can the US minimum wage go?

With U.S. wage growth still below its pre-Great Recession levels, and more than six years since the last federal increase, calls for a higher federal minimum wage seem to grow louder each day. Many activists and policymakers across the country are vigorously pushing for an increase in the minimum wage at the federal, state, and local levels.

Of course, while many people agree that the minimum wage needs to be higher, that still leaves the question of how high it should be. Unfortunately, we don’t have an easily accessible answer to that question. By looking at the available research on the minimum wage and its strength over the years, we can weigh the relative merits of specific proposals.

A wide body of research has found that raising the minimum wage has a very small to zero effect on employment. If you accept this characterization of the research, then we can say that minimum wage increases in the range that the United States has seen in recent decades don’t decrease employment. The trouble, however, is taking that research and applying it to potential minimum wage increases that would be outside the range of previous hikes. For example, raising the current federal minimum wage from $7.25 to $15—more than doubling it—would be significantly larger than prior increases. 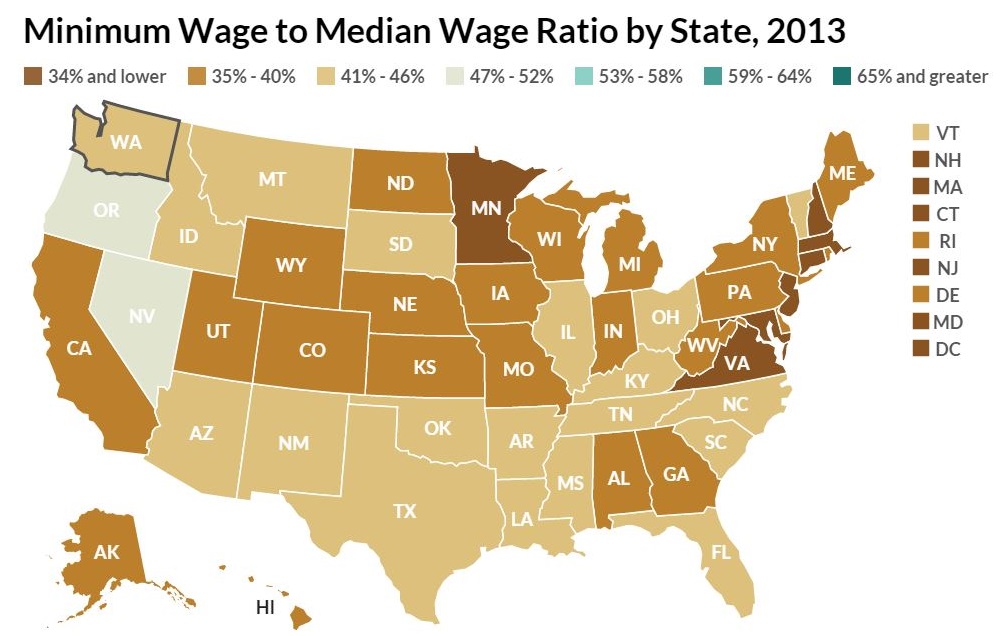 With this metric in mind, let’s do some back-of-the-envelope analysis comparing two popular proposals for the minimum wage: $12 and $15. Let’s also make two assumptions: First, the new minimum wage is phased in so that it isn’t in full effect until 2020. Secondly, the nominal median wage for the country and the states grows at 2.5 percent a year, the U.S. average from 2003 to 2013.

With those assumptions, a $12 minimum wage in 2020 would be 53 percent of the median wage. That’s a few percentage points above its national level in 1979 and very similar to what the bite was in 1968, when the U.S. minimum wage was at its highest point.  Internationally, a $12 minimum in the US would be comparable to the current bite of Australia. Arkansas would see the bite of its median wage rise to 63 percent, below its peak back in 1979.

A $15 minimum wage would have a much stronger bite, with the ratio of the minimum wage to the median wage rising to 66 percent. That would give the U.S. economy a stronger minimum wage than France, which currently has one of the highest minimum wages among the Organisation for Economic Co-operation and Development nations.

It’s worth repeating that these numbers are from a back-of-the-envelope calculation, and are sensitive to assumptions about nominal wage growth. But it’s important to take a look at historical and comparative data when the research is uncertain.

Image: A U.S. flag flies over the skyline of lower Manhattan in New York. REUTERS/Lucas Jackson.

The case for a US and European trade and technology council

Karan Bhatia, Vice President of Government Affairs &amp; Public Policy at Google explains why the US and EU should join to form a Trade and Technology Council.

These maps show the extreme variations of US population density

The Chauvin guilty verdict: Experts weigh in on George Floyd and the role of race