How much retirement income is enough in your country?

Over the rest of the twenty-first century, the global human population is expected to keep growing; more important, it will keep growing older. By the year 2100, the United Nations expects there to be more than ten billion of us, up from 7.3 billion today. In the meantime, the number of people older than 60 is expected to double by 2050 and more than triple by the end of the century.

As societies around the world prepare for swelling numbers of retirees, the policy challenge will be to ensure the financial sustainability of pension systems while guaranteeing adequate incomes for those no longer working. Today, according to recent research by Allianz, only four countries appear to have achieved this: Finland, Norway, the Netherlands, and New Zealand.

Previously, we analyzed the sustainability of the pension systems of 50 countries. Many of the countries that performed poorly on this test – most notably France, Greece, Italy, and Spain – were European welfare states where generous public pensions place heavy burdens on national finances. In 2010, the European Union’s expenditure on public pension systems amounted to 11.3% of GDP. This is expected to rise to 12.9% of GDP by 2060. Similar burdens can be observed in Japan and Brazil, indicating a substantial need for reform there as well. 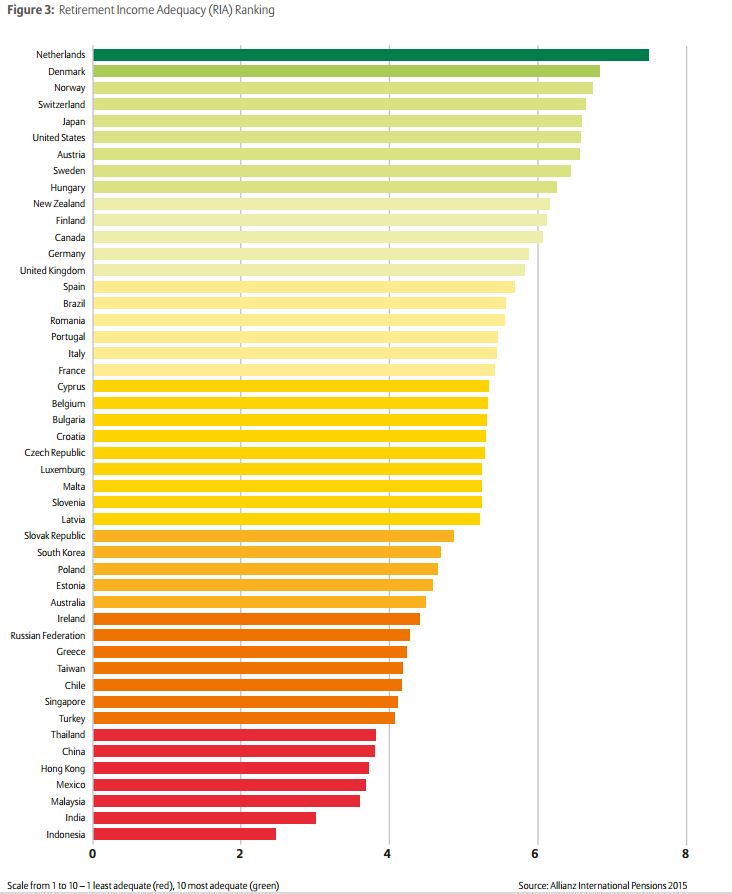 By contrast, many of the countries that ranked highly in our sustainability rankings did so because their public pensions systems covered only the bare minimum necessary to keep retirees out of absolute poverty. These include top-ranked Australia, as well as the United States, the United Kingdom, and Ireland. In these countries, retirees will need additional forms of savings and income in order to maintain the standard of living to which they are accustomed.

The first study provided us with information about governments’ ability to maintain their commitments. We have now sought to take into account whether those commitments would prove adequate to the needs of retirees.

There is no simple way to measure the adequacy of a pension system. Possible thresholds include the poverty line, a percentage of pre-retirement income, or a certain standard of living. While alternative sources of income and wealth can make retirees less reliant on public systems, elderly people’s special spending needs can increase the need for resources. The definition used in our research attempted to strike a balance, taking into account alternate sources of wealth and income as well as expenditures relevant to old age.

Notably, not all countries that scored well on sustainability were highly ranked when it came to adequacy. On the contrary, performing well on both measures was the exception.

Australia, for example, is at the top of the list for sustainability, but ranks 35th out of 50 for adequacy. Workers in Australia retire early, often have limited non-pension wealth, and face substantial living costs. Superannuation – a government-mandated private savings plan – does not yet have enough assets to compensate for the country’s relatively parsimonious public pension system. The problem is aggravated when people take lump-sum payments and do not transform their assets into an income stream for retirement. In short, Australia’s pension system may be sustainable, but it is unlikely to meet its retirees’ needs.

Since the 1990s, many countries have introduced major pension reforms, by and large moving in the same direction: sharing risk among governments, companies, and individuals in a more balanced way. These efforts are to be commended, but they also need to be strengthened if more countries are to join Finland, Norway, the Netherlands, and New Zealand in having pension systems that are both sustainable and adequate.

As societies age, the delicate balancing act between caring for today’s pensioners while ensuring the rights of future generations will become more difficult – and more important. Failure would result in overburdened and unsustainable public finances, and would expose a significant and growing group of voters to acute poverty. As any pension saver knows, the time to prepare for the future is now.

Image: A woman looks at a window display on Oxford Street in central London. REUTERS/Olivia Harris

Davos 2022: How to properly debate the future of democracy

A lively panel gathered on the first day of Davos to discuss the future of democracy, demonstrating exactly the sort of healthy debate required to nourish it.

Davos 2022: 4 leaders on the future of civic participation

Ahead of Davos, leaders from Habitat for Humanity, DataKind, Reporters Without Borders and the World Resources Institute share their thoughts on civic participation.

Can science help us understand populism, from 'malignant manicheism' to Marine Le Pen?