How should cities plan for migrants?

The world’s population is becoming increasingly urban. Sometime in 2007 is usually reckoned to be the turning point when city dwellers formed the majority of the global population for the first time in history. Today, the trend toward urbanisation continues: as of 2014, it’s thought that 54% of the world’s population lives in cities – and it’s expected to reach 66% by 2050. Migration forms a significant, and often controversial, part of this urban population growth.

In fact, cities grow in three ways, which can be difficult to distinguish: through migration (whether it’s internal migration from rural to urban areas, or international migration between countries); the natural growth of the city’s population; and the reclassification of nearby non-urban districts. Although migration is only responsible for one share of this growth, it varies widely from country to country.

In some places, particularly in poorer countries, migration is the main driver of urbanisation. In 2009, UN Habitat estimated that 3m people were moving to cities every week. In global gateway cities such as Sydney, London and New York, migrants make up over a third of the population. The proportion in Brussels and Dubai is even greater, with migrants accounting for more than half of the population.

The 2015 World Migration Report (WMR) by the International Organisation for Migration argued that this mass movement of people is widely overlooked amid the global concern about urbanisation. And the report considers the widespread challenges, in terms of service provision, for the growing numbers of people moving into cities around the world. 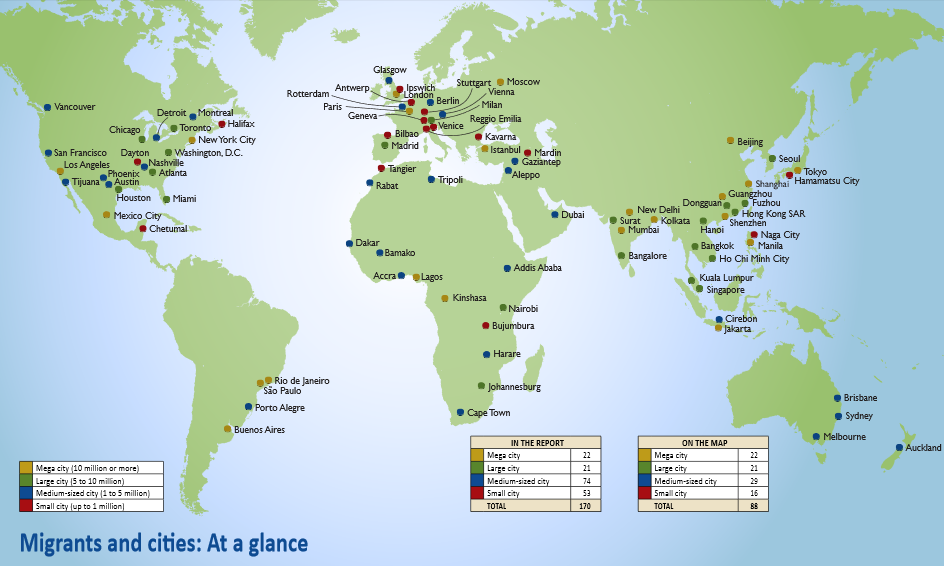 Where the significance of migration to cities is recognised, it is widely seen as a problem. In 2013, a UN study of all 193 UN member states found that 80% had policies to reduce rural to urban migration. This figure has risen substantially in recent decades, up from only 38% in 1996. It is also more pronounced in poorer countries: 88% of the least developed countries reported policies to reduce migration to urban areas.

But this negative attitude towards migration to cities may well be mistaken. The WMR argues that problems of access to services – such as housing, sanitation, education or employment – that result from rural to urban migration, are not inevitable. Rather, they are caused by poor planning. Although all socio-economic classes are reflected in migration to cities, migrants from rural areas are disproportionately poor, and inadequate planning is often a result of a weak political will to support them.

Yet, as the report pointed out, migrants are especially motivated individuals. It is not only the sheer numbers of people involved that makes migration worthy of attention. All around the world, populations of cities are now more diverse than surrounding rural areas. In this way, migrants who come to cities can help diversify the networks that the city can draw upon. For instance, by linking cities to broader global networks. Perhaps the most famous example of this is Eastleigh in Nairobi. Known as “Little Mogadishu”, this neighbourhood has become a vibrant, global commercial hub, powered by enterprising members of the Somali, Ethiopian and Kenyan diasporas.

Changing with the times

So how are cities coping and changing with this influx of both internal and external migrants? While the vast majority of migration policies are set on a national basis, it is increasingly common for cities to develop their own approach to integrating people who come to settle.

For example, in the US, many cities support legislation calling for city police forces not to cooperate with certain forms of federal immigration control, which are deemed to be prejudiced against migrant groups. In 2012, the cities of Los Angeles and Chicago passed non-cooperation measures, and in 2014, New York City became the largest city to do so.

Yet much of the research into the impact of migrants on cities concerns international migrants in wealthier countries. A key contribution of the 2015 WMR has been to turn the focus of migration to cities in poorer countries. This migration is often shorter distance, from rural areas that are relatively close.

Rural to city migration is a much larger movement of people, at a global scale, and is accompanied by a very different set of issues. Adequate housing is probably the most significant of these. Although informal settlements exist all around the world, 97% of slum dwellers live in poor countries.

My own research in Sri Lanka has shown that poor households in urban areas are more likely to be headed by women, and household members are more likely to be employed than the city’s average – this indicates that unemployment is not a key issue. Rather, problems tend to arise as a result of poor planning and forced behaviour change – particularly forced relocation. These issues are exacerbated when informal settlements develop outside the administrative boundary of the city.

For instance, in the Sri Lankan capital, Colombo, as many as 60,000 people are being relocated due to redevelopment of under-served, informal areas of the city. The project I worked on examined the impact of violence on migrants in the city. Through the surveys conducted with groups of these relocated households, we witnessed the enormous contribution that local community and neighbourhood organisations can make to help those coping with forced relocation and the disintegration of migrant communities.

Migration to cities significantly contributes to urbanisation. And if well planned, migration can enhance the dynamism of cities making them healthier, more profitable and more interesting places to live.

Author: Michael Collyer is a Reader in Geography at the University of Sussex.

Image: A view of traffic on a street. /Rafiqur Rahman.

Paris or Manhattan: Which type of city is best for reducing emissions?

As urbanization piles pressure on cities, a study of the total carbon impact of buildings suggests high-density, low-rise areas could be more sustainable.

A new guidebook for urban planners, policymakers and citizens looks at how to make city neighbourhoods cleaner and greener.

How can we create green, inclusive and innovative urban spaces?

What Stockholm can teach the world about green urban development

Afghan mayors and refugees are in danger. The world's cities mustn't fail them