In which countries do workers take all of their holiday leave?

The answer: none. But Brits take the most of their paid holiday according to research conducted by YouGov. They also receive the second-highest average number of days of leave.

The following chart shows the percentage of workers who take all, or almost all, of their paid holiday, as well as the median number of days of paid leave. 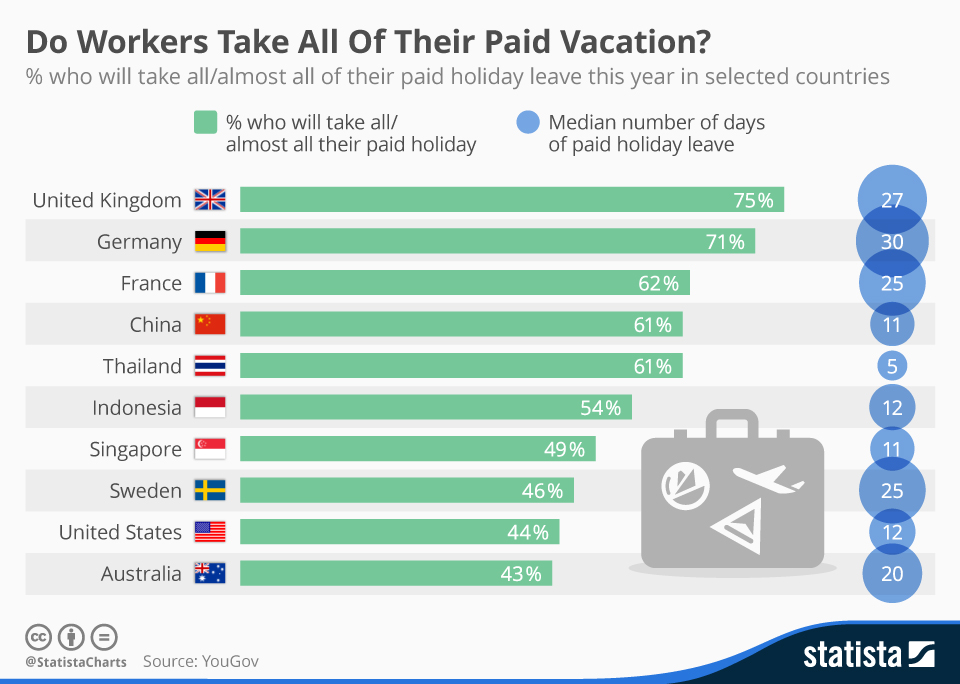 Following the United Kingdom is Germany, where 71% of workers take all of their paid holiday. The Germans also receive the highest average number of days off – 30 days a year. France at 62% (nearly 10 percentage points lower) completes the top three.

Four Asian nations appear in the middle of the list – China, Thailand, Indonesia and Singapore – while the US and Australia are ranked at the bottom. In these countries, workers take only 44% and 43% of their holiday respectively.

Have you read?
Do women work longer days than men?
Which countries work the shortest hours – yet still prosper?
What working long hours does to your body

Image: A woman enjoys the sun on the Promenade des Anglais REUTERS/Eric Gaillard

1 In 2 Workers Are Worried About Losing Their Jobs

No commuting, saving money and an improved work-life balance are the most popular benefits of remote working, according to Slack’s ‘Remote Employee Experience Index’.

What you need to know about equity, inclusion and social justice in the workplace

Tech and COVID have transformed how we work: here's what to expect from the Jobs Reset Summit