Melinda Gates: This is how contraception is changing women’s lives

Three years ago, at the 2012 London Summit on Family Planning, the global community committed to increasing access to contraceptives for 120 million more women and girls by 2020. The findings have been encouraging. According to a new report released by Family Planning 2020 (FP2020), more women than ever before have access to contraceptives and in the past three years alone there were an additional 24.4 million women.

This means that in the past year alone these women have averted, 80 million unintended pregnancies, 26.8 million unsafe abortions and 111,000 maternal deaths.

In an exclusive interview with Mail & Guardian Africa, almost five years from the 120 million goal post, we take stock of the progress that Africa has made with Melinda Gates,  of the Bill & Melinda Gates Foundation a key figure in this movement. She holds family planning and women and girls health as one of her top priorities.

“Family planning is vital,” said Melinda, “if women can space their births, they can then afford to feed and educate their children and to also participate in the economy. The woman will be able to lift her family out of situations of poverty because we know that they will plough their money back into the household.”

She was encouraged by the progress made across the continent, with the most rapid acceleration in modern contraceptive prevalence rate seen in Burundi, Kenya, Lesotho, Malawi, and Senegal. She explained that one of the areas of most concern though had been West Africa. A region which had, with an average of 5.5 children per woman, one of the highest fertility rates which results in many unplanned pregnancies that posed serious health risks for mothers and children.

A turning point however came with a conference in Ouagadougou, Burkina Faso, in 2011 when representatives from eight Francophone West African countries came together and pledged to take concrete actions to increase the uptake of family planning in their respective countries. They st a target of reaching 1 million more women with modern contraceptives. Today, the region has reached 2.3 million more women, though it was extremely challenging since some of the countries are quite socially conservative.

Melinda was however pleased to announce however that some of the most conservative countries had made incredible progress, Niger for example, “exceeded [its] target by 200,000 women.” She explained that this success can in part be attributed to the cultural perspective approach whereby they would “teach the husbands first so the wives could get access.”

In Niger’s case, the “School for Husbands” programme offers an innovative approach to the widespread problem of male opposition to women’s use of contraception. In these informal village schools, men are educated on the importance of reproductive health care and encouraged to support their wives’ access to family planning. With the help of the United Nations Population Fund (UNFPA), Niger has successfully scaled up the programme across the entire country with1,000 schools in all.

Melinda also highlighted encouraging progress in East Africa. In Kenya for example she stated that “there was an increase in access to contraception by over 11% in five different cities”. According to the new FP2020 report, Kenya registered a striking increase in its contraceptive prevalence rate (CPR) for married women, which rose from 46% in 2009 to 58%. This exceeded the government’s own goal of achieving a 56% CPR by 2015.

Much of the improvement can be attributed to Kenya’s shift to community-based distribution of injectable contraceptives, a nationwide effort led by the Ministry of Health and Jhpiego with support from the Bill & Melinda Gates Foundation. One of the reasons this has been so successful is because women in rural areas that want to use contraception, but do not have support from their husbands, can have injections independently.

Melinda also cited Ethiopia as another East African success story, having “increased access from six to 40%” since 2000. Aside from cultural barriers, another major challenge in the push for family planning is access to women or clinics and information sharing – particularly in countries that have poor infrastructure.

This is something that Ethiopia managed to deal with and which contributed to its success. The government has a health extension program which invests in a network of 38,000 frontline health extension workers based at 17,000 health posts to bring education and contraceptive products and services to rural areas that previously lacked trained personnel and facilities. 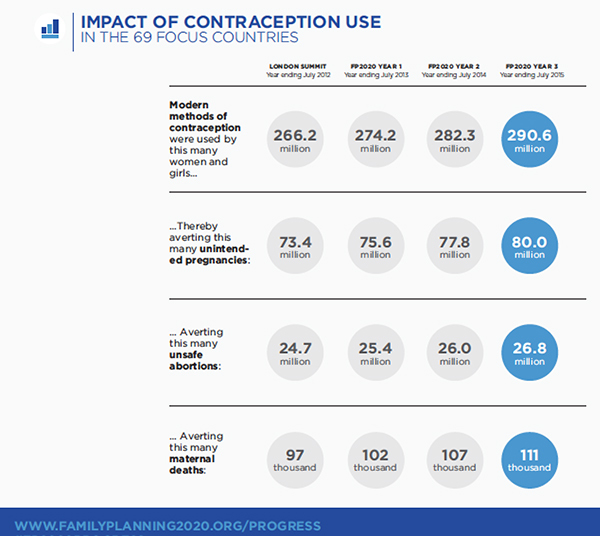 With innovations and projects like these, even though they have another 100 million more women to reach before FP2020 reach their goal, Melinda is optimistic.

The future
She explains that they now have great data – courtesy of the FP2020 database  – which enables partners to keep track and, every 6 months, look at the different services, stock-outs and experiences from each country – seeing what works and what doesn’t.

In the case of the Bill & Melinda Gates Foundation they are expanding their FP2020 commitment, pledging to increase their financial investment by 25%, an additional $120 million over the next three years.

Melinda explained that this new funding will be concentrated in three areas which reflect the continent’s direction: enabling social marketing organisations to reach greater scale, family planning in urban contexts to keep up with the high rates of urbanisation, and investing in a new learning agenda for adolescents and youth.

Author: Samantha Spooner is an Editor/Researcher/Writer for Mail & Guardian Africa.

Image: A woman holds her newborn baby in a nursery in the Juba Teaching Hospital in South Sudan. Very few births in South Sudan, which has the highest maternal mortality rate in the world at 2,054 per 100,000 live births, are assisted by trained midwives, according to the UNDP’s website.REUTERS/Andreea Campeanu.