Top 10 most gender equal countries in Europe and Central Asia

European countries dominate the overall rankings of the Global Gender Gap Report 2015, with 7 nations in the top 10.

The report, now in its tenth year, ranks 145 countries on their ability to close the gender gap in four areas: economic participation and opportunity, education, health and survival, and political empowerment.

Today, Europe and Central Asia has closed 72% of its overall gender gap. 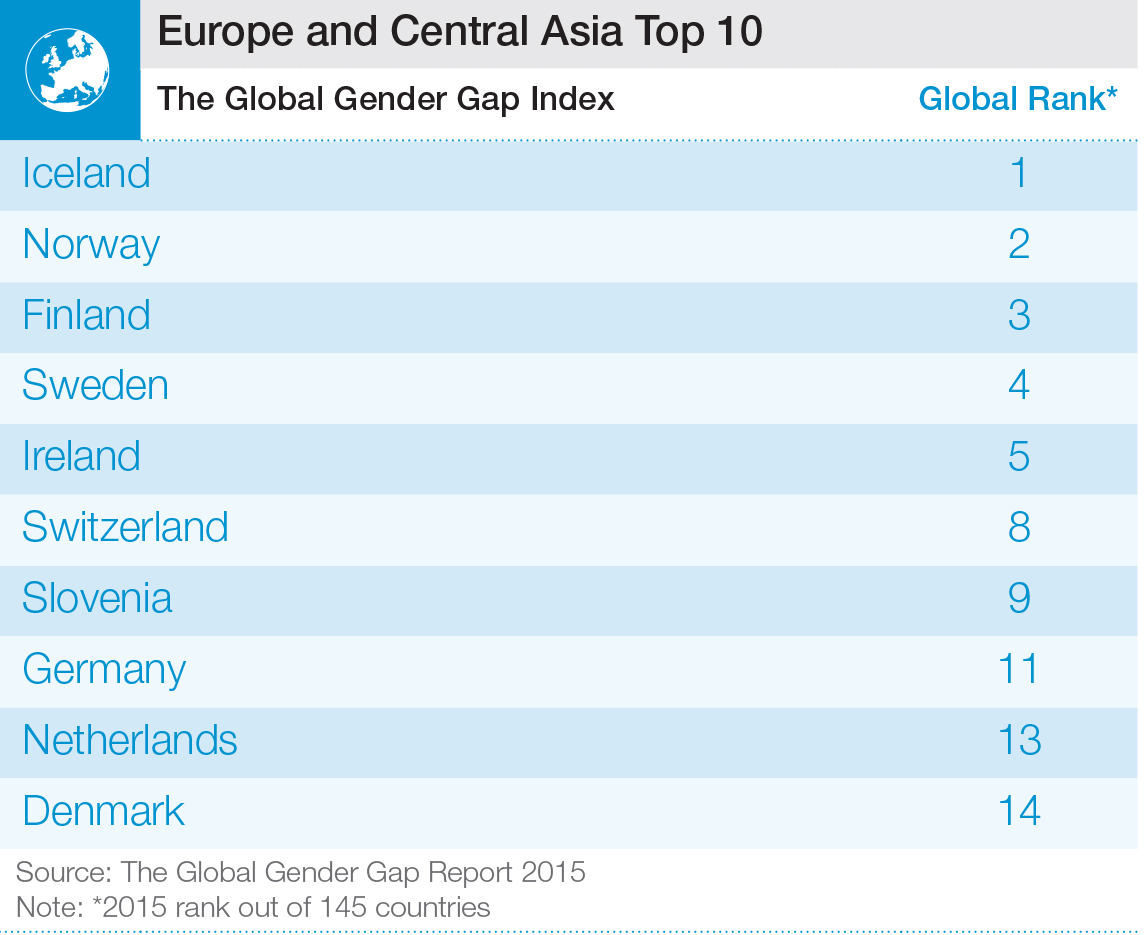 1. Iceland (1st in global rankings) is for the seventh straight year the top performer on the overall index. Compared to 2006, Iceland has fully closed the educational gender gap and ranks first for political empowerment, having had a female head of state for 20 of the past 50 years. It is also the country with the longest paternity coverage, with new fathers entitled to 90 calendar days.

2. Norway (2) climbs back up to second place, after losing the position to Finland  for the last three years. It’s the top country overall for women to rise to positions of enterprise leadership. Norway also has the smallest difference between the average minutes spent per day on unpaid work by men and women.

3. Finland (3) falls to third, but remains the highest-ranked country from the European Union. It is one of four countries from the region that has fully closed its gender gaps for educational attainment and health and survival sub-indexes. With a government that is 63% female, it is also the highest ranking country for women in ministerial positions.

5. Ireland (5) gained three places compared to 2014, mainly due to improvements to the economic and political sub-indexes. It is the highest-ranked country in the region in terms of years with a female head of state.

6. Switzerland (8) re-enters the top 10 of the global rankings, after dropping out in 2014. This is mostly due to improvements to economic participation and opportunity as well as education and political empowerment. It is among the top performers for women in ministerial positions.

7. Slovenia (9) enters the global top 10 for the first time. Out of the 109 countries that have been part of the index since 2006, Slovenia has shown the fourth biggest increase. Since 2006, all its sub-indexes scores have improved. Forty-four percent of the country’s ministers are women, compared to 18% in 2014. After Iceland, Slovenia has the second longest paid paternity leave.

8. Germany (11) Germany’s strong position is largely due to its good overall performance in the economic participation and opportunity and educational attainment indices. But Germany does have one of the lowest percentages of women on the boards of listed companies (2.8%).

10. Denmark (14) is in its lowest position since the creation of the index. Compared to 2006, its overall score has steadily improved, but it has dropped significantly on the economic, health and political sub-indexes, compared to last year. Denmark remains the country with the highest average minutes spent per day by men on unpaid work.

Companies and governments need to ensure that those developing artificial intelligence don’t perpetuate or accelerate bias.

More work is needed to achieve the SDG education and gender targets by 2030 – especially in the midst of the COVID-19 pandemic.