Which wealthy countries have the worst inequality?

Inequality is on the rise in several of the world’s developed economies. This is the finding of a new Morgan Stanley report on inequality.

To calculate their inequality indicator (known as the MSII), Morgan Stanley uses a variety of factors, moving beyond the commonly used GINI coefficient to include measures of wage dispersion, workplace inclusion, health status and digital access. The report argues that this multifaceted approach allows for a more nuanced view of inequality.

The following chart shows scores across these variables for the countries assessed in the report, and highlights performance across all these indicators. A score of 1 indicates the highest levels of inequality. 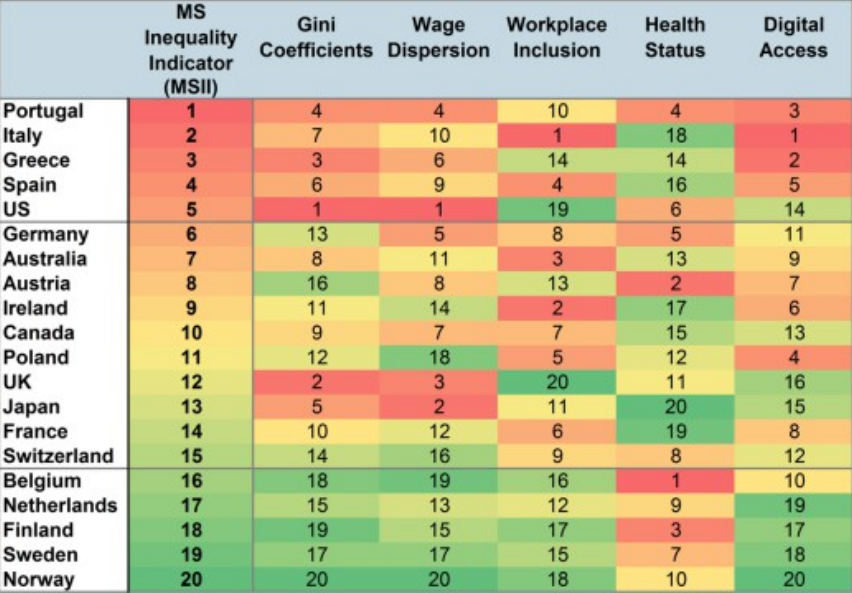 Southern European nations and the United States have the highest levels of inequality, according to this chart. It also reinforces the traditional view that inequality is lowest in the Nordic countries, with Norway, Finland and Sweden being named the most equal societies.

These new scores emphasize the complex nature of inequality, and the potential importance of looking beyond just the GINI coefficient. For example, if we consider the case of the United Kingdom, based on the coefficient alone it would be the second most unequal society. However, Morgan Stanley would argue that this isn’t representative of the bigger picture; when other factors are considered the UK comes in at number 12.

Have you read?
Who are the 1%? The answer might surprise you
Stephen Hawking: ‘Technology seems to drive inequality’
Why the wealthy don’t understand income inequality