Why do immigrant communities tend to work in certain industries?

The book Blue Dreams: Korean Americans and the Los Angeles Riots relates the story of Yun, a Korean university graduate who came to the US in the late 1970s to pursue higher degrees in mathematics. He ended up abandoning those plans to join a relative in running a small store selling trinkets. “There is an expression here: ’What you do depends on who picks you up at the airport,’” he noted. “I, too, followed my relative into the same business.”

This story reflects the broad tendency among immigrant populations to concentrate around specific industries and entrepreneurship. This is not a new phenomenon; historical examples of ethnic specialisation range from the Jews in Medieval Europe to the Japanese in South America. Fairlie (2008) shows that immigrants are much more likely to be self-employed entrepreneurs than natives. Kuznets (1960) observed that “all minorities are characterised, at a given time, by an occupational structure distinctly narrower than that of the total population and the majority.” This is demonstrably true in the US; for example, our data (further described below) show that Eritrean immigrants are 61 times more likely to be taxicab drivers than the average American. As in Yun’s story, this is frequently the result of social interactions within the group.

In recent research, we explore the occupational stratification of immigrant populations in the US (Kerr and Mandorff 2015). We first construct a model demonstrating how social interactions within immigrant groups lead to occupational clustering. The model pinpoints the size of the community and its social isolation as key factors contributing to this effect. Furthermore, the model predicts higher earnings among members of an ethnic group who share the same occupation. We then demonstrate and quantify these predictions empirically.

An extensive literature exists on the connection between social interactions and economic behaviour, much of it related to economic behaviour outside the workplace (e.g., Glaeser et al1996). Others have noted the effect of social interactions on employment – for example, Granovetter (1973) found that jobs are often found via referrals, which in turn tend to come from ‘weak ties’ (i.e., casual acquaintances). Patel and Vella (2013) provided evidence that networks in the immigrant labour market draw new arrivals into similar occupations as their countrymen, and that this leads to higher earnings within the chosen industry. Fairlie and Robb (2007) showed that more than half of business owners have close relatives who are self-employed, and a quarter have worked for those relatives. Kerr and Kerr (2015) show the continued rise in ethnic entrepreneurship for the US.

Our model expands this picture by positing social interaction as a mechanism for skill acquisition. Tacit knowledge and personal insights can be instrumental to higher productivity, especially among the self-employed, and these skills and information can be conveyed at low cost through informal social interactions. These interactions would be natural within settings unique to specific groups, thereby facilitating skill acquisition keyed to specific industries (e.g., Chung and Kalnins 2006). This, in turn, can incentivise concentration around those industries.

Our model identifies a function of entrepreneurial productivity that is increasing in specialisation; that is, the more concentrated the minority group is in a specific trade, the more productive it becomes. The model’s equilibrium shows that not only will groups become more and more specialised, but also that earnings will be positively correlated with the degree of specialisation.

To examine these ideas empirically, we construct a sample of US immigrant and native workers from the 2000 Census of Populations, using the Integrated Public Use Microdata Series.

We quantify ‘overage ratios’ for pairings of ethnic groups and industries, defined as the ratio between a group’s concentration in a certain industry and that industry’s national employment share. For example, 1,654 out of 6,628 Gujarati Indians in the sample (about 25%) work in hotels and motels, while only 0.23% of the general population do, giving the pairing {Gujaratis, hotels} an overage ratio of 108. For our primary metric, we average the overages of all industries for each group, weighted by the percentage of the group’s workers employed in the industry.

The results are striking. Fifteen ethnic groups show industrial clustering over 10 times greater than the native population. Results are broadly robust to changes in the overage aggregating metric. As frequent travellers will likely guess, the taxicab industry is particularly prone to overrepresentation among immigrant groups – it is the industry of maximum concentration for 17 groups, more than any other occupation. 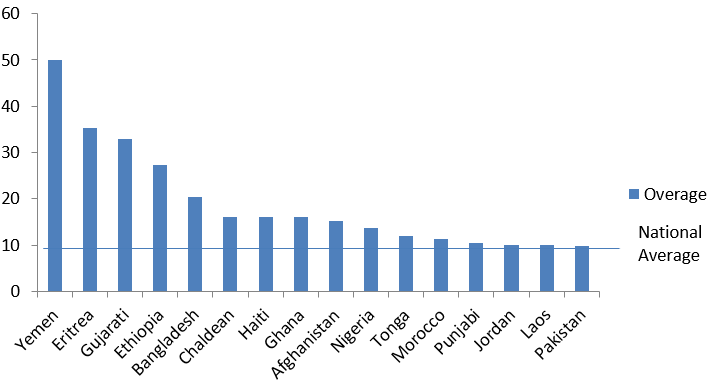 We then ask what factors contribute to, or detract from, this disposition. To explain stratification, we test the roles of size and group isolation. All but one of the 16 groups in the above graph have in-marriage rates of 64% or higher, indicating very high levels of social segregation. These groups also display a strong positive correlation between in-marriage rates and our overage metrics.

To address the concern that higher specialisation in a group might lead to smaller size and greater isolation (rather than the reverse), we employ two instrumental variable strategies. First we instrument the size and isolation variables for 2000 using data from the 1980 census, under the assumption that these characteristics have persistent effects, as shown in the empirical work of Patel and Vella (2013). The results remain very close to our original analysis. Next, we instrument size with a gravity model (in which immigrant population size is correlated with the size of the home country’s population and its distance from the US) and proxy the US isolation rate with the in-marriage rate of the groups in the UK in 1991. Findings are again similar to the original results, with the size effect slightly weaker but the isolation effect even stronger.

Finally, we test our model’s prediction that specialisation will lead to higher earnings in the group. We show that a 1% increase in the group’s concentration is linked to a 0.6% increase in total earnings, strengthening the idea that economic incentives help fuel occupational clustering.

The tendency of immigrant populations to cluster around specific industries has wide-ranging ramifications for the US economy and beyond. We propose that even with full market integration and barring discriminatory effects, immigrants will be drawn to the same industries as their countrymen due to the ease of diffusing skills through social interactions in the group. These effects can, however, change over time, as shown by the central role played by the size and social isolation of the group.

Our findings contribute to research on both the internal dynamics of immigrant integration and the roles played by immigrants in the broader economy. We hope that these results can be further expanded by looking for similar effects outside the US; examining the persistence of the effects across generations; and connecting the paper’s ideas to ethnic enclaves, entrepreneurship, and employer-employee data.

Chung, W and A Kalnins (2006) “Social capital, geography, and the survival: Gujarati immigrant entrepreneurs in the US lodging industry”, Management Science, 52(2): 233-247.

Fairlie, R (2008) “Estimating the contribution of immigrant business owners to the US Economy”, Small Business Administration, Office of Advocacy Report.

Author: William Kerr is a Professor at Harvard Business School. Martin Mandorff has been the Deputy Chief Economist at the Swedish Competition Authority since 2011.

Only 7% of companies focus on creativity, analytics and purpose as a combined priority, yet businesses that do enjoy revenue growth rates of around 12%.

Waves of change: Understanding the driving force of innovation cycles

Expert Dorothy Neufeld has analyzed the 6 different waves of innovation, from water power in 1775 to robots and drones in 2020.

'Makerspaces' boost community resilience. It's time to support them