Change is created by turning points. Whether through evolution or revolution, turning points in history have changed the way we think, move, communicate, live.

We are at a turning point now. A decisive hour when a historical event occurs, when a decision must be made, when we have understood that the consequences of the past need us to intentionally and decisively redefine the future. 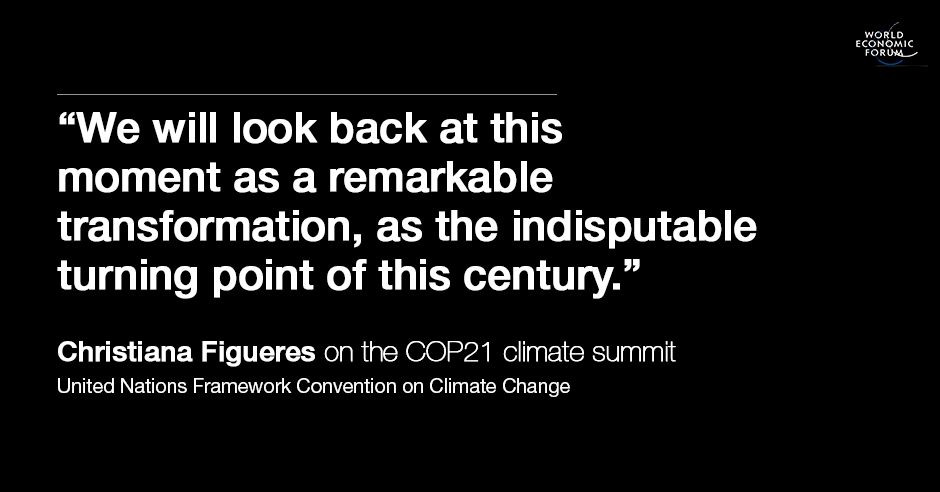 The latest session of the climate change negotiations took place recently, and while I work in this process to support the governments of the world to adopt a legally-binding climate agreement, we should remember that international negotiations don’t cause change, they mark it. The change has already been happening in the “real economy” through a series of mutually reinforcing and increasingly powerful drivers:

The net result is a world ready for change.

Political will has arrived: the 196 countries in the UN negotiations are committed to achieving an ambitious global climate agreement. There is remarkable leadership from many countries, best seen through the 156 national climate plans put forward by nations covering more than 86% of emissions. This is the beginning of a blueprint for our future.

Over the next eight weeks, until the conclusion of the Paris climate summit, I will be writing a series of blog posts in which I will explore the ways in which the world has reached the critical turning points that are finally enabling us to come together to manage the systemic threat of climate change and create a future that is made brighter by the economic, moral and political choices we are collectively now deciding to take.

We will look back at this as a moment of remarkable transformation, as the indisputable turning point of this century. Let us open our eyes now and see it as it happens.

Reforesting surface-mined land can be tricky – but this US nonprofit is doing just that to help reduce the impact of climate change and create local jobs.

These are the 10 key actions needed to save the Amazon rainforest, scientists say

We can help beat the climate crisis by investing in nature