All of us wish to feel a sense of purpose in our careers and make a meaningful contribution to society, but it can be hard to know where to start. Social entrepreneurs offer a fascinating model. They combine compassion and business acumen to scale solutions that are needed now more than ever.

More than a year in the making, this video series featuring leading Schwab Foundation Social Entrepreneurs talking about their journeys is packed full of surprising insights, powerful ideas, and lessons learned the hard way.

Whether you are an established social entrepreneur, a corporate executive considering your next career move, or a recent graduate launching a start-up, these videos constitute essential viewing. 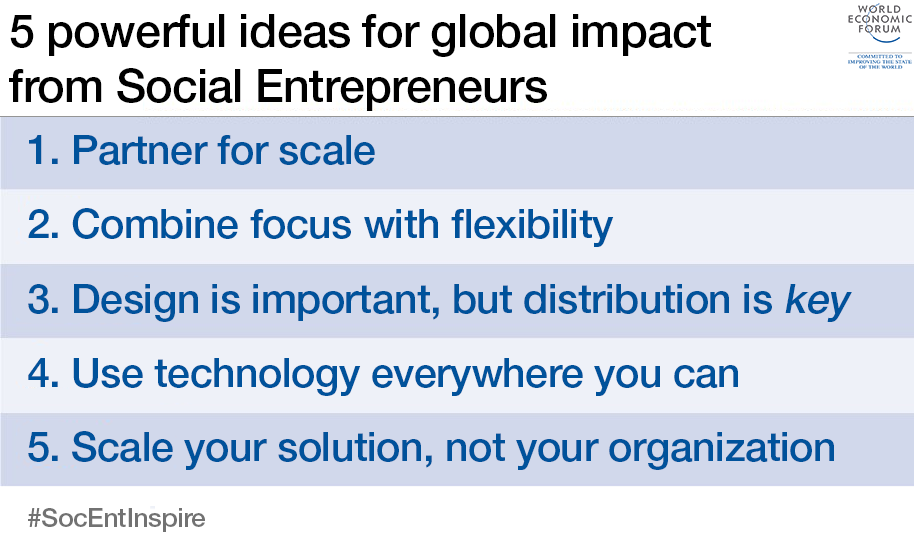 Martin Burt draws on decades of experience to explain why the era of the lone social entrepreneur is over. And he should know: he is the widely celebrated founder of Fundacion Paraguaya, Teach a Man to Fish, and most recently, the Poverty Stoplight, a diagnostic tool that allows families to diagnose their level of poverty and create an action plan to overcome it. In Paraguay alone, dozens of companies are using the tool to eliminate poverty among their labor force. “We are seeing businesses talking to the government about the housing needs in the slums near their factories,” he says, “and they are finding they have something nobody else has: the power of leverage.”

Martin Burt also draws on his experience in the public sector as the Mayor of Asunción and later as the Chief of Cabinet in the previous administration. The keys to success? Start by recognizing that government officials face structural and legal limitations, then strive to identify and empower elected officials who genuinely want to create change.

Mark Ruiz was an executive at Unilever in the Philippines when he had an insight that led him to create the social enterprise Hapinoy with his co-founder, Bam Aquino. Why can Coke products find their way to every rural village, but medicines and financial services do not? Rather than create a new distribution network from scratch, Mark and Bam decided to piggyback off of existing infrastructure – tiny “hole in the wall” stores called sari-sari shops – by formalizing them into a network, thereby creating a channel to get much-needed services such as mobile banking into rural communities.

His advice to other social entrepreneurs? Never lose sight of your social mission. Make sure your investors have the same values as you. Find ways to create economies of scale to attract large companies as partners. And most importantly, follow your passion. “You cannot be the best at everything,” he says. “Ultimately, you have to decide what you’re going to be the best at, and that entails a certain focus.”

D-Rev is a non-profit social enterprise that designs and develops medical devices for poor people such as prosthetic knees for amputees and phototherapy units to treat jaundiced babies. d.light is a for-profit social enterprise that has distributed more than 50 million solar lights and power solutions to off-grid households. Both organizations are widely respected as market leaders in human-centered design, and both Krista Donaldson, a mechanical engineer and CEO of D-Rev, and Ned Tozun, a co-founder of d.light, offer surprising insights about the design process.

Given both social enterprises are so famous for their product design, it is telling both Ned Tozun and Krista Donaldson emphasize distribution as the toughest nut to crack. “We thought if you have a great product at a great value for money, it’s just going to sell,” said Ned Tozun. “But distribution, marking, and branding required even more innovation than on the product side.”

“We realized early on we can’t do everything, so we work with partners – NGOs, faith-based groups, and for-profits – to achieve our mission, which means getting our products to our target users,” says Krista Donaldson. “Once the product hits the market, it needs to be entirely economically self-sustaining with profit margins built-in so that if D-Rev disappears tomorrow, the product will continue to be sold.”

Lesson 4. Use technology everywhere you can

Dr. Shannon May, an anthropologist, and Jay Kimmelman, a tech entrepreneur, founded Bridge International Academies in Kenya in 2008 with the goal of providing affordable world-class education to families living on $2 a day. In less than seven years, Bridge International Academies has opened 400 schools serving 120,000 students and aims to reach 10 million students in the near future. They have achieved such staggering scale by using technology at every step, from how they process school fees and assess student performance on a weekly basis to how they distribute daily lesson plans to every one of their 5000 teachers and even monitor teacher arrival and departure times.

Shannon May’s advice to social entrepreneurs is simple, though executing it is anything but. “Leverage technology everywhere you can to make the radical disruption you are seeking,” she advises, and she would know. Mark Zuckerberg of Facebook was so impressed with Bridge’s use of technology he invested $10 million in them after a meeting in Davos.

Lesson 5. Scale your solution, not your organization

All social entrepreneurs, even those who by any objective measure have reached significant scale, are frustrated by the staggering gap between the people they can reach through their direct service model and the size of the global need. Kovin Naidoo movingly described this phenomenon as “being responsible for an island of success in a sea of despair.” Solving the social problem you are passionate about at massive scale is the dream of every social entrepreneur. The question is, how do you get there? The insights of Sébastien Marot and Elizabeth Hausler start to offer some answers.

Sébastien Marot founded Friends-International in Cambodia to rebuild the futures of homeless and marginalized children. Even working with such a deeply challenging population, Sébastien found a way to improve the sustainability and scalability of his intervention by turning all of their vocational programs into social businesses that now generate 40% of the organization’s overall operating budget. Even so, the numbers of marginalized youth Friends-International can reach directly – 50,000 in eight countries – pale in comparison to the half a billion marginalized children and youth worldwide. Rather than expand his organization, Sébastien is spreading his market-based approach through the CYTI Alliance, a network of 51 organizations working with homeless and marginalized children in 11 countries.

A skilled mason with a doctorate in civil engineering, Elizabeth Hausler founded Build Change in 2004 to change the way post-disaster reconstruction is done. “We started small and on the ground,” she says. “We got our hands dirty figuring out how to actually build an earthquake-resistant house.”

Recognizing she would never been able to hire enough engineers and builders to respond to disasters, Elizabeth instead open-sourced the Build Change methodology. Build Change’s design and safe construction guidelines are now used by dozens of other NGOs and have been adopted by seven major relief agencies. “We’ve expanded our model from a direct service approach to a system change approach,” Elizabeth Hausler explained.

Ned Tozun of d.light offers one final piece of advice to social entrepreneurs. “To all of the social entrepreneurs out there, persevere and keep at it,” he said. “If you’re thinking about taking the plunge, I really encourage you to do it. It’s the most fulfilling thing I could imagine doing.”

Author: Katherine Milligan is the head of the Schwab Foundation for Social Entrepreneurship at the World Economic Forum.

Image: Survivors of Typhoon Haiyan learn how to sew eco-friendly waterproof backpacks at the factory set up by Taclob, a social enterprise in Tacloban, October 17, 2014. REUTERS/Thin Lei Win

In collaboration with Deloitte, and in partnership with Catalyst 2030, Euclid Network,Motsepe Foundation and the Schwab Foundation for Social Entrepreneurship

With a choose-your-own-adventure style, the ARC game is structured to move players methodically and logically through problem-solving, improving them.