5 reasons to be hopeful about ending deforestation

We know that global demand for agricultural and forest commodities is soaring. Predictions suggest the world’s population will reach nine billion by 2050, and more people means more mouths to feed.

The sad reality is that over the past decades, meeting the rising demand for food and consumer goods has often come at the expense of forests, making commercial agriculture the main driver of tropical deforestation. Inefficient production schemes, missing or unclear economic and financial incentives for sustainable choices, poor governance structures and complex supply chains have contributed to this outcome. The devastating haze and forest fire crisis in Indonesia is a clear example of this negative cycle.

This cycle has to stop. Halting forest destruction is one of the easiest and most cost-effective ways to prevent catastrophic climate change. The good news is that the international community is getting serious about the potential to optimise the role of forests in climate change mitigation and adaptation.

Following a strong Paris agreement – including much-needed acknowledgment of the critical role that forests play in combatting climate change – there has never been a better time to work together to protect the world’s remaining tropical forests.

We don’t have all the answers and the road ahead will not be easy, but here are five reasons for hope right now.

Brazil has successfully decoupled agricultural production from deforestation in the Amazon forest – where agriculture output has been growing while deforestation rates have dropped substantially. Since 2005, through a combination of public policy and private sector actions, deforestation has reduced by 70% – keeping about 3.5 billion tonnes of carbon dioxide out of the atmosphere. 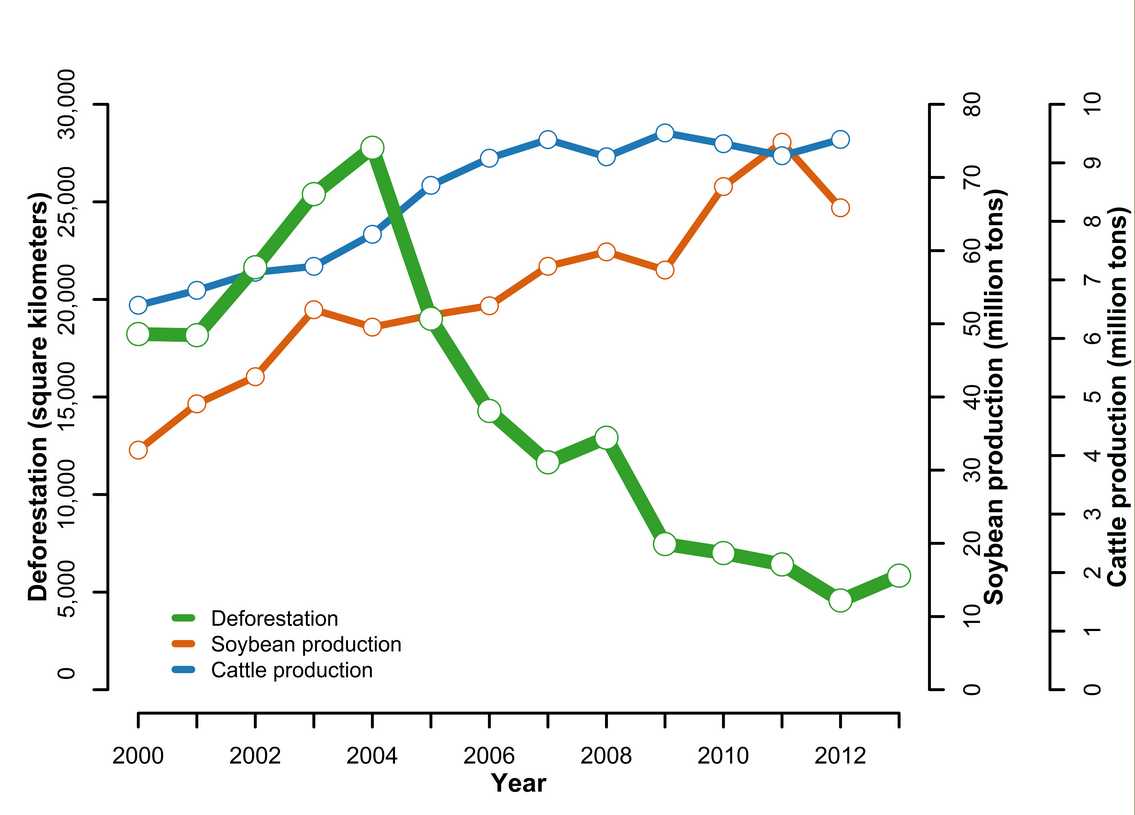 The Paris agreement sent a strong message to the international community about the importance of forests. All countries agreed on simple but strong language that operationalises forest protection.
The inclusion of REDD+ Reducing Emissions from Deforestation and forest Degradation as a standalone piece – Article 5 – in the final Paris agreement sends a clear signal that the period of mass forest destruction is drawing to a close.

The outcome from Paris also gives an excellent basis for public private partnerships to focus on converting entire jurisdictions (geographic areas in a country) to increase production while improving forest protection – what we call ‘production-protection’.

This approach is promising but not without challenges, as the Global Agenda Council paper on Better Growth with Forests highlights, therefore the solution models must be creative and nationally appropriate for transformational outcomes.

The ultimate aim is to create a “triple win”: to deliver rural development and domestic economic growth, while protecting and restoring forests on a large scale.

During the Paris negotiations Marks & Spencer and Unilever announced an intent to prioritise commodity sourcing from areas practicing sustainable agricultural production, forest protection and protection of livelihoods, with support from forest and donor governments and other consumer goods companies. The model provides jurisdictions with the design, technical support and necessary funding to develop implementable plans, while creating a global community of purpose to pilot and create investment-grade replicable partnerships and solutions.

What we now need is for more sub national leaders and consumer goods companies to join the Tropical Forest Alliance 2020 (TFA2020). This will allow all parties to come together via large bilateral and multilateral programmes to support jurisdictions (national or subnational governments) in developing and implementing landscape-level plans to reduce deforestation while putting smallholders and communities at the heart of the agenda.

More than 1.6 billion people worldwide depend on forests for food, medicines and fuel, as well as their jobs and livelihoods.

A key requisite for the ‘production-protection’ approach, is that jurisdictions have a strategy for how to reduce emissions from forests and other lands whilst increasing agricultural productivity and improving livelihoods.

Increasing agricultural productivity will have a profound effect on smallholder farmers in particular – in their role of producers, custodians of biodiversity and vendors – the more we can help them better manage land and improve their productivity, the more their livelihoods will improve.

In reality, production of the commodities that we all rely on is not possible without protecting the land, forests and communities involved.

The number of people focused on this agenda is growing. The Consumer Goods Forum and Tropical Forest Alliance bring together over 100 actors from business, government, and civil society. And through the New York Declaration on Forests, about 180 nations, companies, indigenous people and other organisations committed to halve deforestation by 2020 and stop it by 2030, while at the same achieving ambitious conservation, reforestation and forest restoration targets.

The critical mass of forest nations, donor governments, global agricultural commodity companies, consumer goods companies and funding partners that are now behind this goal is unprecedented.

We want to be optimistic – and this is indeed the moment in time to be so — but we realise many challenges still lie ahead. 2016 is an opportunity for us all to collaborate and show the world this can be done.

Have you read?
How can we save the world’s forests?
Are we losing our forests more quickly than we thought?
Why forests are critical to achieving the Global Goals

Author: Jeff Seabright is Chief of Sustainability, Unilever, and Co-Chair of the World Economic Forum Global Agenda Council on Forests

Image: Deforestation is seen in a village in Carhuaz in the Andean region of Ancash, Peru, on November 28, 2014. REUTERS/ Mariana Bazo

Knowing demand for food will only rise, we need more collaboration to find ways to produce more healthy, nutritious food with a smaller carbon footprint.

The global food system is in crisis, here's how we can stop a humanitarian disaster

Five hundred million people could face acute hunger over 2022/23, so, stabilizing the global food system sustainably and through collaboration is urgent.

Ertharin Cousin and Rodrigo Santos 25 May 2022

How companies can accelerate and galvanize food system transformation

How can we protect food systems against global shocks? Here's what business leaders say