Argentina’s new president wants to overhaul the economy. Will it work?

Last week, the government of newly elected Argentine President Mauricio Macri launched a bold plan to revitalize a bruised and beleaguered economy plagued by high inflation. At a time of daunting crisis conditions, one should not underestimate the importance of this move not just for Argentina, but also for other countries, where leaders are watching closely for clues about how to deal with their own economic woes.

Thanks to years of economic mismanagement, Argentina’s economy has been badly underperforming for decades. Previous governments sought to avoid difficult policy choices and obfuscate fundamental issues by implementing inefficient controls that grossly misallocated resources and undermined Argentina’s ability to generate the foreign-exchange earnings needed to cover its import bill, resulting in domestic shortages. The recent drop in commodity prices has exacerbated the situation, depleting what little growth dynamism the economy had left, while fueling inflation, deepening poverty, and spreading economic insecurity and financial instability. 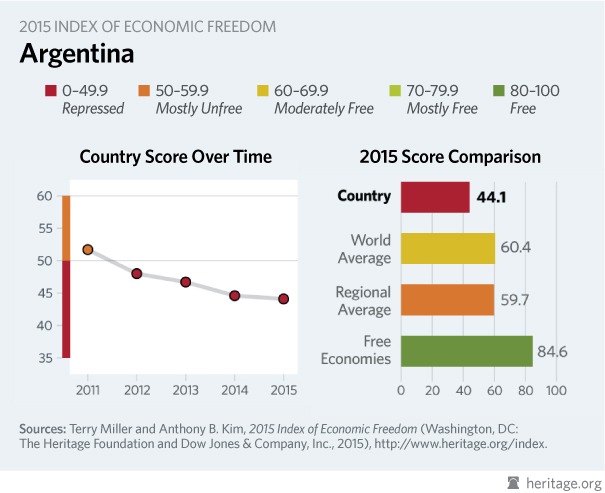 In theory, governments in such a situation have five basic options to contain crisis conditions, pending the effects of measures to reinvigorate growth and employment engines.

· Run down the financial reserves and wealth that were accumulated when the economy was doing better.

· Borrow from foreign and domestic lenders.

· Generate revenues through higher taxes and fees, and earn more from abroad.

· Use the price mechanism to accelerate adjustments throughout the economy, as well as in trade and financial interactions with other countries.

Through careful design and sequencing, these five measures can help not only to deal with immediate economic and financial problems, but also to create the conditions for higher growth, job creation, and financial stability in the longer term. In this manner, they can contain the spread of economic hardship among the population, protect the most vulnerable segments, and put future generations on a better footing.

In practice, however, governments often face complications that undermine effective implementation of these measures. If policymakers are not careful, two problems, in particular, can reinforce each other, potentially pushing the economy over the precipice.

The first problem arises when specific factors, real or perceived, block some options from the adjustment menu. Some measures may already have been exhausted: the country may not have any wealth or reserves left to tap, and there may be a shortage of willing lenders. Other measures, such as fiscal adjustment, must be implemented very carefully, in order to avoid torpedoing the growth objective.

The second problem is timing, with governments struggling to ensure that the measures take effect in the right sequence. Effective implementation requires understanding key features of economic and financial interactions, including not just feedback effects, but also the behavioral aspects of private-sector responses. And all of this must be closely coordinated with the pursuit of supply-side reforms that promote robust, durable, and inclusive growth.

Here is where the Macri government’s approach is an historical exception. Macri took over the presidency with a bang, launching an audacious – and highly risky – strategy that places aggressive price liberalization and the removal of quantitative controls front and center, ahead of the five measures relating to demand management and financial assistance. Already, most export taxes and currency controls have been scrapped, income taxes have been cut, and the exchange rate has been freed up, allowing for an immediate 30% depreciation of the peso.

Historically, few governments have pursued this type of sequencing, much less with such fervor; indeed, most governments have hesitated, especially when it comes to full currency liberalization. When governments have taken similar steps, they usually have done so after – or at least alongside – the provision of financial injections and efforts to restrain demand.

The reason is clear: by taking time to set the stage for liberalization, governments hoped to limit the initial spike in price inflation, thereby avoiding a wage-price spiral and curbing capital flight. They worried that, if these problems emerged, they would derail reform measures and erode the public support needed to press on.

To revive the Argentine economy in a durable and inclusive manner, Macri’s government needs to act fast to mobilize sizeable external financial assistance, generate additional domestic resources, and implement deeper structural reforms. If it does, Argentina’s bold economic strategy will become a model for other countries, both now and in the future. But if the approach falters – whether because of incorrect sequencing or a surge of popular dissatisfaction – other countries will become even more hesitant to lift controls and fully liberalize their currencies. The resulting policy confusion would be bad for everyone.

Author: Mohamed A. El-Erian is theChief Economic Adviser at Allianz and a member of its International Executive Committee.

More on Argentina View all

Argentina has become first country in South America to rollout identification cards for non-binary citizens, who don't wish to identify as male or female‍.

Lessons on urban agriculture and crisis management from Argentina

COVID-19: Why restructuring Argentina’s debt is so significant