Do humans cause more environmental damage than a nuclear disaster?

Nearly 30 years have passed since the nuclear accident at Chernobyl, and the scientific community is still arguing about the impact radiation is having on the ecosystem surrounding the reactor. Recently, together with other scientists, I studied the animals in the human exclusion zone around the plant.

The results were shocking: whatever the impact of radiation on animals may be, the effects of human habitation seem to have been a lot worse. The site offers a stark reminder that humans’ simple, physical presence in a habitat is more damaging than one of the twentieth century’s worst environmental catastrophes. 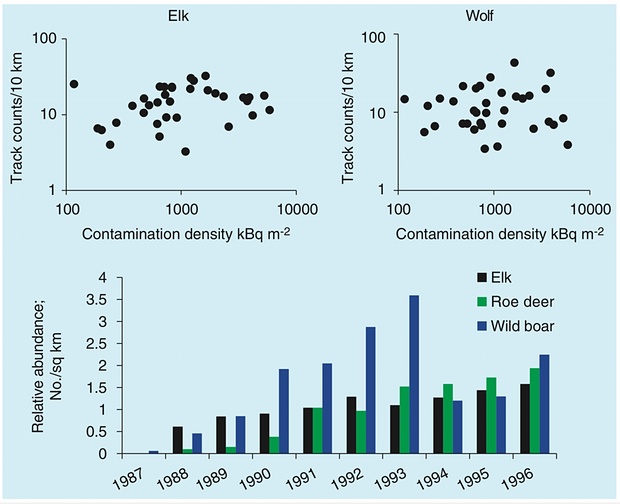 We studied animals in the nearly 2,200-square-kilometer (850 square miles) sector of the exclusion zone in Belarus called the “Polessye State Radioecological Reserve.” Before the disaster, this area was home to 22,000 people in 92 villages, and the land was farmed and exploited for its forest resources. In the days after the accident, the area’s human residents were evacuated with their farm animals to protect them from high levels of radiation.

Even though radiation levels dropped by a factor of nearly 100 in the months after the accident, the area is still judged unfit for human habitation. There are few reports on the effects of the accident on wild animals, but we know that in some radiation hot spots trees and wildlife died.

Some might expect that, nearly 30 years later, the area around the reactor remains a wasteland, sparsely populated by genetically damaged animals exposed to chronic radiation across multiple generations. The reality is very different. Indeed, as early as a few years after the accident, data collected by Belarusan scientists flying helicopter surveys over the abandoned area showed rising numbers of wild boar, elk, and roe deer.

And, with the passage of time, the region’s wildlife population continued to grow, as animals made use of what people had left behind. Crops, gardens, and orchards provided abundant food supplies. Abandoned houses and farm buildings offered ready-made nests and dens. By 1993, the number of wild boar had increased sixfold, before halving due to a disease outbreak and predation from the rapidly growing wolf population.

Our research shows that the number of large mammals at Chernobyl is similar to that in uncontaminated nature reserves in Belarus – except for wolves, which are far more numerous in the area around the reactor. The area is also home to lynx and even a few brown bears. Nor do the population data show any link between radiation levels and mammal densities; the number of mammals in the most contaminated parts of the zone is similar to that in the least contaminated parts.

To be sure, the fact that animals are thriving at Chernobyl does not mean that radiation is good for wildlife. Radiation does cause DNA damage, and at current levels we cannot rule out some effects on the reproduction of individual animals.

But a comparison with what happened outside the affected area is instructive. Whatever damage radiation has wrought, human habitation has caused far greater destruction. Indeed, in areas outside the zone or nature reserves, populations of elk and wild boar underwent steep declines, as major socioeconomic changes after the fall of the Soviet Union worsened rural poverty and crippled wildlife management.

The lesson from Chernobyl is that if nature is to thrive, it must be given space – from us. The primary causes behind declining global biodiversity include habitat loss and fragmentation as a result of human activity.

Even some of our most well-meaning environmental efforts, such as the fight against climate change, have led to the expansion of the human presence into previously untouched wilderness. Demand for biofuels, for example, has been linked to deforestation. It may also be time we consider embracing high-tech – even genetically modified – agriculture to provide the food we need on smaller areas of land, leaving more space for wildlife.

There are no easy solutions, of course, and all efforts to address the problem will be complicated by continuing rapid growth of the world’s human population. But one thing is clear: we, as a species, need to think more carefully about our impact on the nonhuman animal population and begin to take better account of these effects in our economic and environmental policies.

Author: Jim T. Smith is Professor at the School of Earth and Environmental Science at the University of Portsmouth.

Image: A geiger counter is placed in front of sunflowers in full bloom in Fukushima, northern Japan. REUTERS/Yuriko Nakao.