Recently, at a child’s birthday party, I overheard a conversation between parents discussing their concern about “screen time.”

Phones, computers, iPads and the good old television are all around us. And this can be a source of anxiety for parents, caregivers and teachers. A recent report from the American Academy of Pediatrics suggests the amount of time young children spend viewing television and movies and playing on handheld devices is increasing.

As an early childhood media researcher, an early childhood teacher educator and a parent, I understand these concerns. But, I believe, it is equally important that we consider how children are learning from the time spent in front of the screen.

My research shows that children are creating complex oral stories through the characters they see on screen. 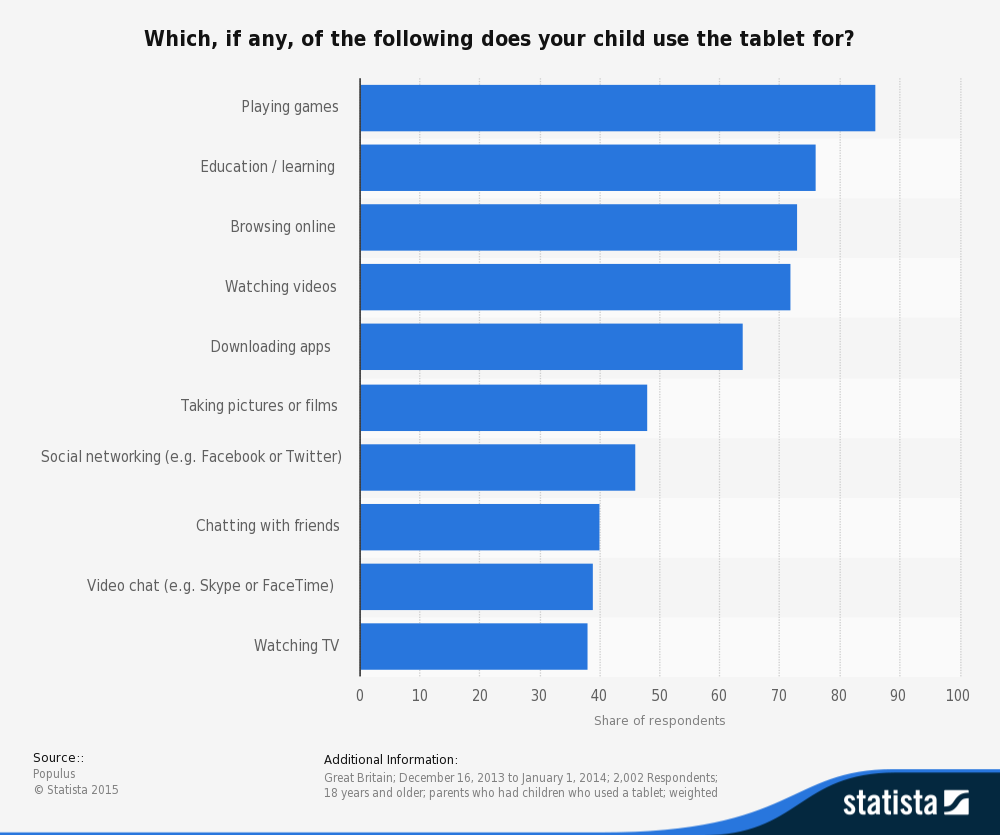 A number of studies show how viewing television and other media can contribute to children’s learning. Children have been known to improve their math and literacy skills from watching “educational” shows such as Sesame Street.

When children watch educational programs and interact with apps that promote learning, they make gains in literacy, numeracy and vocabulary. A recent article in Young Children, a publication of the National Association for the Education of Young Children (NAEYC) (a nonprofit organization that works to promote early learning), shows how children can gain several skills through experience with computers and handheld devices.

These devices can facilitate better language and literacy outcomes, such as letter recognition, listening, comprehension and vocabulary. When children play games that link letter sounds to written letters, it can increase their ability to hear and identify individual sounds – skills children need in order to read.

Apps that allow a “read-along” experience, for example, can help children develop a better understanding of concepts about stories and print, especially if they have printed text that children can see. E-books that highlight words as they are read, help young children learn that print is read from left to right in English.

Children learn from superheroes as well

But it is important to realize that it is not just “educational” television and media from which children learn. Children pick up ideas from television (even television not considered “educational”) and use them to enhance literacy.

Children can learn from superheroes, too. Researcher on early childhood learning Anne Haas Dyson found that seven- to nine-year-old children] took the superheroes they watched on cartoons and brought them into their fiction writing and dramatic play.

Her research shows children, like adults, often use media and media characters as tools. With the help of their teacher, children brought their home life and interests into school to make their writing come to life.

Dyson’s research demonstrates that when allowed, children use media – songs, characters from their favorite shows and movies – as a way to enhance their “school learning.”

My own research demonstrates how preschool children take unlikely characters in popular television shows and movies and blend them together to create complex oral stories.

For example, one preschooler, I observed, “borrowed” Disney Channel’s Hannah Montana, a tween rockstar, as the protagonist in her tale. After introducing Hannah Montana, she brought Boots (the monkey from Dora the Explorer, a preschool cartoon) into her story. She spun a story in which Hannah Montana and Boots battled and ultimately defeated a villainous monster from a movie.

Preschoolers took ideas from shows such as Sesame Street, Mickey mouse Clubhouse, cartoons featuring Spiderman, Tinkerbell and Spongebob. Some combined these with shows that older siblings and family members watched such as action movies, professional wrestling and even monster movies.

Rather than repeating what they saw on television, they brought ideas from their own community to make new stories.

The stories children saw and the characters they knew from television also allowed them to relate to other children. Superheroes, characters from Frozen and other popular culture characters can give children from diverse backgrounds a common (and exciting) topic in which to create play scenarios.

And this play involves negotiating and talking with other children about characters and plot, which in turn enhances oral language. Oral language is a crucial aspect of literacy for young children.

How should adults monitor screen-time?

Although research shows the way in which children learn from media, there are also legitimate concerns about what children see on these screens.

Media is created from viewpoints and stances that may not always be acceptable to parents and teachers. Media can show people in inaccurate and stereotypical lights.

So what should adults do with all of the media content coming into their children’s lives?

Research with preschoolers has shown that conversations allow a child to examine who is being shown in media and the way they are being shown. And it is important to note that children’s view of these stereotypes often depends on their home lives and environments. These conversations are important for children.

Adults also need to recognize that screen time is one way for children to learn. It is certainly not the only way. The American Academy of Pediatrics suggests that children should engage with entertainment media for no more than one or two hours per day.

As they note, it is important for kids to spend time on outdoor play, reading, hobbies and using their imaginations in free play. Children need rich experiences in their lives and interactions with other people. Screens cannot make up for this.

Children need a healthy balance. While we should be careful in flinging open the gates of media, we should be equally concerned about chaining them shut.

Author: Allison S Henward is an Assistant Professor of Early Childhood Education at the University of Hawaii.

The tech industry is disruptive by nature – businesses must evolve to survive.   So what's enabled some companies to weather digital disruption and thrive?

NFTs and the environmental cost of owning digital art