How will China tackle its debt dilemma?

This month’s monetary-policy statement from the People’s Bank of China (PBOC) contained a striking statement: “If endogenous momentum is inadequate and returns on investment low, growth must rely on debt to a great extent.” Those words highlight the twin challenges – real and financial – that the Chinese economy now confronts.

On the real side, China needs to achieve a transition away from unsustainable investment-led growth. Even before the 2008 crisis, China’s investment rate of 41% of GDP was extraordinarily high. But by 2010-2011, it had soared to 47%, as the authorities unleashed a real estate- and infrastructure-construction boom aimed at offsetting the threat to exports and employment arising from advanced-country deleveraging.

The plan worked, with employment in construction industries rising from 28 million in 2007 to 45 million in 2013. But much wasteful investment has inevitably followed: massive apartment blocks in second- and third-tier cities that will never be occupied, and heavy industrial sectors, such as steel and cement, that suffer from chronic overcapacity. From 2007 to 2013, as average returns on investment fell, China’s incremental capital-to-output ratio – the units of investment needed to achieve each additional unit of GDP – doubled to six.

As China shifts to a more sustainable consumption-led growth model, it needs better investment – and less of it. Limited progress has already been made on this front: investment as a percentage of GDP has fallen slightly to 46% in 2014, while growth in retail sales and consumption have outpaced GDP growth. But with household consumption still below 40% of national income, China has a long way to go. 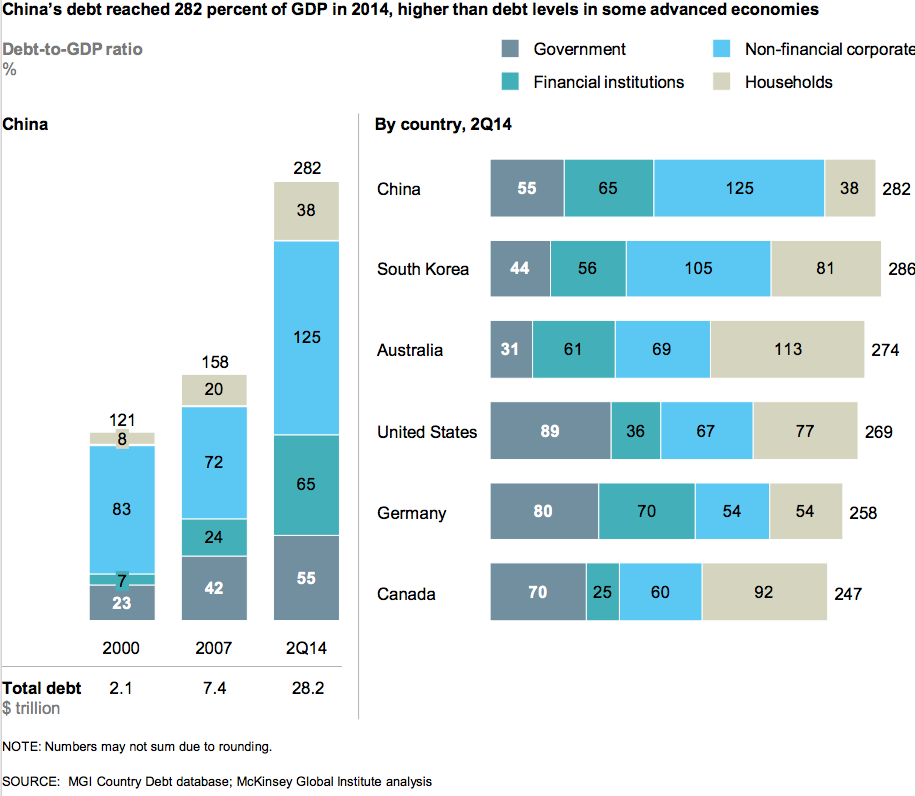 Moreover, there is a limit to how fast any economy can shift real resources – and especially labor – among sectors. Redeploying construction workers, for example, to service-sector jobs will be a slow, difficult process.

Financial services now account for around 8% of Chinese GDP – a figure normally seen only in global financial centers, such as the United Kingdom and the United States. This reflects leverage far in excess of emerging-economy norms, with China’s debt-to-GDP ratio up from around 130% in 2008 to over 220% today.

Much of that leverage is held by local governments and companies that used it to fund investment projects – projects that are now, in many cases, earning low or negative returns. With operating cash flows inadequate to repay much of China’s debt, borrowers have little choice but to finance payments with new credit.

Chinese policymakers now face a dilemma. Constraining new credit would fuel a surge in defaults on bank loans and wealth-management products, and would cause investment to contract much more rapidly than consumption can feasibly grow. But allowing the credit boom to continue will create even bigger problems in the future.

For now, China’s leaders seem to be going with the “more credit” option, as the November PBOC statement confirmed. Bank lending has accelerated over recent months. Total debt is still growing at a faster pace than nominal GDP. And if current trends hold, the debt burden could amount to well over 300% of GDP by 2020.

Until recently, a sanguine attitude toward this debt buildup was still possible. Most of the debts, it could be argued, are between different Chinese state entities – for example, owed by local-government financing vehicles or state-owned enterprises to state-owned banks. The Chinese authorities could therefore deal with emerging solvency problems, as they did in the late 1990s and early 2000s, with some combination of write-offs, bank recapitalization, transfers of liabilities to the central government balance sheet, and debt monetization.

And, indeed, China has lately been employing just such an approach. Off-balance-sheet local-government debts are being transformed into state-guaranteed bonds, and the PBOC is lending money directly to commercial banks against the security of those bonds.

But the larger the stock of debt already accumulated, the less convincing an optimistic story becomes. As the scale of bad loans becomes apparent, China’s official government debt – still a relatively low 41% of GDP in 2014 – could swell significantly. And financial stability could be threatened not only by the quality of bank assets, but also by the sheer scale of bank liabilities.

If China’s traditional and shadow banking systems end up holding loans amounting to more than 300% of GDP, then somewhere there will be companies, households, and government entities with bank deposits or other fixed-income assets equal to over 270% of GDP (with the other 30% or so being investments in bank equity). Those apparently low-risk claims cannot really be worth 270% of Chinese GDP if a significant proportion are matched by loans to borrowers who cannot repay. One way or another, the real value of those claims will have to be reduced.

In a closed economy with capital controls, that could be achieved through many years of financial repression, with interest rates on bank liabilities kept lower than the rate of inflation. That is essentially how the UK reduced its public-debt stock from around 250% of GDP in 1945 to below 50% by 1975.

But financial repression becomes less feasible the more China liberalizes its capital account, because investors can simply move their assets abroad. If a significant proportion of investors do so, the capital outflows will dwarf even China’s massive foreign-exchange reserves, which amount to around 30-35% of GDP. And if capital-account liberalization results in large foreign claims against China’s financial system, Chinese asset-price and exchange-rate instability will have a far greater global impact than it does today.

The entire world has a strong interest in China’s successful management of the twin challenges its economy faces. But the PBOC’s recent statement illustrates just how difficult that will be.

Author: Adair Turner is Chairman of the Institute for New Economic Thinking.

Image: A Chinese national flag flutters at the headquarters of a commercial bank on a financial street. REUTERS/Kim Kyung-Hoon.