How your early childhood shapes your brain

This post first appeared on The World Bank’s Voices Blog.​

Did you know that investments in early childhood are crucial for achieving the brain’s full developmental potential and resilience?

Jim Heckman, Nobel Laureate in economics, and his collaborators have shown that strong foundational skills built in early childhood are crucial for socio-economic success. These foundational skills lead to a self-reinforcing motivation to learn so that “skills beget skills”. This leads to better-paying jobs, healthier lifestyle choices, greater social participation, and more productive societies. Growing research also reveals that these benefits are linked to the important role that early foundations of cognitive and socio-emotional abilities play on healthy brain development across the human lifespan.

Brain complexity –the diversity and complexity of neural pathways and networks— is moulded during childhood and has a lasting impact on the development of cognitive and socio-emotional human abilities. 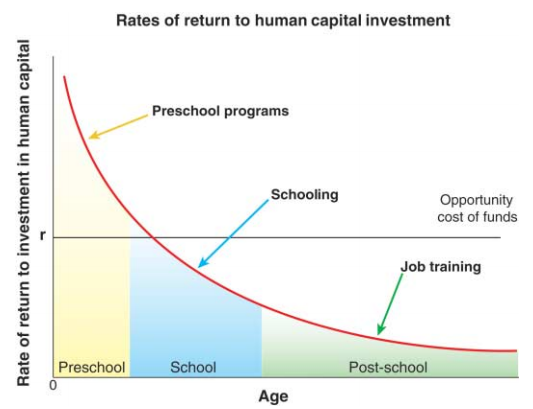 for investments that will lead to health and productivity. The quality of nurturing environments, in particular, preschool experiences and the interactions with adults and peers during childhood, shapes cognitive and socio-emotional skills.

Fluid abilities tend to correlate with each other (i.e. individuals who perform well in one domain have a tendency to perform well in other domains) and intertwine to form a person’s general cognitive ability or intelligence. While there are substantial individual differences in cognitive functioning across the life-span, on average, knowledge-based abilities remain relatively stable into late-life. In addition, fluid abilities start to decline in mid-life and more so during advanced aging.

We are more likely to develop pathologies (diseases) with aging

Aging erodes structural and functional brain integrity.  One such cognitive disorder of the aging brain is dementia, the incidence of which increases exponentially with age. It is the leading cause of loss of independent functioning and requirement for institutional care in old age.

Alzheimer’s disease is the most common cause of dementia. The number of people living with dementia worldwide is currently estimated at 47 million

–nearly 60% of cases occur in low- and middle-income countries — and is expected to triple by 2050 with increasing life expectancies around the globe. Some of the main challenges associated with dementia are the economic impact on families, caregivers, and communities, associated stigma, and social exclusion.

An adequate early childhood environment and strong foundational cognitive abilities protect against the risks of the aging brain. A healthy and active brain, shaped by adequate nutrition and safe and enriching environments in early-life, enables the retention of brain functions across a lifespan.

Optimal brain development provides an individual with a greater number of neurons, more synapses (neural connections), and multiple pathways to perform any given task. Such “neuronal redundancy” comes in handy when a person is faced with deleterious brain aging.

More importantly, an increasing number of studies suggest that early childhood interventions targeting mental domains might increase maximum life-time cognition, potentially reduce the trajectory of cognitive decline in late-life, and even postpone the point at which cognitive deficits first appear.

Evidence from this research is inspiring innovations to make brain development a central element in early childhood programs in developing countries. In Colombia, a World Bank pilot program showed caregivers how to stimulate young children using play and talk. A rigorous evaluation shows that it improved their ability to understand and process what they hear or read. A follow up study is being planned to see if the gains have been sustained over the medium term.

In Kenya, researchers are studying whether giving storybooks to poor households helps improve children’s readiness to succeed by stimulating visual and cognitive brain development. In Bangladesh, another study examines whether getting parents to play and sing to their young children helps their brain development by building positive bonds with them.

Studies and increasingly interventions across several disciplines – neuroscience, health, education, economics, and psychology- provide evidence that early and sustained investments in human development are key for our neurons, our brains, for us as individuals, and for our societies. They lay the foundations for our capacity to achieve and to function well despite social or even biological obstacles throughout one’s life course.

Is there a link between the early foundations of brain development and the capacity to recover from adversity? What is the role of socio-emotional development? Advances in the brain sciences show that, indeed, individuals with a good head start in brain development are more resilient to potential mid-life adversities and the aging process.

In our next blog, we will look into new evidence from the fields of neuroscience and psychology. We will write about ‘resilient brain aging’ and the catalytic role of an adequate early-life environment for developing full brain potential.  Please check back next week to find out more about the link between socio-emotional abilities and the resilient brain.

Author: Dorota Chapko is a PhD candidate in Public Health at the University of Aberdeen. Omar Arias is acting sector manager and lead economist in the Human Development Economics Unit for the World Bank Europe and Central Asia region.