These are the fastest growing cities for international visitors

Colombo in Sri Lanka was the fastest growing city for international visitors over the past six years, according to a MasterCard report.

The report assesses the percentage change in the number of overnight visitors between 2009 and 2015 for destinations with more than 1 million international arrivals in 2015. 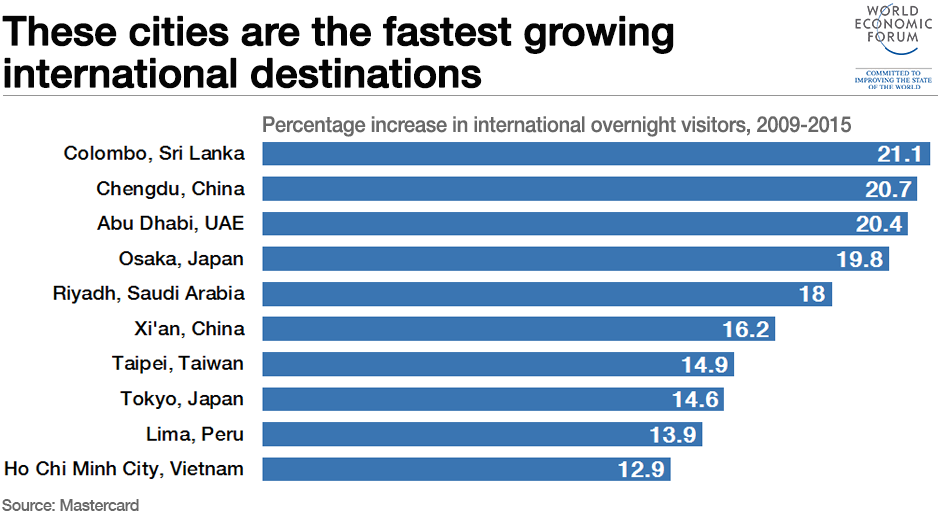 Colombo saw a 21.1% increase in visitors over the time period, and is followed in second place by Chengdu, China. The capital of Sichuan province also saw growth in excess of 20%. The top three is completed by Abu Dhabi, the capital of the UAE, which saw growth of 20.4%.

The list includes cities from around the world in both developed and developing economies – with the exception of Europe and North America.

Some cities started with low numbers of visitors in 2009 and are now seeing big increases – for example, Colombo, following the end of the Sri Lankan civil war. Meanwhile, leading destinations such as Tokyo are experiencing continued strong growth.

The chart highlights the spread of global tourism and trade, as well as the increasingly interconnected global economy, as visitors travel to more and more destinations.

Have you read?
Which countries prioritize travel and tourism most?
The top 10 most tourism-ready economies
How emerging market growth is changing tourism

Factors such as slum proliferation, haphazard development, and traffic congestion are causing urbanization in Africa to be considered unsustainable.