The world has reached an historic agreement on climate change. The deal concluded at the United Nations Climate Change Conference in Paris commits countries to take steps to limit warming to “well below” 2º Celsius relative to pre-industrial levels and to pursue “efforts” to limit warming to 1.5ºC. It also obliges developed countries to provide $100 billion per year in assistance to developing countries. But, unfortunately, the final negotiations dropped the one number that truly matters for the future of our planet: zero. 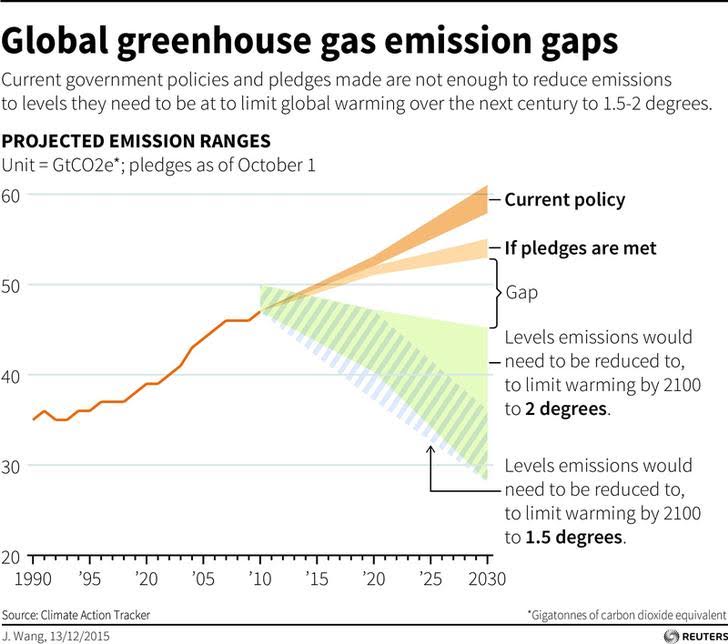 That is the net amount of carbon dioxide we can emit if we are ever to stabilize the planet’s temperature at any level. Zero, none, nada. The Earth’s atmosphere-ocean system is like a bathtub filling up with CO2 and other greenhouse gases: The higher the level, the warmer the planet will be.

The emissions tap must be turned off once the bathtub reaches a level associated with a certain level of warming – say, 2ºC, above which, scientists nearly unanimously agree, the risks become severe, tipping points become possible, and civilization’s ability to adapt is not guaranteed. Otherwise, the atmospheric bathtub will keep being filled, warming the planet 3º, 4º, 5º, and so on, until emissions eventually stop – or we go extinct. The sooner we turn off the tap, the lower the temperature at which the climate stabilizes, the less risk we will face, and the lower the cost we will incur in adapting to a warmer planet.

Only about half the CO2 we dump into the atmosphere stays there – the rest is quickly redistributed into the oceans and biosphere. But, as the oceans become increasingly saturated and able to absorb less, the amount that is redistributed is declining. Likewise, warming temperatures cause soils to release more CO2, causing yet more warming.

The only way to get CO2 out of the bathtub once it’s there is, almost literally, to bail it out. There are natural processes that “re-fossilize” CO2, but they are far too slow to matter.

Carbon capture and storage (CCS) technology takes CO2 out of emissions from coal- and gas-powered generating plants and sequesters it underground. While this does not do anything about the existing CO2 in the bathtub, CCS is technically capable of reducing emissions from coal and gas close to zero. But it remains very expensive, and efforts to develop the technology at scale have moved slowly.

From large-scale CCS, it is only a small step to take existing CO2 from the air and sequester it. But “CO2 disposal” technologies are still at a relatively early stage of development. If we continue on our current path, the scale on which they would have to operate would be formidable.

So we are in a race. Can we turn the tap to zero net emissions before the tub hits a level that takes us above the 2ºC threshold set in Paris? In fact, even that level may not be low enough. As the Paris agreement recognizes, many scientists believe that warming above 1.5ºC is risky and that adaptation to it will be extremely expensive, particularly for developing countries and island states.

The good news is that if we somehow stopped all emissions today, temperatures would continue to rise only for a decade or so, before stabilizing. But with the emissions tap still on high, we are rapidly running out of room in the tub. We can emit less than half of our historical CO2 emissions to date before we probably exceed the 2ºC threshold. On our current course, we will reach that point by 2040-2050.

This is why most scientists and a growing number of business leaders and investors are calling for a clear goal that emissions must go to net-zero before warming reaches 2ºC. In May 2015, the International Chamber of Commerce and CEOs from around the world called for a zero emissions goal. In Paris, leading investors and Bank of England Governor Mark Carney, along with Bloomberg CEO Michael Bloomberg, also endorsed net-zero emissions, citing systemic risks to the financial system from climate change. It is a goal that sends an unambiguous signal that CO2-emitting industries will either have to change or die, and that the future lies with zero-emissions technologies and businesses.

While the net-zero objective was dropped by the negotiators in Paris, it should be endorsed by individual countries in their plans, reinforced by the G-20, and eventually enshrined in the UN agreement. For the planet, it is zero or bust.

Authors: Eric Beinhocker is Executive Director of the Institute for New Economic Thinking at the Oxford Martin School, University of Oxford. Myles Allen is Professor of Geosystem Science and Leader of the Climate Research Program at the School of Geography and Environment, University of Oxford.

Image: Splinters of ice peel off from one of the sides of the Perito Moreno glacier in a process of a unexpected rupture during the southern hemisphere’s winter months. REUTERS/Andres Forza