Why Chan and Zuckerberg are modern altruists

When Facebook’s founder, Mark Zuckerberg, and his wife, Priscilla Chan, recently announced their plan to devote some $45 billion in Facebook shares toward making the world a better place, some critics wrote off the move as a public-relations ploy. They noted that Chan and Zuckerberg were not putting their shares in a charitable foundation, but rather into an investment company that can allocate funds however it chooses – and that it can choose for-profit investments.

Skeptics also noted that instead of making an irrevocable legal commitment, the couple had only pledged to donate “most of their wealth” to the fund. According to one mean-spirited critic, Zuckerberg was simply moving his “money from one pocket to the other” with a substantial “PR return-on-investment [that] dwarfs that of his Facebook stock.

The truth is quite different. The strategy adopted by Chan and Zuckerberg, a combination of traditional philanthropy and impact investing, is exactly in sync with the most promising trends in modern altruism.

The defining strength of traditional philanthropy is its ability to take risks. Philanthropies don’t have to answer to public officials or generate returns for private shareholders. That allows them to finance bold, innovative ideas. And, in contrast to both the public and for-profit sectors, they can adopt a very long time horizon for problems that require decades to solve.

In many ways, traditional philanthropies operate like venture capitalists. They might know that many of their projects will not pay off, but they are betting that a few will turn out to be pioneering breakthroughs, and that their success will spark policy changes or attract larger flows of public and for-profit private funding. 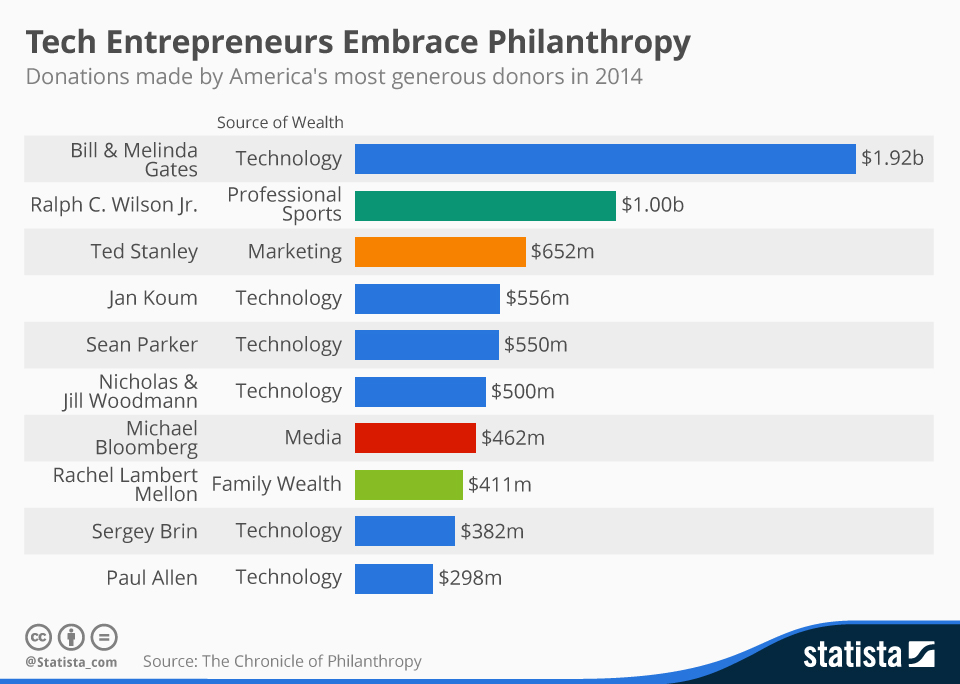 But philanthropy is only one way to address social and environmental challenges. Impact investing – a term coined in 2007 at a conference sponsored by the Rockefeller Foundation, one of the oldest traditional philanthropies – is another. Unlike philanthropic donors, impact investors seek both social and financial returns on their investments. Impact investing not only broadens the pool of available wealth; it fosters projects that will produce self-sustaining returns.

In recent years, the money flowing into impact investing has expanded rapidly, and the range of assets available to impact investors has grown to match. Social venture capital firms, which seek a “double bottom line” (healthy financial returns, as well as broader social or environmental benefits) are one of the fastest-growing segments of the venture-capital industry.

In Northern California, for example, the Bay Area Equity Fund has invested $100 million since 2004 in companies such as Revolution Foods, Pandora, SolarCity, and Tesla. All told, the fund estimates that those investments have created 15,000 jobs and generated an internal rate of return of 24.4%.

Big institutional players, meanwhile, are becoming significant impact investors by pouring money into Environmental, Social, and Governance (ESG) mutual funds. By one estimate, investment in ESG funds has exploded, from $202 billion in 2007 to $4.3 trillion in 2014. A growing number of ESG funds are now directly available to retail investors.

Even giant pension funds are eager to enter the arena, and the US Department of Labor recently made that easier. In October, Secretary of Labor Tom Perez revised existing rules to allow pension fund managers to consider the social impact of investments as long as doing so does not compromise the managers’ fiduciary obligations. A similar 1978 ruling, allowing pension funds to allocate some of their investments to non-traditional assets, helped fuel the growth of the venture capital industry.

Purely philanthropic foundations face major constraints. They are, in theory, allowed to act as impact investors to make “program-related investments” in projects consistent with their stated missions; in practice, however, they face strict fiduciary rules that make them reluctant to do so. A growing number of foundations – such as the Bill & Melinda Gates Foundation, the Rockefeller Foundation, and the Kresge Foundation – are increasing their investment in activities that further their philanthropic goals. Unfortunately, program-related investments still represent only 1% of the capital deployed by foundations, with just 0.05% of that going toward equity investments.

The Chan-Zuckerberg initiative is a high-profile example of the rapid growth of social-impact finance that complements and supports traditional philanthropy. Chan and Zuckerberg will receive no tax benefit from transferring their wealth to a limited liability corporation. But when they donate Facebook shares to a charitable organization, the recipient won’t have to pay capital gains tax when it liquidates the shares and puts the money to work. And Chan and Zuckerberg will get a charitable deduction for the value of the shares at the time they are donated.

Meanwhile, they will be free to use part of their fortune as impact investors in for-profit social enterprises that promise both financial and social returns (and they will have to pay taxes on the profits they reap). They can also choose to invest in advocacy and even political activity to encourage change. This is exactly the approach that many of this generation’s major tech-based philanthropists, from Pierre Omidyar to Laurene Powell Jobs, are using.

None of this is to say that the government should relinquish its own role in addressing major public challenges. For all their money, not even billionaire philanthropists like Zuckerberg and Gates can implement solutions on a regional, national, or global scale. But they can assume the upfront risks of developing and testing new approaches to tackling long-term social and environmental problems. And then they can advocate for policy changes and public funding to scale those approaches that work.

In short, there is nothing wrong with public-spirited innovation capital. On the contrary, its soaring popularity suggests that it will be a crucial component of twenty-first-century problem-solving.

Author: Laura Tyson, a former chair of the US President’s Council of Economic Advisers, is a professor at the Haas School of Business at the University of California, Berkeley, a senior adviser at the Rock Creek Group, and a member of the World Economic Forum Global Agenda Council on Gender Parity. Lenny Mendonca, Senior Fellow at the Presidio Institute, is a former director of McKinsey & Company.

Drawn from around the globe and with a shared purpose to ensure a sustainable recovery from COVID-19, here are the 2020 Social Innovators of the Year.

Local networks and support can help Black-owned businesses grow beyond the systemic blockages in their way. Here's how to start building these ecosystems.

How to build refugee self-reliance during COVID-19

How to close the gender gap in venture capital