Why climate finance is a no-brainer for business

Record-strength hurricanes, submerged coastal cities, scorched dust bowls – these are the sort of apocalyptic images that are often used to illustrate the devastating consequences of climate change. But for millions of farmers in Latin America and the Caribbean, a slow-motion catastrophe is already underway.

A fungus known as rust, or roya in Spanish, is attacking coffee plantations from Mexico to Peru. Scientists blame the rapid spread of the disease – which suffocates trees by coating their leaves – on climate change. Rust thrives when it rains often and temperatures are unusually warm – conditions that are occurring more frequently in these coffee-growing regions.

Most of the discussion at the United Nations Climate Change Conference in Paris has focused on what will happen after 2020, when any agreement that is reached would come into effect. But coffee rust is destroying livelihoods even as the negotiators speak. The crisis illustrates the burden developing countries face as they try to meet their people’s hopes for higher living standards and their international commitments to decarbonize their economies. Addressing it will require the same broad cooperation and decisive action that other climate-related challenges will demand over the coming decades.

In Central America, per capita greenhouse-gas emissions are between one-fifth and one-tenth of those in industrialized countries. Governments in the region are pledging to cut emissions by as much as 25% by 2030, and to implement other measures to mitigate and adapt to climate change; overall, these efforts are expected to require at least $4 billion a year in investments. By comparison, replacing blighted coffee trees with rust-resistant varieties would cost an estimated $1 billion.

In order to help Central American farmers tackle this challenge, the Inter-American Development Bank (IDB) has partnered with two global coffee companies – Starbucks and ECOM – as well as other multilateral agencies and donors to devise a pragmatic, business-based solution. Our $100 million program is designed to provide an example of how financing to combat the effects of climate change can be delivered to those who need it the most.

The IDB program offers long-term loans for replacement of coffee trees to small-scale farmers who traditionally have little or no access to financing of any kind. Equally important, the program provides farmers with the training needed to confront increasingly frequent outbreaks of crop diseases. Farmers who tend their new trees well can triple their coffee output in three years. And if these loans can be shown to be good investments, more banks might be persuaded to finance climate-related agricultural projects.

But there is a major obstacle to greater participation in climate finance among capital-market players: demand can be extremely dispersed. 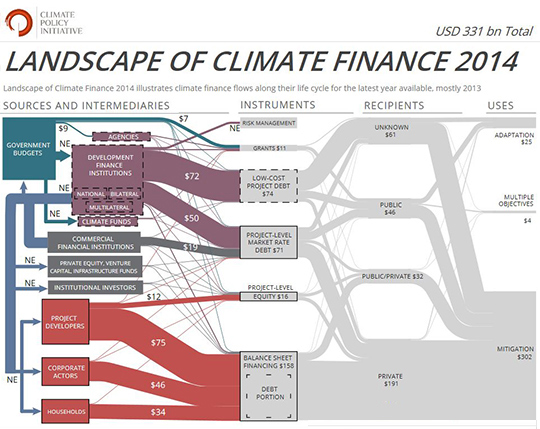 Boosting energy efficiency may be one of the most cost-effective ways to reduce greenhouse-gas emissions; but in Latin America, improvements in this area would entail persuading tens of millions of small businesses to switch to more environmentally friendly refrigerators, power tools, or delivery trucks.

Here, too, creative solutions can be found. Using the asset-backed security model, we recently joined with the UN’s Green Climate Fund and China to structure a $450 million “green bond” facility. This will allow pension funds and insurance companies to finance indirectly the necessary equipment upgrades in mom-and-pop stores and workshops from Tijuana to Tierra del Fuego.

There are many other areas where those committed to fighting climate change can follow our example. Traffic-clogged cities need better public transportation, and financing the expansion of bus rapid transit (BRT) systems is a proven way to reduce congestion, emissions, and commuting costs. Likewise, the turbines in many hydro power plants in Latin America are coming to the end of their useful life. By retrofitting them with new turbines (as we are doing in Haiti and Venezuela), countries can continue to use this source of renewable electricity for an additional 20 to 30 years.

Ultimately, persuading the private sector that climate finance can be good business will be the key to unlocking capital on the scale required to decarbonize our economies and make them more resilient to harsher weather conditions. But to do that, we have to prove that climate-smart investments can be good not just for people and the planet – but also for profits.

Author: Luis Alberto Moreno is President of the Inter-American Development Bank, and a member of the World Economic Forum’s Foundation Board.

Luis Alberto Moreno, Member of the Board of Trustees, World Economic Forum

Explainer: What is the green bond market and why is it growing so fast?

The market for green bonds is growing exponentially. They must have a positive environmental impact and support the world's sustainability projects.

Cities are under siege from climate change. They need to adapt faster

Extreme weather events are becoming much more of a threat to urban areas, leaving 56% of the world's population vulnerable, and still steadily increasing.

Why we can't stop the climate crisis without de-carbonizing cities

What are atmospheric river storms? And how is climate change affecting them?