Another key European project is under threat. Some two decades after border controls were first abolished under the Schengen Agreement – which now includes 26 countries, including four non-members of the European Union – Germany has reinstated controls at its border with Austria, and France at its border with Belgium. The controls are meant to be temporary, and the vast majority of other borders remain open. But more openness does not seem to be the direction in which Europe is headed – and that is a serious problem. 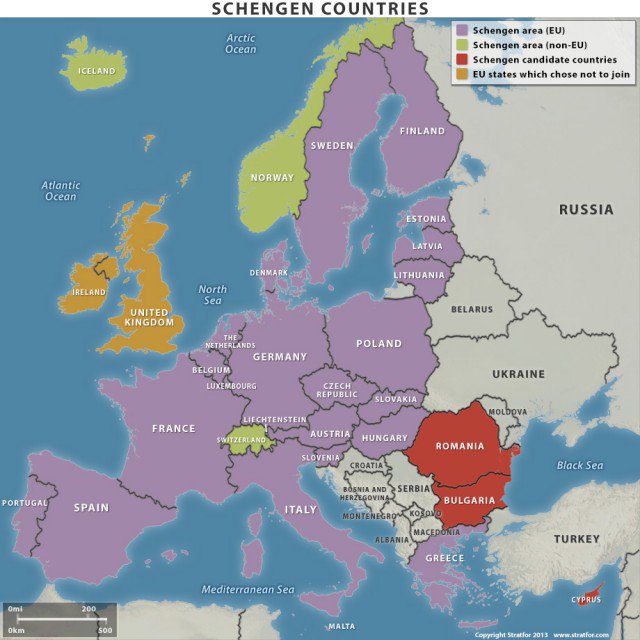 The shift away from a “Europe without borders,” instigated by images of refugees walking across internal frontiers, was fortified by the news that most of those who carried out last month’s Paris attacks came from Belgium, and that some may have entered the EU via the Balkans, posing as refugees. The underlying assumption – reinforced by many European politicians, especially interior ministers – is that there is a tradeoff between security and openness. This is far from accurate.

In fact, the reinstatement of border controls seems to be an example of “security theater” – a policy intended to make the public feel like something is being done. But, far from making Europeans safer, rolling back Schengen would actually hinder the fight against terrorism, because countries would be forced to devote valuable resources – thousands of police officers, if the agreement were to be abolished altogether – to checking documents at borders. Those resources would no longer contribute directly to investigations into terrorist activities.

And those investigations need all the help they can get. After all, the objective – to identify a few terrorists hiding among millions of law-abiding citizens, before they commit a violent act – is the equivalent of finding a needle in a haystack. The recognition of the flawed logic behind reinstating border controls is probably why police officials have remained guarded in discussing the issue.

It should be remembered that when five countries – Belgium, France, Germany, Luxembourg, and the Netherlands – agreed in 1985 (in the village of Schengen, Luxembourg) to abolish border controls, they did not do so on a whim or because some politicians had a lofty vision. However symbolic the agreement may have been, symbolism wasn’t the point.

Participating countries’ security establishments had recognized that stopping people at the internal borders did not help them counter major threats, such as organized crime and drug smuggling. Truck drivers, who protested against long waits at customs stations, helped spur the effort. But it took another decade of hard-nosed, detailed negotiations, entailing efforts to strengthen the EU’s external borders, to reach the point, in 1995, where internal border controls could actually be lifted.

The subsequent decision by non-EU countries like Switzerland to join the Schengen Area highlights the massive benefits, including for security, of maintaining open borders. Rather than attempt to control the masses of tourists and business travelers entering the country from all sides – essentially an exercise in futility in Switzerland – the country decided to focus police resources specifically on security threats. By joining Schengen, the Swiss police also gained access to the Schengen Information System and other important European databases on criminal suspects, stolen cars, and more.

Of course, there are flaws in the Schengen system. Like the eurozone, the area began with only a small group of member countries, all of which had a similar outlook and capacity to implement common rules, but soon welcomed many others, some of which, it later became apparent, could not uphold agreed standards.

In the eurozone, imbalances in competitiveness and fiscal positions – which were not noted during the perfunctory check, based on formal criteria, that was conducted before approving new members – led to a protracted economic crisis. In the Schengen Area, some countries’ inability to protect external borders adequately – owing to a lack of administrative capacity (especially true in Greece, but also, to some extent, Italy), together with geographic challenges like long and fractured coast lines – have undermined confidence in the face of the refugee crisis.

The eurozone survived its crisis for two key reasons. First, a common institution, the European Central Bank, had the power to act. Second, member states relinquished some control over their banks, in order to boost the system’s overall stability.

If the Schengen Area is to endure, it needs to evolve in a similar direction, establishing a common institution responsible for securing external borders, while reinforcing the framework for internal security. As it stands, defense of Schengen’s external borders is up to individual member states, including one, Greece, that is already facing a devastating economic crisis. The only EU-wide operation aimed at helping police the external border, called Frontex, is severely limited in scope.

What the Schengen Area needs is a true European coast guard, with its own budget, ships, and personnel. The Mediterranean can be expected to remain the main security challenge for some time, owing both to illegal immigration and its proximity to terrorist training grounds. It thus makes sense for the new coast guard, backed by EU funds, to start there. Even a small fraction of the EU budget would far exceed the available resources of any individual country.

Moreover, a European coast guard would provide a flexible tool with which to allocate resources as effectively as possible at any given moment. After all, even if security threats remain concentrated in the same broad area, the most urgent challenges can shift considerably over time. Last year, the problem was Southern Italy. Today, it is the Aegean. Tomorrow it might be somewhere else. Europe needs to prepare for any eventuality.

It is not only possible to have both openness and security; the former can actually bolster the latter. The Schengen Area’s members need to recognize that the security rationale for abolishing internal borders remains as compelling today as it was when they joined.

Author: Daniel Gros is Director of the Brussels-based Center for European Policy Studies.

Image: Armed Forces of Malta marines toss bottles of water to a group of around 180 illegal immigrants as a rescue operation gets underway after their vessel ran into engine trouble, some 30km (19 miles) southwest of Malta. REUTERS/Darrin Zammit Lupi.