Why the best leaders have conviction

Conviction in a leader is an incredibly valuable yet increasingly rare trait. It’s in short supply because our brains are wired to overreact to uncertainty with fear. As uncertainty increases, the brain shifts control over to the limbic system, the place where emotions, such as anxiety and panic, are generated.

This brain quirk worked well eons ago, when cavemen entered an unfamiliar area and didn’t know who or what might be lurking behind the bushes. Overwhelming caution and fear ensured survival, but that’s not the case today. This mechanism, which hasn’t evolved, is a hindrance in the world of business, where uncertainty rules and important decisions must be made every day with minimal information.

We crave certainty. Our brains are so geared up for certainty that our subconscious can monitor and store over two million data points, which the brain uses to predict the future. And that isn’t just a neat little side trick—it’s the primary purpose of the neocortex, which is 76% of the brain’s total mass.

Our brains reward us for certainty. If our nomadic ancestors were anxious about where their next meal was coming from, finding it would result in increased dopamine levels in their brains in addition to a full stomach. You get the same rush from listening to music that has a predictable repeating pattern or from completing a puzzle. Predictable activities satisfy our craving for certainty.

In business, things change so quickly that there’s a great deal of uncertainty about what’s going to happen next month, let alone next year. And uncertainty takes up a lot of people’s mental energy and makes them less effective at their jobs.

The brain perceives uncertainty as a threat, which sparks the release of cortisol, a stress hormone that disrupts memory, depresses the immune system, and increases the risk of high blood pressure and depression. These are things no leader wants her team to endure.

Leaders with conviction create an environment of certainty for everyone. When a leader is absolutely convinced that he’s chosen the best course of action, everyone who follows him unconsciously absorbs this belief and the accompanying emotional state. Mirror neurons are responsible for this involuntary response. They mirror the emotional states of other people—especially those we look to for guidance. This ensures that leaders with conviction put us at ease.

When leaders have conviction, people’s brains can relax, so to speak, letting them concentrate on what needs to be done. When people feel more secure in the future, they’re happier and produce higher quality work.

A leader who can demonstrate conviction will be more successful, and so will everyone she works with. Amplifying your sense of conviction is easier than you think. The following traits of leaders with great conviction will show you the way.

They’re strong (not harsh). Strength is an important quality in a leader with conviction. People will wait to see if a leader is strong before they decide to follow his or her lead. People need courage in their leader. They need someone who can make difficult decisions and watch over the good of the group. They need a leader who will stay the course when things get tough. People are far more likely to show strength themselves when their leader does the same.

A lot of leaders mistake domineering, controlling, and otherwise harsh behavior for strength. They think that taking control and pushing people around will somehow inspire a loyal following. Strength isn’t something you can force on people; it’s something you earn by demonstrating it time and again in the face of adversity. Only then will people trust that they should follow you.

They know when to trust their gut. Our ancestors relied on their intuition—their gut instinct—for survival. Since most of us don’t face life-or-death decisions every day, we have to learn how to use this instinct to our benefit. Often we make the mistake of talking ourselves out of listening to our gut instinct, or we go too far in the other direction and impulsively dive into a situation, mistaking our assumptions for instincts. Leaders with conviction recognize and embrace the power of their gut instincts, and they rely on some tried-and-true strategies to do so successfully:

They recognize their own filters. They’re able to identify when they’re being overly influenced by their assumptions and emotions or by another person’s opinion. Their ability to filter out the feelings that aren’t coming from their intuition helps them focus on what is.

They give their intuition some space. Gut instincts can’t be forced. Our intuition works best when we’re not pressuring it to come up with a solution. Albert Einstein said he had his best ideas while sailing, and when Steve Jobs was faced with a tough problem, he’d head out for a walk.

They build a track record. Leaders with conviction take the time to practice their intuition. They start by listening to their gut on small things and seeing how it goes so that they’ll know whether they can trust it when something big comes around. 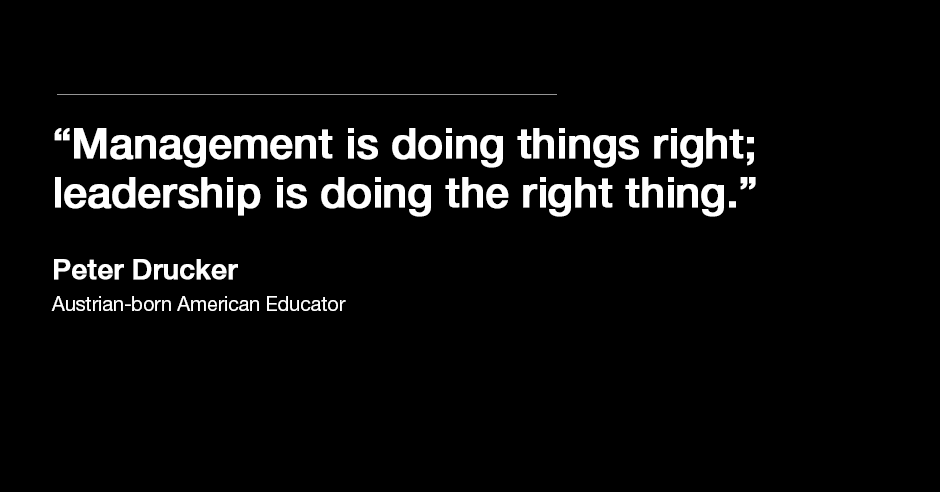 They’re relentlessly positive. Leaders with conviction see a brighter future with crystal clarity, and they have the energy and enthusiasm to ensure that everyone else can see it too. Their belief in the good is contagious. While this might look natural, leaders with conviction know how to turn on the positivity when the going gets tough. Positive thoughts quiet fear and irrational thinking by focusing the brain’s attention on something that is completely stress free. When things are going well and your mood is good, this is relatively easy; when you’re stressing over a tough decision and your mind is flooded with negative thoughts, this can be a challenge. Leaders with conviction hone this skill.

They’re confident (not cocky). We gravitate to confident leaders because confidence is contagious, and it helps us to believe that there are great things in store. The trick, as a leader, is to make certain your confidence doesn’t slip into arrogance and cockiness. Confidence is about passion and belief in your ability to make things happen, but when your confidence loses touch with reality, you begin to think that you can do things you can’t and have done things you haven’t. Suddenly it’s all about you. This arrogance makes you lose credibility.

Confident leaders are still humble. They don’t allow their accomplishments and position of authority to make them feel that they’re better than anyone else. As such, they don’t hesitate to jump in and do the dirty work when needed, and they don’t ask their followers to do anything they aren’t willing to do themselves.

They embrace that which they can’t control. We all like to be in control. After all, people who feel like they’re at the mercy of their surroundings never get anywhere in life. But this desire for control can backfire when you see everything that you can’t control or don’t know as a personal failure. Leaders with conviction aren’t afraid to acknowledge what’s out of their control. Their conviction comes from an unwavering belief in their ability to control those things that they can. They don’t paint a situation as better or worse than it actually is, and they analyze the facts for what they are. They know that the only thing they really control is the process through which they reach their decisions. That’s the only rational way to handle the unknown and the best way to keep your head on level ground.

They’re role models (not preachers). Leaders with conviction inspire trust and admiration through their actions, not just their words. Many leaders say that something is important to them, but leaders with conviction walk their talk every day. Harping about the behavior you want to see in people all day long has a tiny fraction of the impact you achieve by demonstrating that behavior yourself.

They’re emotionally intelligent. The limbic system (where emotions are generated in the brain) responds to uncertainty with a knee-jerk fear reaction, and fear inhibits good decision making. Leaders with conviction are wary of this fear and spot it as soon as it begins to surface. In this way, they can contain it before it gets out of control. Once they are aware of the fear, they label all the irrational thoughts that try to intensify it as irrational fears­—not reality­—and the fear subsides. Then they can focus more accurately and rationally on the information they have to go on. Throughout the process, they remind themselves that a primitive part of their brain is trying to take over and that the logical part needs to be the one in charge. In other words, they tell their limbic system to settle down and be quiet until a hungry tiger shows up.

They don’t ask, “What if?” “What if?” questions throw fuel on the fire of stress and worry, and there’s no place for them in your thinking once you have good contingency plans in place. Things can go in a million different directions, and the more time you spend worrying about the possibilities, the less time you’ll spend focusing on taking action that will calm you down and keep your stress under control. Leaders with conviction know that asking “what if?” will only take them to a place they don’t want, or need, to go to.

They’re willing to take a bullet for their people. Leaders with conviction will do anything for their teams, and they have their people’s backs, no matter what. They don’t try to shift blame, and they don’t avoid shame when they fail. They’re never afraid to say, “The buck stops here,” and they earn people’s trust by backing them up. Leaders with conviction make it clear that they welcome challenges, criticism, and viewpoints other than their own. They know that an environment where people are afraid to speak up, offer insights, and ask good questions is destined for failure.

Bringing It All Together

Conviction assures people that their work matters. They know that if they focus all their energy and attention in a determined direction, it will yield results. This belief does more than put people at ease—it creates a self-fulfilling prophecy of success.

Author: Dr. Travis Bradberry is the award-winning co-author of the #1 bestselling book, Emotional Intelligence 2.0, and the cofounder of TalentSmart, the world’s leading provider of emotional intelligence tests and training, serving more than 75% of Fortune 500 companies. His bestselling books have been translated into 25 languages and are available in more than 150 countries. Dr. Bradberry has written for, or been covered by, Newsweek, TIME, BusinessWeek, Fortune, Forbes, Fast Company, Inc., USA Today, The Wall Street Journal, The Washington Post, and The Harvard Business Review.

Despite COVID-19, the end of the office is far from nigh

For employees, the office provides a place for face-to-face interactions that technology will struggle to replicate, such as social interaction, mentoring and managing.

Will 2020 spark a completely new way of working? This management professional thinks so

Why skills - not degrees - will shape the future of work