The world’s first anti-ageing drug could help you live a healthy life until you’re 120. The US Food and Drug Administration (FDA) has said that tests will begin on older patients next year. The drug — a treatment for diabetes known as Metformin — has already been shown to extend the life of animals.

The goal is to slow the ageing process. While that’s long been the subject matter of science fiction, our growing understanding of DNA and what happens as we age is leading to optimism that ageing could even be stopped. And if that does become possible then it might uncover ways to curb diseases such as cancer, diabetes and dementia, that are all linked to ageing.

The idea of extending lives by almost 60% would be a major scientific breakthrough and, since metformin is relatively inexpensive, one not confined to wealthier nations. However, success would bring new challenges.

In a world in which people live into their 120’s would we have to work until we’re 100 or older? What would happen to labour markets as fewer people retire and working lives double in length? And what societal changes would come about as middle age starts in your 70s or later and great-great-great grandparents become common?

An early glimpse into such a world comes from Europe and its rapidly ageing population. In the World Economic Forum’s Global Population Ageing Report, nine of the 10 nations with the largest populations of over-60s and over-80s are in Europe. Only Japan has more senior citizens.

In addition to the frequently expressed concerns over pensions, work and health, the report notably identifies changes in business practices as a major challenge. Turning the promise of longer lives into something that works economically will require big changes in attitudes. 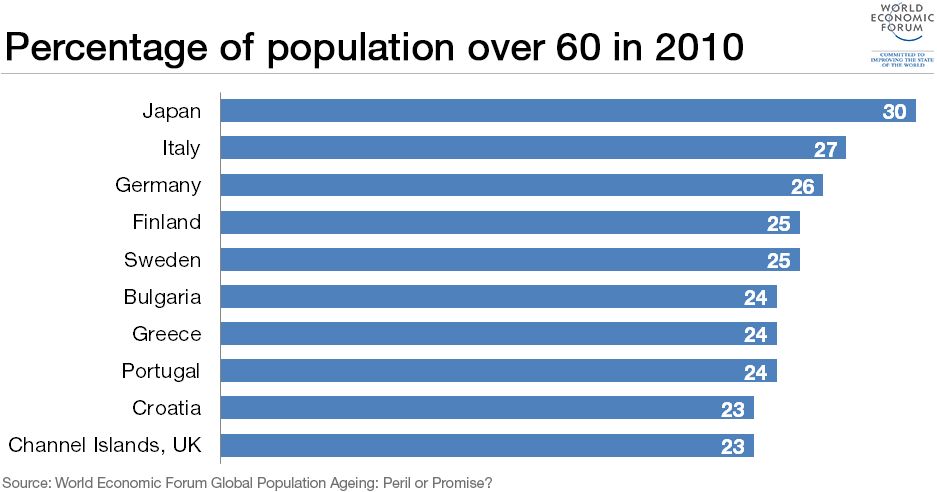