Horrifying images posted on social media for all the world to see show men accused of homosexuality thrown off high buildings, stoned to death, or shot in the head by extremist groups, including the Islamic State (known as ISIS) in Iraq, Syria and Libya.

This was the worst, but by no means the only, violence directed against lesbian, gay, bisexual and transgender (LGBT) people in all parts of the world. According to a report on discrimination and violence against LGBT people by the United Nations High Commissioner for Human Rights in June:

Since 2011, hundreds of people have been killed and thousands more injured in brutal, violent attacks… Other documented violations include torture, arbitrary detention, denial of rights to assembly and expression, and discrimination in health care, education, employment and housing.

But there was also very good news for LGBT people in 2015. In May, Mexico and Ireland extended marriage to same-sex couples. A month later, Mozambique decriminalized homosexuality, and the United States Supreme Court ruled in favor of marriage equality, allowing same-sex marriages throughout the country

Malta, Ireland, and Colombia all separated the legal process for transgender recognition from medical procedures. In June, Colombia delivered a joint statement to the UN Human Rights Council on behalf of 72 countries, from all regions of the world, affirming a commitment to end violence and discrimination based on sexual orientation and gender identity. 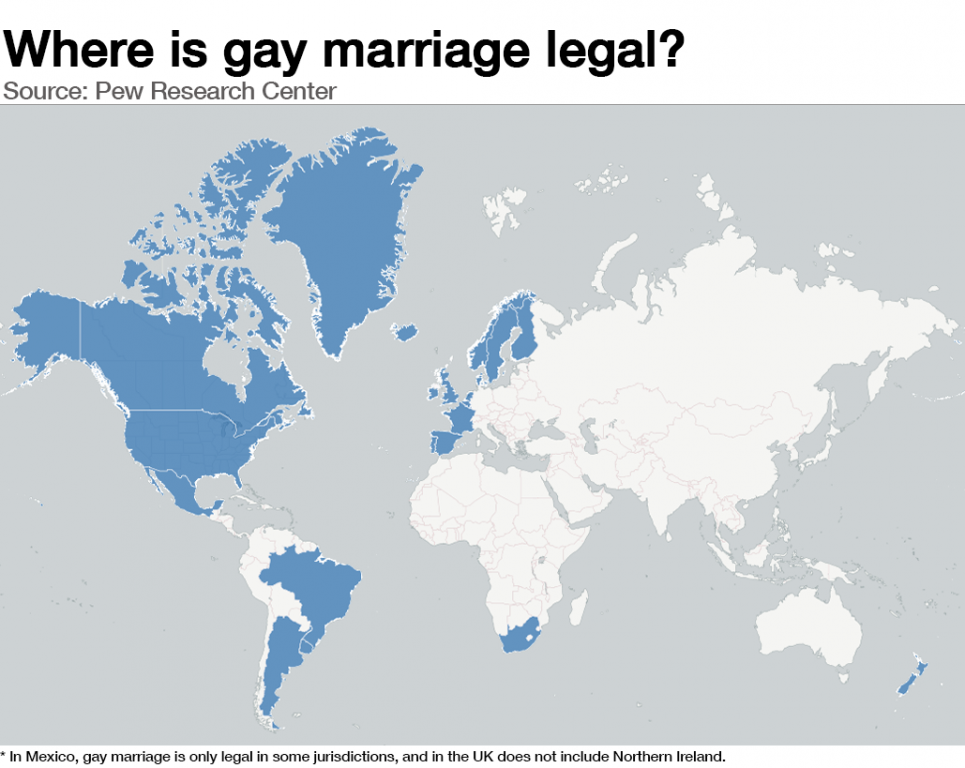 Extreme violence and rapid progress toward equality are the bookends of 2015. Negative snapshots include proposed draft laws that would mimic Russia’s notorious “propaganda law” by setting penalties for providing objective or positive information about homosexuality in Kyrgyzstan, Kazakhstan and Belarus.

In a setback for transgender women, a Malaysian federal court reversed a ruling that had found unconstitutional a Sharia (Islamic law) provision that forbids “a male person posing as a woman,” and religious authorities continued arresting trans women. In Brunei and Indonesia’s Aceh province, new Sharia laws call for public lashing, imprisonment and even the death penalty for same-sex conduct. Egypt imprisoned gay men and transgender women on “debauchery” charges and Morocco routinely imprisoned men accused of homosexuality.

LGBT people in Nigeria experienced violence and abuse under the shadow of an extreme anti-LGBT law. In Gambia, home of the African Commission on Human and Peoples’ Rights, gay men and lesbians fled a politically motivated crackdown. In the United States, after a campaign of fear-mongering against transgender people, voters in the city of Houston rejected a non-discrimination ordinance that would have prevented discrimination not only on the grounds of gender identity and sexual orientation, but also for race, age, and other categories.

Positive snapshots during the year include progress for transgender people in India and Thailand, where legal developments hold the promise for increased protection and social inclusion. LGBT groups in Kenya and Tunisia have been allowed to register and operate in an important assertion of the right to association. Malawi upheld a moratorium on arrests for consensual same-sex conduct, pending a court review in which activists challenged discriminatory laws. And Nepal’s otherwise deeply flawed constitution includes a ray of light in a clause protecting sexual and gender minorities.

A plea for protection, and a pushback

Developments at the United Nations give insight into global trends and emerging patterns on matters relating to sexual orientation and gender identity. On September 29, at a high-level LGBT core group event at UN headquarters, Secretary-General Ban Ki-moon delivered an impassioned plea for the protection of LGBT people worldwide, and on the same day 12 UN agencies issued a joint statement on combatting violence and discrimination against LGBT and intersex people – the first of its kind.

But there is strong pushback. Russia has for years been positioning itself as the champion of “traditional values,” in alliance with other countries, primarily from the Middle East and Africa. This provides a convenient positive spin for rights-abusing states to cloak crackdowns on independent groups, restrictions on the political opposition, and moves to curtail individual freedoms as upholding “traditional values.”

Russian-sponsored UN resolutions on “traditional values” have attempted to undermine the universality of human rights. Russia and its allies have sought to create a false dichotomy between traditional values and human rights. And the rights of LGBT people, along with women’s reproductive rights, are the lightning rods in this debate.

This dynamic played itself out in an Egypt-led resolution on the “protection of the family” that the Human Rights Council adopted in June. The resolution seeks to enshrine a narrow conception of the family as the protector of “morals” and “traditions,” with no meaningful consideration of whether these comply with international human rights standards. Russia blocked attempts by South Africa, Brazil and Uruguay to recognize a broader definition of family.

Homophobia as a political tool

Such resolutions are thinly veiled attempts to use the language and institutions of human rights to push back against the rights of LGBT people, and all those who don’t fit patriarchal norms. This coincides with the increased political use of homophobia, by leaders who have portrayed themselves as guardians of embattled “traditional values” to distract attention from their failures of governance.

Rhetoric that positions LGBT people as the antithesis of “morality” and “tradition” is dangerous and contributes to a hostile climate in which extreme violence occurs.

While the past year has seen significant gains, many challenges lie ahead. In countries where repressive governments attack civil society organizations and prevent them operating freely and openly, LGBT people will be forced to live a shadow existence. Civil society organizations should reject attempts by governments to manipulate anti-LGBT animus for short-term political gain, and LGBT groups should avoid working in isolation and support a broader human rights agenda.

Have you read?
My 30 years out and proud in business
Explainer: the state of LGBT rights today
The real story of the gay Middle East
Why Commonwealth countries need to wake up to LGBT rights

COVID-19 could wipe out gains in equality for women at work - U.N.

The International Labour Organization (ILO) has warned that COVID-19 could wipe out the progress in gender equality in recent decades.

What is systemic racism, and how can we combat it?

Systemic racism affects the job opportunities, pay and even the health of ethnic minorities. But what is it and will things change?