Is this a new era for the Arctic?

This article is published in collaboration with Medium.

When I took office as Norway’s foreign minister in 2005, the government of Jens Stoltenberg defined our policy toward the Arctic and the High North as a national priority. The main policy challenge of the Arctic at that time was the lack of international interest. As we enter the second decade of the 21st century, the Arctic is emerging as a region of vast potential, growing coastal state engagement, and increasing attention from all corners of the globe, including from China and India.

This transformation has been driven by climate change, with melting ice as the most striking evidence of a warming planet. New transport routes have opened up, connecting the Atlantic to the Pacific and paving the way for the exploration of resources ranging from fish to minerals. Meanwhile, Russia has emerged as a regional power after the internal turmoil of the post-Soviet period.

This combination could well spur rising tensions, rivalry and even conflict. But this is not inevitable: until the recent strain in Russia-Western relations, we experienced what could be described as “High North, Low Tension”.

Could we return to lower tensions in the High North — or are we heading toward confrontation and erupting crises in the Arctic?

In the past, the Arctic lay outside mainstream political attention. Even trained scholars of international relations questioned whether established norms and standards of international law applied to the Arctic’s hostile environment. However, despite its extreme conditions, the Arctic is also vulnerable. Maintaining that such norms and standards do indeed apply is a priority in Norway’s foreign policy, working in concert with Russia and the other coastal states: the U.S., Canada, Denmark and Greenland. 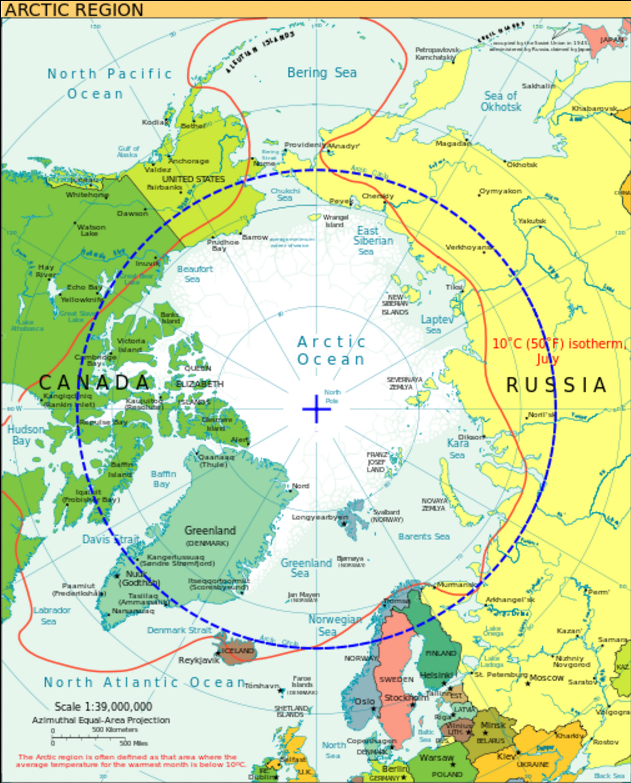 The core principle is as key as it is straightforward: the Arctic is an ocean, just like the Atlantic or any other ocean, and therefore the UN Convention on the Law of the Sea (UNCLOS) applies, giving coastal states rights as well as responsibilities. In 2007, in Greenland’s Illulisat, the foreign ministers of the Arctic coastal states (as well as Iceland, Sweden and Finland) signed a declaration pledging support and compliance with the text of the established law of the sea.

Today, a wide variety of state and private actors are actively engaged in the Arctic through a broadening range of undertakings, including cruise ship traffic, research, and a growing military presence at sea and in the air. The emerging picture is one where these increasing activities and complex interactions are potentially at odds with each other.

These days, a popular image of the Arctic is one of increasing tension, with the media focusing on a modern “race to the North Pole”. When a Russian expedition planted their country’s flag on the sea bed of the North Pole a few years ago, it certainly did not make the territory Russian. However, Western media portrayed this as part of some broader Russian ambition to dominate the region.

In fact, Russia has largely followed the statutes and principles of the law of the sea in its border delimitation efforts. Like Norway, Russia has mapped the extension of its vast continental shelf. In good order, Russia recently submitted its claims to the Commission on the Limits of the Continental Shelf.

As with the planting of the flag, Western media described Russia’s submission in the same vain as the colonial powers “scramble for Africa” in the 18th century.

Similarly, the International Maritime Organisation (IMO) — a UN-sponsored body — has, after long negotiations with broad participation, succeeded in establishing the Polar Code which, when it takes effect in 2017, means that ships travelling in the Arctic will have to meet set standards pertaining to trained personnel, limits to the spillage of oil, disposal of toxic materials and trash, and so on. We are beginning to see the development of broadly shared norms as the Arctic emerges as a global investment opportunity. This year, the World Economic Forum’s Global Agenda Council developed an Investment Protocol on the Arctic that aspires to promote sustainable economic growth and to build resilient societies in a fair, inclusive and environmentally sound manner.

For sure, Russia is the dominant coastal state in the Arctic. And it is true that Russia has a considerable military presence in the north. The Kola peninsula remains the headquarters of the Northern Fleet, and Russia is substantially upgrading and improving its military network, reopening military bases and establishing a new strategic military command in the region.

Such military presence warrants attention and concern, not only among Russia’s neighbours. But should it be read as steps toward conflict in the Arctic?

We should not draw such conclusions based on instincts inherited from the Cold War: so far, and despite the geopolitical tensions, the track record in this region has been one of peaceful settlement of disputes.

A closer look at a map centered on the North Pole is instructive: Russia has a coastline circumventing more than half of the pole.

While Russia has clear and legitimate security interests in the north, this does not necessarily equate to the threat of conflict: Vladimir Putin’s Russia does not practice one singular (militarily strident) neighbourhood policy, it rather follows different approaches with its many neighbours.

To mention but one example: on 27 March 2014, shortly after Russia annexed Crimea, Moscow concluded an agreement with Denmark on the modalities for the delimitation of their continental shelves in the Arctic. This came as a surprise to some, but it could also be seen as part of a broader pattern. Even during the Cold War, Norway and the Soviet Union were able to establish a fisheries agreement in the disputed area between the two states. We were able to practice “High North, Low Tension”, even when nuclear tensions on the geopolitical scene ran high.

In the Arctic, there is less risk of conflicts rising from the region, but greater risk that tensions may spill over from elsewhere, particularly in a context of increasing activity and interaction.

It is of global significance that this risk should be avoided: key to stability and conflict prevention in the Arctic will be adherence to the broadly accepted “rules of the game” and adequate cooperative governance mechanisms. The continental shelf delimitation agreement serves as a good example: Arctic nations have so far followed rules-based procedures to settle their overlapping claims, with UNCLOS not only providing a legal framework but generating common understandings and predictability in the region. U.S. ratification of UNCLOS would greatly strengthen this framework for interaction and cooperation globally, and particularly in the Arctic. It would serve the interests of both the U.S. and other coastal states by providing a basis for increased U.S. engagement with actors in the northern region, including Russia, based on commonly accepted rules and principles.

Similarly, the International Maritime Organisation (IMO) — a UN-sponsored body — has, after long negotiations with broad participation, succeeded in establishing the Polar Code which, when it takes effect in 2017, means that ships travelling in the Arctic will have to meet set standards pertaining to trained personnel, limits to the spillage of oil, disposal of toxic materials and trash, and so on.

Until the turn of the century, the Arctic was a region with weak multilateral mechanisms for cooperation and dispute settlement. Since the early 1990’s, the Barents cooperation has brought together the five Nordic countries and Russia to promote cross-border contacts and peaceful development in northern Europe. This was a truly innovative arrangement — comprised of the Barents Euro-Arctic Council and a Regional Council — combining classic inter-state relations with the involvement of local authority entities.

The creation of the Arctic Council in 1997, with the eight Arctic nations as members, provides a further arena for cooperation on shipping, oil and gas, infrastructure, tourism, indigenous peoples, scientific research and a whole host of other Arctic issues. States and organisations far beyond the Arctic have expressed interest in the Council and more are becoming observers, including China and India. Where the biggest challenge of the Arctic Council was once that few knew about its existence, the challenge now is how to respond to the growing interest and desire to participate.

A New Era in the Arctic

The pursuit of national interest through these mechanisms, based on commonly accepted rules and regulations, has to date been the strongest stabilising factor in the High North. So it should be in the new era we see emerging in the Arctic.

Climate change, access to resources and technological innovation are transforming the Arctic region.

It is our common responsibility to prevent tensions and competition from spiraling out of control.

The Arctic holds many key assets for future global governance. Not least, it has the potential to contribute to world food security at a time when population growth is outstripping production. According to the UN’s Food and Agriculture Organisation, world food production must increase 60 per cent by 2050 to meet growth in demand, at the same time that climate change is predicted to severely challenge current production rates.

We are approaching a situation where the Arctic ocean will be nearly ice-free during the northern summer. One side effect will likely be a steady increase in shipping, particularly along the North East Passage. There will be increased economic activity in the Arctic. Technological innovations will contribute to vessels more capable of operating in the harsh northern climate.

But as we contemplate these innovations and opportunities, it is essential to remember that the Arctic ecosystem is fragile, and needs to be protected. We need to have good infrastructure and practices for search and rescue operations, preparedness for oil spills, and communications. There is much to be achieved through intensified cooperation. The melting ice of the High North is a barometer of the scope and pace of global warming. Rising sea levels and changing migration patterns of fish stocks will themselves warrant significant research efforts.

The Arctic will almost certainly be a very different place 20 to 30 years from now. Whether it is a place of increased activity and interaction depends on the steps we take today. Each cooperative step decreases the likelihood of tension. What the High North needs is the strongest, most durable and effective tool in the security policy toolbox: conflict prevention.