The tech industry has a gender diversity problem. The figures speak for themselves: according to the latest data, none of the leading technology companies have achieved workplace gender parity. At Microsoft, for example, just 12.5% of leaders are women. 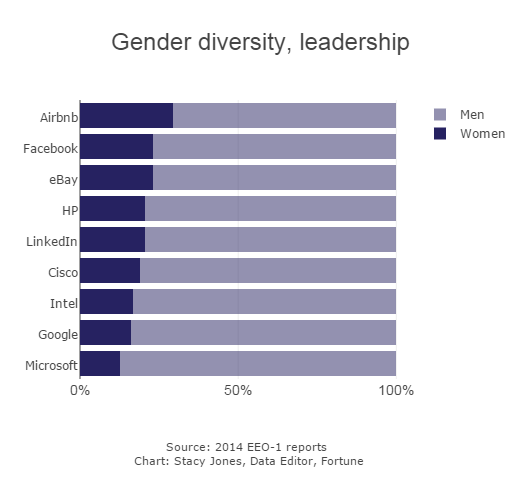 Part of this is a pipeline issue: computer science courses tend to be dominated by white men (although this wasn’t historically the case). So when the likes of Google and Twitter want to hire people, they’re drawing on a limited and rather homogenous pool of candidates.

But it’s also a question of stereotypes. Perhaps because tech is already such a male-dominated environment, many people just don’t think of it as a viable career path for women. One tech leader would like to change those attitudes.

Over the weekend, Mark Zuckerberg shared his New Year’s resolution with his Facebook followers. One of them replied, saying that she “tells her granddaughters to date the nerd in school because he may turn out to be a Mark Zuckerberg.” His response? “Even better would be to encourage them to *be* the nerd in their school so they can be the next successful inventor.”

The progressive attitude is in line with his company’s stated policies: on its website, Facebook writes extensively about its commitment to increase diversity. “Diversity is central to Facebook’s mission of creating a more open and connected world: it’s good for our products and for our business.” But the company has its work cut out. According to its latest numbers, just 32% of staff are women, a figure that drops to 16% for tech roles.

Have you read?
Mark Zuckerberg and 5 other men who put family first
Where are the missing women in tech?
Diversity in tech: could the solution be this simple?

This is where U.S. clean energy jobs can make the biggest difference