State-owned enterprises in the global economy

“The rise of state capitalism – the spread of a new sort of business in the emerging world will cause increasing problems” argued a January 2012 special issue of The Economist. State-owned enterprises have always been an important element of most economies, including the most advanced ones. However, the state sector has traditionally been characterised by orientation towards domestic markets and often lagging business performance. Today, some contemporary state-owned enterprises are among the largest and fastest expanding multinational companies. They increasingly compete with private firms for resources, ideas and consumers in both domestic and international markets.

This new trend has attracted the attention of the media which reports regularly on large cross-border deals sealed by state-owned firms. It has also been noticed by policymakers and business, many of whom are calling for a ‘levelling of the playing field’ in international trade and investment. The discussions of new state-owned enterprises disciplines in the ongoing Trans-Pacific Partnership negotiations and the implementation of stricter national investment screening mechanisms for state-owned enterprises in some countries are testimony to this.

Yet, there is still very little reliable information on the importance of state-owned enterprises in today’s global markets and on the exact nature of the advantages they may be enjoying because of their ownership. Our recent research attempts to shed light on these issues (Kowalski, Büge, Sztajerowska and Egeland 2013), adding to the rather thin existing research base.

Some magnitudes and trends can be inferred from existing studies of individual countries but different definitions of state ownership and state control make cross-country comparisons difficult (e.g. Christiansen 2011). To start filling this gap, our recent paper investigates the extent of state ownership among the world’s 2,000 largest companies – the so-called Forbes Global 2,000 – and their 330,000 subsidiaries worldwide and attempts to characterise their influence on global markets.

To identify state-owned enterprises among top global firms we use firm-level ownership data and take into account both direct and indirect ownership links.

This represents more than 10% of the combined sales of the whole Forbes Global 2,000 and is equivalent to 6% of world GDP, exceeding the GDPs of countries such as Germany, France or the UK (Figure 1).

Source: Authors calculations based on Forbes Global 2000 and WDI.

Caveat to the data construction

While these figures are clearly imposing, they should be seen as conservative for at least two reasons. First, our data does not include unlisted state-owned enterprises such as statutory enterprises in, for instance, postal services or utilities. Second, the state might also exert de facto control over a firm even while holding a minority share, for example, through a golden share or any other specific enabling legislation.

To estimate which countries have the highest state-owned enterprise presence among their top firms and to ensure comparability, we use the equally weighted average of shares of state-owned enterprises in sales, assets and market value of the country’s top ten firms (Figure 2). The top five countries are China (96%), the United Arab Emirates (88%), Russia (81%), Indonesia (69%), and Malaysia (68%). State ownership appears to dominate, but is not restricted to, the emerging economies. While the size of these shares decreases somewhat when we extend coverage to a country’s 200 largest firms, their relative size remains unchanged. 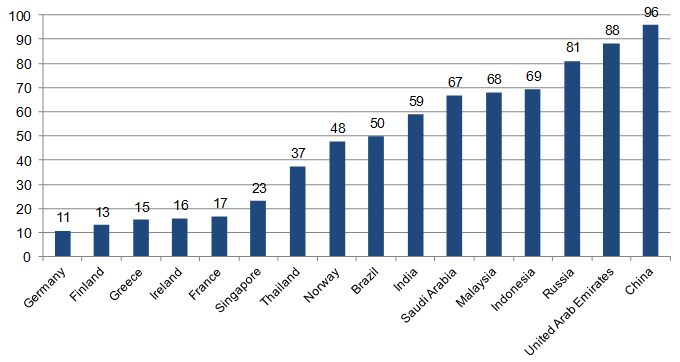 Note: Only countries with shares above 10% are shown.

We use similarly constructed shares to identify economic sectors where state-owned enterprises are most prevalent. Not surprisingly, sectors with the highest ratios – between 20% and 40% – are those related to the extraction or treatment of natural resources, energy and heavy industries. Yet, some services sectors – such as telecommunications, financial intermediation, warehousing, architectural and engineering activities, and a few manufacturing sectors, record state-owned enterprises shares above 10% as well (Figure 3). Note: Only sectors with shares above 10% are shown.

Why does it matter and what policy tools are available?

The significant extent of state ownership among the world’s top companies raises a question about its impact on the global competition. The triple role of the government as a regulator, regulation enforcer and owner of assets opens a possibility of favourable treatment granted to state-owned enterprises in some cases. These advantages can take the form of, for instance, direct subsidies, concessionary financing, state-backed guarantees, preferential regulatory treatment, exemptions from antitrust enforcement or bankruptcy rules. They may well be justified in a domestic context, for example, to correct market failures, provide public goods, and foster economic development. But if their effects extend beyond borders, they may undermine the benefits from international trade and investment, which are predicated on the basis of non-discrimination and respect for market principles. Two recent OECD workshops on the issue (one in 2012 and in 2013) gathered numerous representatives of global firms and governments revealed this is indeed a serious concern.

Given these potential anti-competitive effects of state ownership on the global market, what tools are available to address them? We look at those in detail in our paper, surveying existing regulatory frameworks at the national, bilateral or multilateral level, and consider their relative strengths and weaknesses. For example:

However, traditional antitrust standards apply to profit maximising firms and are not aimed at preventing subsidies and artificially low prices –except where these are manifestly motivated by predatory strategies (see also Capobianco and Christiansen 2011).

Some of these frameworks refer specifically to state-owned businesses (e.g. in Australia) while others are ownership-neutral. In the EU, for example, the state interactions with private and state-owned firms alike are governed by a set of special rules in the areas of antitrust, state aid and transparency.

The disciplines that they impose on government regulations and actions do not distinguish between situations where the provider of the goods or services covered by the regulation or action is a public or a private entity. They can nevertheless discipline some government policies and actions involving state-owned enterprises, for example, when they receive trade-distorting state subsidies. Violation of national treatment or most-favoured nation principles, granting of subsidies or other forms of influencing trade by state-owned enterprises themselves can also be covered by WTO disciplines if these enterprises can be proven to be “vested with or performing a governmental function”. Yet, some of the definitional ambiguities have rendered application of these disciplines uncertain and some provisions allow countries to exempt state-owned enterprises’ actions from certain WTO disciplines (e.g. in the GATS).

Some of these regulatory frameworks have been used to contest actions or advantages of state-owned enterprises (Kowalski at al. 2013) and in some of these cases the relevant ruling bodies have found that governments have indeed pursued state-owned enterprises strategies inconsistent with these frameworks. Yet, in some cases these challenges were found to be without merit.

This article originally appeared in voxeu.org

What will rising interest rates do to  inflation?

How private capital can be leveraged to fight climate change