For the five years from December 2008 to November 2013, the US unemployment rate remained above 7%, peaking at 10% in October 2009. This period of high unemployment is not well understood. Macroeconomists have proposed a number of explanations for the extent and persistence of unemployment during the period, including:

In our opinion this lack of consensus is due to a gap in macroeconomic theory: we do not have a model that is rich enough to account for the many factors driving unemployment – including aggregate demand – and simple enough to lend itself to pencil-and-paper analysis.

The well-known fix-price model of Barro and Grossman (1971), which was the first formal representation of a Keynesian world with rigid prices and wages, was a promising candidate because it captured the link between aggregate demand and unemployment. That model relied on disequilibrium, whereby supply can exceed demand because prices do not adjust. The Barro-Grossman model fell out of favour, perhaps because it lacked tractability, or because of the development of equilibrium business-cycle models such as the real-business-cycle model of Kydland and Prescott (1982). In the data we observe that product and labour market tightnesses fluctuate significantly, suggesting that price and real wages are not fully flexible over the business cycle. A simple way to understand the argument is to think again about restaurants. Restaurant prices usually remain constant from morning to night while demand fluctuates significantly over the course of the day. As a result, restaurants are much busier at meal times than between them. In contrast, if prices were flexible, a restaurant would be able to keep the rate of occupation of its tables constant by adjusting prices up and down when demand increases and decreases. Figure 1 depicts the empirical measures of product and labour market tightnesses. Both measures fluctuate sharply over the business cycle, and in particular, both collapse in 2008 and 2009 during the Great Recession. The implication is that price and real wages are somewhat rigid over the business cycle. Figure 1 shows that prices are somewhat rigid in response to macroeconomic shocks. The next step is to ascertain what these shocks are. In the data we observe that employment is positively correlated with labour market tightness, which suggests that unemployment fluctuations are mostly caused by labour demand shocks and not labour supply shocks.

The argument is simple. If restaurants do not want to hire anymore, employment will fall. At the same time, unemployed workers will take longer to find a job, but recruiting will be easier for restaurants that still want to hire; that is, labour market tightness will be low. In sum, a negative labour demand shock leads to falls in both employment and labour market tightness.

Figure 3 shows that product market tightness and output are positively correlated over the business cycle. The implication is that labour market fluctuations are mostly driven by aggregate demand shocks and not by technology shocks. In particular, product market tightness fell sharply during the Great Recession in 2009, consistent with a collapse in aggregate demand. 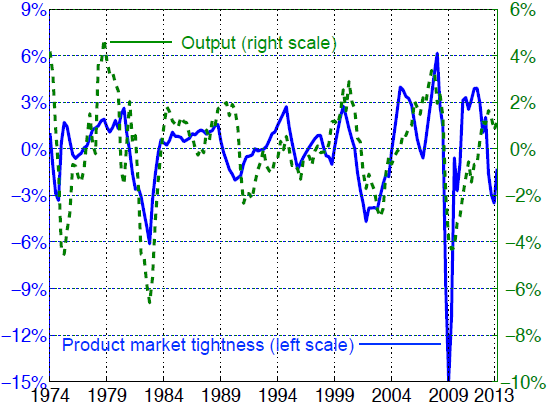 Through the lens of our simple model, the empirical evidence suggests that price and real wage are somewhat rigid, and that unemployment fluctuations are mainly driven by aggregate demand shocks.

Authors: Pascal Michaillat, Lecturer in the Department of Economics, LSE and Emmanuel Saez, Professor of Economics and Director of the Center for Equitable Growth, University of California Berkeley