The robot revolution has already begun

At Carnegie Mellon University in the United States, robots roam the corridors, carrying out simple tasks for Professor Manuela Veloso and her team. These CoBots, or collaborative robots, can escort guests through the maze-like building, or carry packages from reception. If they realize they cannot perform part of a task, they will simply ask for help.

This is the revolutionary aspect of Veloso’s work. “The option was to wait, to do more research until all the robots have arms, all the robots can learn all situations, and they can handle all the uncertainty of perception and cognition, and that would probably take an eternity,” she explains.

Instead she taught the CoBots how to recognize when a task exceeded their capabilities and to seek help from a human, another robot, or even the internet. “Intelligence is not just deducing facts from the knowledge you have, or learning new facts, but also recognizing that you don’t know, or can’t do, or can’t understand.”

It is tempting to suggest only a woman could have made this breakthrough. Veloso laughs. “It’s more likely because I am a scientist. Since when do we know it all? We don’t.”

Robotic guide dogs?
She envisages a future where robots clean your house while you are at work. They could work as guide dogs for the blind, escort people through museums or fetch and carry in hospitals. These machines will also act as mobile sensors, accumulating data on their travels – about WiFi strength, temperature or humidity – which could help plan our environments. The impact of robotics is one of the technological “revolutions” that is on the agenda at the World Economic Forum’s Annual Meeting of the New Champions in Tianjin, China.

Robots will be ubiquitous, Veloso says, and it could happen soon. “It could be next year if there is a company that really embraces this seriously and tries to solve all the legal issues and business issues. We are in the hands of industry. If Google would decide to make these robots available in all our public spaces or homes, it could happen.”

So far the market for robots – outside of heavy industry – is small. Some households will own an automated vacuum cleaner or lawn mower. There are toys and educational robots on the market, but it remains a niche product.

In 2012, about 3 million service robots for personal and domestic use were sold, according to the International Federation of Robotics (IFR), making the market worth $1.2 billion. But it is growing fast, with sales up 20% on 2011.

Next generation: smaller, smarter, safer
The value of the market for industrial robots is much harder to estimate, as the cost of this equipment is usually market sensitive. Instead the IFR estimates that 1.5 million industrial robots were in operation by the end of 2012. China is the fastest-growing market, with almost 37,000 industrial robots sold there last year.

Overall, the industry is expected to grow rapidly. Current estimates suggest the market for robots in non-military sectors will be around $120 billion a year by 2020-2025.

Robots have, of course, been used in manufacturing for several decades, to carry out physically difficult, dangerous or dirty jobs, such as welding and spray painting. These machines have typically been bolted to the floor and fenced off to protect workers. Dick Elsy, who runs the UK government’s centre for innovation in high-value manufacturing, says: “Most companies spend more on keeping people out of robot facilities than they do on the robots themselves.”

But the next generation of robots will be smarter, as machine vision, sensors and artificial intelligence all improve. They will be smaller and safer, meaning they can work alongside human beings. “You could have somebody doing a manual, quite intricate operation that required certain dexterity, working alongside robots that did more heavy lifting, so you get a much more productive environment,” says Elsy.

These robots will also be more useful in non-industrial contexts. They will start taking on cleaning and maintenance jobs. Further advances in technology will enable new types of surgical robots, robotic prosthetics, and “exoskeleton” braces that could help people with limited mobility.

Tech optimists believe this revolution will boost productivity and bring economic growth. A McKinsey report from 2013 estimates that the application of advanced robotics across healthcare, manufacturing and services could generate a potential economic impact of $1.7 trillion to $4.5 trillion per year by 2025.

Who will be left behind?
At the same time, this revolution will make huge swathes of the working population redundant. In their much-discussed book, The Second Machine Age, Erik Brynjolfsson and Andrew McAfee compare the shift to the first industrial revolution, saying technological progress will leave a lot of people behind.

There are, they say, clear winners and losers in this race. “There’s never been a better time to be a worker with special skills or the right education, because these people can use technology to create and capture value. However, there’s never been a worse time to be a worker with only ‘ordinary’ skills and abilities to offer, because computers, robots and other digital technologies are acquiring these skills and abilities at an extraordinary rate.”

But the pair are not relentlessly negative. They point out that machines can have very different strengths and weaknesses than humans. “When engineers work to amplify these differences, building on the areas where machines are strong and humans are weak, then the machines are more likely to complement humans rather than substitute for them.” The most effective production, they say, will require humans to work alongside machines. Then the value of both will grow.

This is no easy task. Building robots to have successful working relationships with humans will take more than just clever engineering. Justine Cassell, the director of the Human-Computer Interaction Institute at Carnegie Mellon University, explains: “Increasingly, I’ve discovered in research about people, that’s it’s not just the informational aspects of our behaviour that matters in collaboration, it’s also the social aspect. We’re more likely to collaborate effectively with somebody that we trust. Nobody has ever thought about that before when they thought about building computers.”

Meaningful conversation – with a robot
This research led her to build so-called embodied conversational agents (ECAs) – software that can have meaningful conversations with human beings. Crucially, these virtual humans also use hand gestures and facial expressions to build trust and develop a rapport with their human interlocutors. 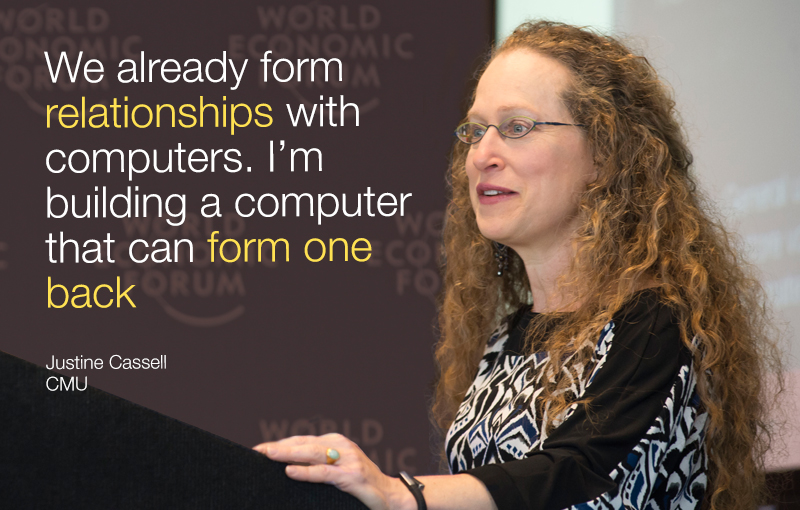 Cassell has studied human interaction down to the minutest level, noting down what people do with their eyebrows, where they look, what they do with their hands, whether they tell jokes, and how successful they are at collaborating.

“We need to understand how people work, in order to build computers that work well with people.” She then builds those social capacities into her ECAs so that people trust and feel a rapport with them, enabling them to collaborate successfully.

Even without this kind of software, Cassell says humans form attachments to machines. More than 80% of people who own a Roomba automated vacuum cleaner give it a name. Colin Angle, the chief executive of iRobot, which makes Roombas – tells a story about a customer service enquiry he once had. A woman explained that her robot had a defective motor. He told her to send it back and the company would replace it. “No,” she said. “I’m not sending you Rosie.”

Cassell laughs: “We have already formed relationships with the computers around us. What I’m doing is trying to build a computer that can form a relationship back.”

Author: Josephine Moulds is a journalist working for the World Economic Forum.

Image: ASIMO, a humanoid robot created by Honda, serves tea to a visitor during the Johannesburg International Motor Show at Nasrec in Johannesburg, October 6 2011. REUTERS/Siphiwe Sibeko

Digital currencies are cutting across borders. Here's how regulators can catch up

The Saint Lucia CFR report is the result of multistakeholder discussions with experts, thought leaders and representatives from more than 50 institutions, including public-sector institut...

Explainer: What is a DAO - and how did one of them almost succeed in buying the US Constitution?