It is up to us all to beat gender stereotypes

Next year is the 20th anniversary of the World Conference on Women in Beijing, which set out an ambitious global agenda for gender equality. Since then, women and men around the world have worked hard to make healthcare, education, economic and political participation equally accessible to all genders. There has been progress, but a lot of work still lies ahead. To this day, no country has reached full gender equality and the continuous presence of gender gaps keeps draining the global economy.

Today, there is an increasing number of education opportunities and women seek them eagerly. In Lithuania, almost 92% of women have secondary or higher education. Across the EU women account for more than a half of all the university graduates, mostly in the fields of humanities, education, health and welfare. However, only a fraction of women graduate in engineering, math and sciences. Our education systems are yet to find effective ways to break out of stereotypes that certain academic fields – and certain jobs – are for girls while others are for boys.

In fact, we are faced with a paradox. Better access to education for women has not led to equal economic opportunities. Reconciliation of family and work remains exclusively a female affair. This undermines the family and increases the discrimination of women in the labour market. In the EU, the employment rate for men is close to 75%, while it is only 62% for women. No country in the world has managed to close the economic participation gap. Women continue to be underemployed, underpaid and underrepresented in top managerial and executive positions in business and politics. This results in continuous waste of the human talent and impedes economic growth. 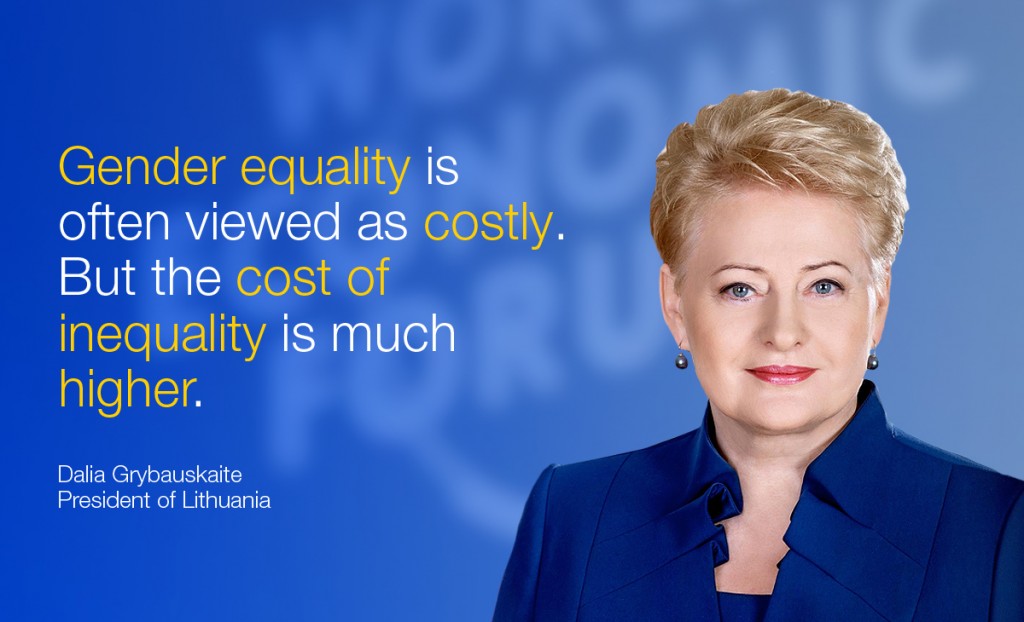 At a time when the global economy is still recovering from the crisis, we must fully capitalize on the skills and knowledge of all people, regardless of their gender, especially given that the increase in the employment rate of women has already contributed to unprecedented growth over the last 50 years.

Our common goals for global sustainable growth and poverty reduction are impossible to achieve without the greater involvement of women in economic and political life. Women are key to creating more jobs, boosting research and development, encouraging innovation, increasing competitiveness and fighting social exclusion. In the EU alone, closing the economic participation gap entirely would mean an increase of around 12% in GDP per capita by 2030. Gender equality is often viewed as a costly endeavour. But it is time to recognize that the cost of inequality is much higher. And we can no longer afford it.

Lithuania has been consistent in its effort to achieve equality between men and women. We have adopted laws that protect women against domestic violence, action plans that support gender mainstreaming, and we continue to take specific measures to improve the actual situation of women. Lithuania’s National Programme for Equal Opportunities has already brought tangible results. The gap between women’s and men’s full employment rate in Lithuania (68% and 71%, respectively) is the smallest in the EU, while the pay gap, currently at 12.6%, is below the EU average. It is no coincidence that the European Institute for Gender Equality, which does an important job raising awareness and promoting gender equality across the EU, is located in Vilnius. And yet we are keenly aware that there is room for improvement.

As a global community, we have already developed numerous national and international programmes, strategies and initiatives that aim to bridge the gender gap. There are plenty of best practises to follow. Sophisticated tools, such as the World Economic Forum’s Global Gender Gap Index, which show the exact nature and scope of the problem are available. So there are more than enough measures and incentives to move forward. But the change is slow.

Closing the global gender gap requires genuine political will to implement structural reforms in labour markets and social security systems. Leaders and decision-makers have a responsibility to ensure not only equal opportunities, but also a possibility of equal choices regarding education, career and family life.

Gender equality must also be made an inseparable part of the post-2015 global development agenda. However, it is also up to every man and woman to have courage and be part of the change and improve our daily social, political and business practices, so that they are not embedded in gender stereotypes.

Author: Dalia Grybauskaite is the President of the Republic of Lithuania. She is also Chair of the Council of Women World Leaders.

Image: Construction takes place on The Shard building (at rear) as visitors pose on the balcony at One New Change shopping mall in London November 16, 2010. REUTERS/Suzanne Plunkett