What’s the biggest challenge for Africa in 2015?

Tellingly, this year’s Survey on the Global Agenda 2015 revealed education and skills development as the biggest challenge facing Africa in 2015, followed by building sustainable governance systems and the delivery of hard infrastructure. Almost every stakeholder group ranked education as the most important issue; respondents also suggested that business is the stakeholder that will be most affected by Africa’s educational challenges.

While UNESCO predicts that Africa will soon be home to 50% of the world’s illiterate population, Maria Ramos, Chief Executive of Barclays Africa Group, points to the focus of governments and businesses on creating real improvements through training programmes and scholarships.

“We must make sure that governments remain focused on funding and investing in education and skills improvement, and that they encourage partnerships with donors, business and local communities,” she says.

But given Africa’s rapid increase in mobile phone users – 40-fold since 2000 – it is clear that technology will play a fundamental role. Ramos points to Ghana’s Open Learning Exchange which looks at innovative teaching and learning models, as well as South African experiments with digitizing the curricula and making it available on tablets.

“Apart from the fact that you take away a lot of logistics costs associated with it, mobile technology makes education accessible to young learners in remote parts of the country. It also addresses concerns about the quality of educators because you can upskill teachers quickly and provide them with ongoing support through a range of online platforms. 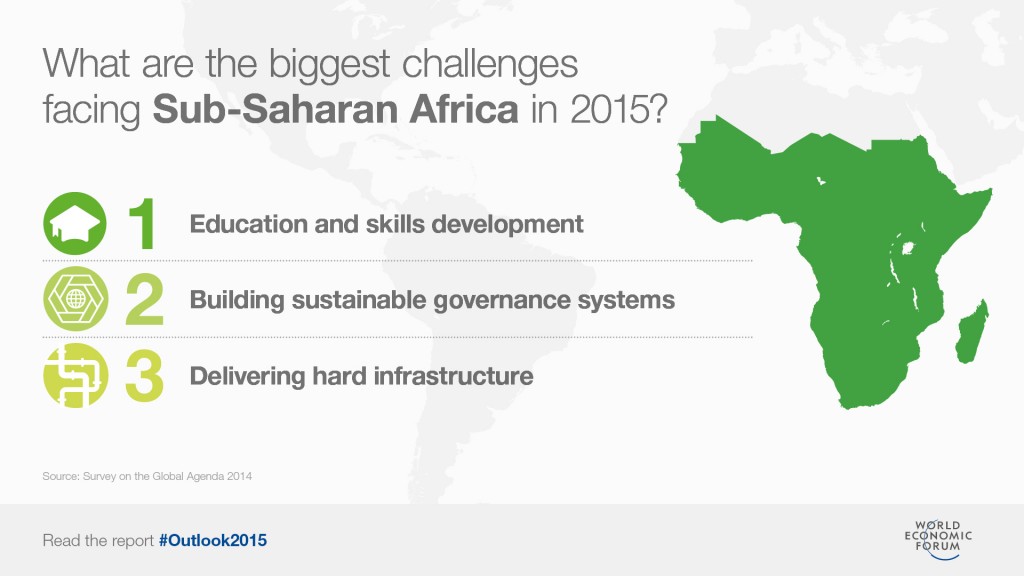 Education isn’t the only area where African leaders must engage with their people.

Ramos highlights the significant improvements in “governance, fiscal management, macroeconomic management and greater accountability” made in countries like Rwanda. She says accountability remains the biggest obstacle to developing appropriate governance. “When you limit democracy and you have a lack of accountability to citizens, you undermine the basic principles that facilitate economic development and ensure broad political stability.”

While investment in human capital is critical, the need to address the infrastructure deficit is equally important.

Africa is facing infrastructural challenges – not least with regards to the provision of energy – that have an impact on economic development. Countries including Kenya, Tanzania, Nigeria, Ghana, South Africa and Ethiopia have made significant progress in both the renewable and non-renewable energy sectors, but growth and development can only be sustainable with additional targeted investments. And yet the results of this year’s Survey show pessimism around this issue. Almost 40% of respondents doubted that Africa’s infrastructural problems would be dealt with in a meaningful way in the near to mid-term future.

More optimistic observers point to the fact that the build-up of infrastructure is supported through foreign direct investments and trade with other emerging economies – such as the record $200 billion China-Africa trade flows – and agencies such as the African Development Bank and the World Bank. But for Ramos, a significant development is that regional and local investors are starting to chip in. This also helps to shift from traditional investments based on the extraction of natural resources to more “strategic investments focused on a broader set of development opportunities and long term sustainability”.

This article was written for the World Economic Forum’s Outlook on the Global Agenda 2015 report, based on an interview with Maria Ramos.

Image: Students share a desk during a mathematics class at the Every Nation Academy private school in the city of Makeni in Sierra Leone, April 20, 2012. REUTERS/Finbarr O’Reilly

These are 2021’s most innovative companies

The businesses that are recovering more quickly from the pandemic not only prioritize innovation, but ensure that the necessary systems, leadership and processes are in place.

Scientists at Purdue University in the US say they’ve created an ultra-white paint that can cool buildings by reflecting up to 98% of sunlight.

5 ways to reduce risk while fuelling IT innovation and growth