Why millennials will lead the fight against corruption

Corruption is an important obstacle to political and economic development, and to a better future. It is a global infection with no boundaries, and fighting corruption requires a global perspective on local actions. The voices of the millennials are especially important in this regard, as youth are less interested in maintaining the status quo and are agents of change. The International Student Festival in Trondheim (ISFiT) is founded on this principle: to establish a forum where students from around the world can exchange ideas for a better future. We’ve gathered their stories about corruption, and – take a look – it’s everywhere.

A story from Zimbabwe describes how the author (aged 17) almost died in childbirth because of corruption. Although the author had paid the hospital fees, the doctor explained that he would “never see a cent of that money”. Together with the other 8,240 doctors and nurses all over the country, the doctor was on strike. “Money meant for salaries and maintenance of health facilities is corruptly abused by government officials,” the author writes. The author was one of the lucky ones, and was saved by two people that helped her deliver her baby safely, but she writes that due to the amount of corruption in the government, health facilities have become a death trap. 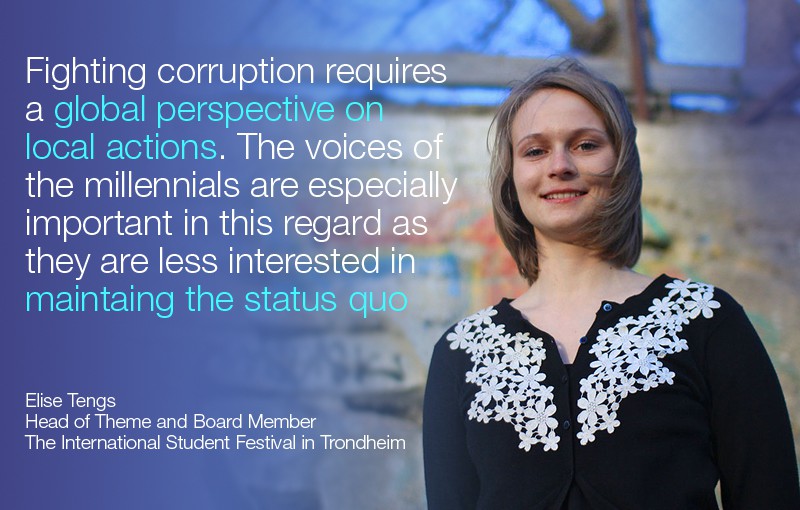 Stories from Europe and Asia tell about demands for bribes to obtain drivers’ licences. This is directly about physical security. In Belarus a doctor would not give a patient the treatment he needed. “He told me that he knew an effective treatment of my illness, but for accelerating the process I should have paid extra.” In Peru a woman with cancer didn’t get the needles she needed to receive chemotherapy because the nurses in the hospital had stolen them so that the patients had to pay for them instead. Corruption is a global infection. Respondents in a recent survey of millennial-aged networks all said that corruption hits key institutions in society.

Turning back to the stories we’ve gathered, we learn of the realities behind these perspectives. From Côte d’Ivoire one story explains how getting a job no longer is a question of competence but of network and money. “The one that offers the most money is the smartest and it is he who gets the job,” the author writes. The quality of service in public administration is deeply flawed because it selects people who do not deserve their positions. A story from Indonesia tells about the country’s budget state, where education, aid, welfare assistance and medical assistance are all corrupted, in addition to the tax payment. In Mexico a young teacher no longer trusts the police after being stopped on her way to work and asked to pay money to proceed further. In Azerbaijan, money given to improve the quality of education was never used in this regard.

Bringing together these voices to exchange ideas is an important contribution to the global fight against corruption. However, the focus should not be on the individuals but on the corrupt system itself. More importantly, the focus should be on the solutions. We need to create a constructive debate and dialogue across ideological and national borders.

We call on everyone from local government officials to international decision-makers to listen to the voice of the millennials. We see many international organizations engaging millennial voices more often when global issues are on the agenda. The next step should be to implement these ideas in the decision-making processes, so that youth can have a say in their own future.

Today’s generation of youth is the largest ever, and makes up 1.8 billion leaders of tomorrow. Their engagement and ideas are key to our success.

The full results of the survey, The Impact of Corruption: Perspectives from Millennial Voices, are available here.

Author: Elise Tengs, Head of Theme and Board Member, the International Student Festival in Trondheim.