5 steps for Italy to boost growth

Two interesting institutional documents were released over the past 10 days: the Going for Growth 2015 of the OECD and the Winter Economic Forecast of the European Commission. A combined reading suggests that a) there is (ample) scope for Italy to step up its reform efforts, and b) the time might be ripe to do so.

The leitmotif underpinning this year’s OECD report is the concern that following a “facilitating effect of crises”[1], which seems to have pushed advanced economies into enacting painful competitiveness-enhancing measures, the pace and breadth of reform is now slowing down. In order to illustrate the point, the Paris-based organisation put together a Reform responsiveness rate indicator[2], which estimates the share of OECD country-specific recommendations on which “significant action” was taken by a government. In a nutshell, a value of 0.5 indicates that significant actions were taken on half of the reform priorities identified by the OECD in the previous year.

Figure 1 above benchmarks this reform effort indicator in the midst of the crisis (x-axis), with its latest value (y-axis).

Programme countries were leading the reform effort spectrum in the midst of the crisis (2011-12), together with Estonia and Spain. Since then, reform drive has slowed down sharply, tugging most of them in line with (or below) the EU average. Greece was, and confirms to be, a reform leader by OECD standards, in line with what I argued recently here.

When compared to other stressed countries, Italy was less of a reform leader during times of crisis, exerting levels of reform aligned with the UK and Denmark. The latter two, however, were among the most competitive economies in the world already at that time. Moreover, in the last two years, as financial instability waned but political instability mounted[3], Italy has reduced its reform efforts more than any other OECD EU country except Ireland and Estonia.

As a result, Italy’s competitiveness is slipping with respect to its European partners. Figure 2 below shows the change in the World Bank Ease of Doing Business ranking over the same period of time as the OECD data presented above. As expected, Italy has been improving its non-price competitiveness somewhat, but less so than Greece and Spain. Ireland and Portugal were already faring quite well in terms of this indicator in 2011-12. Consequentially, Italy is now among the places in Europe with the largest number of obstacles for new businesses.

This is not a peculiarity of the Doing Business data. The trend is confirmed also by other competitiveness indicators.

For the sub-sample of euro area countries presented above, the World Economic Forum places Italy’s competitiveness levels just ahead of Greece and below Portugal and Spain. This is true also when looking at the OECD’s indicator of Barriers to Trade and Investment, strictness of Employment Protection Legislation, and strictness of Retail Trade Regulation to boot.

A first line of conclusions can hence be drawn: Italy might have partially stepped up its reform efforts in the darkest stage of the euro area crisis, but starting from low levels and less so than countries in a similar need of an economic overhaul. Since then, this moderate reform drive has partially faded, resulting in slipping competitiveness with respect to other stressed countries. Further efforts are surely warranted, as Italy is now faring poorly vis-à-vis its European partners according to several competitiveness indicators.

Hints of why a reform window might be opening for Italy is to be found in the Commission’s latest forecast report. As can be seen in Figure 3 below, for the first time since the financial crisis hit, Italy is forecast to grow from 2015Q1 in a sustained fashion for 8 consecutive quarters. These positive prints, which are echoed by private forecasters, the IMF, and the Bank of Italy, come off the back of two main elements: a) lower oil prices, which my colleague Jim O’Neill has recently paralleled to a sharp tax cut for consumers, and b) the strong effects of a weak euro on an exporting country like Italy, as discussed inter alia by finance minister Padoan in Istanbul earlier last week. 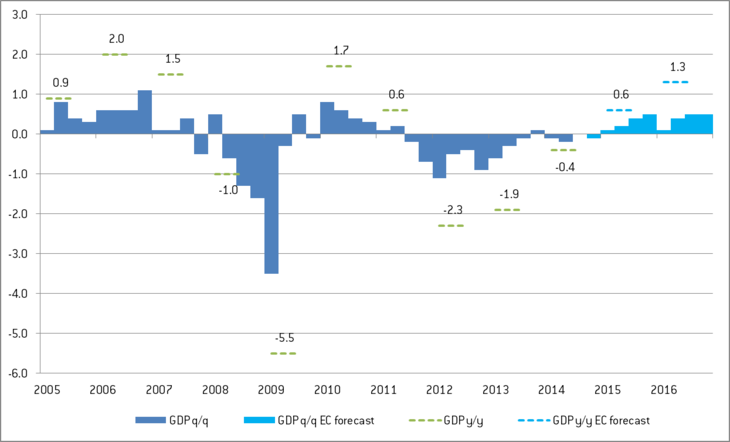 In other words, Italy (like other European countries) is entering a period of loose monetary policy and something that resembles an expansionary fiscal policy shock. These, OECD (2009) analysissuggests, are the best conditions to implement structural reforms, as their short-term negative impact will be cushioned by an expanding aggregate demand.

Political economy considerations might also corroborate a call for reforms. Discussing broad-based reform episodes in Europe, Dani Rodrik (1994) underlined the “importance of demonstrating early success in some key dimensions of reform” in order to endow “the broader reform programmes with legitimacy”. Extrapolating this principle to the Italian situation, Prime Minister Matteo Renzi should take full advantage of this mild economic rebound, which could suggest reforms are working. This will also make it harder for the oppositions to contrast the reform agenda, Rodrik suggests.

Up until now, the government has focused its economic reform efforts on liberalising the Italian labour market through the so-called Jobs Act. On this, the jury is still out, as its implementing decrees are still being drafted. Moreover, the Renzi government seems now set to restructure the banking sector, whose weaknesses have been exposed by the ECB’s asset quality review.

However, more can be done to tackle precisely those areas where Italy compares particularly poorly by international standards: 1) shifting taxation away from labour, as Italy’s tax wedge is currently the 5th highest in Europe and 12 p.p. above the OECD average; 2) abridging the length of judicial procedure, for which Italy is 147th worldwide in the World Bank ranking; 3) simplifying the tax system, which is estimated to take start-ups 296 hour/year to comply with (in France it’s 132); 4)easing the entry/exit of firms, particularly in retail trade; 5) restructuring and privatising state-owned enterprises, for which Italy ranks 3rd in the OECD[4] in terms of number of employees (289’329 considering only SOEs controlled by the central government).

After three years of negative growth, cyclical indicators suggest Italy’s economy might be slowly re-starting. However, this is rooted in external factors and a monetary boost to aggregate demand, which was needed to shore off against deflationary tendencies in the euro area. The challenge for Renzi’s government will be to take full advantage of these positive temporary factors to lay the foundations of more durable growth.

[2] The reform responsiveness rate indicator is based on a scoring system in which recommendations set in the previous year’s issue of Going for Growth take a value of one if “significant” action is taken and zero if not. An action is considered as “significant” if the associated reform addresses the underlying policy recommendation and if it is actually legislated: announced reforms are not taken into account (OECD, 2015).

This article was originally published on Bruegel Blog. Publication does not imply endorsement of views by the World Economic Forum.

These countries think capitalism does more harm than good

This region will be worth $5.6 trillion within 5 years - but only if it accelerates its policy reforms

Female leadership on U.S. company boards is rising - but far too slowly

Here's what a new study tells us about fairness and inequality