What kind of financial shocks caused the Great Recession?

The financial turmoil experienced over the last decade has led to a renewed interest in the effect of financial disturbances on the real economy. A growing body of literature documents how financial shocks can impulse business cycle movements, while it was commonly accepted that financial frictions mostly amplify cycles (e.g. Jermann and Quadrini 2012, or Christiano et al. 2014). These shocks emerge from the financial sector and can take several forms, such as debt, risk, or stock price shocks. In a recent paper (Bacchetta et al. 2014), we argue that the evolution of corporate cash reserves can potentially shed some light on the nature of financial shocks.

It is interesting to observe that in the US employment comoves negatively with the corporate cash ratio, measured as the share of liquid assets in total assets. Figure 1 shows that this negative relationship is particularly striking for the Great Recession, since the corporate liquidity ratio experienced a large boom from 2009 while employment has been strongly depressed.

Notes: The cash ratio, measured as the share of corporate liquidity in total assets, is built from the US Flow of Funds (non-farm non-financial corporate sector). We define liquidity as the sum of private foreign deposits, checkable deposits and currency, total time and savings deposits, and money market mutual fund shares. Corporate employment in logarithm is drawn from the Bureau of Labor Statistics. Both quarterly variables are Hodrick–Prescott filtered.

What does the comovement mean?

This negative relationship between the corporate cash ratio and employment may at first appear surprising and raises several questions. To what extent are firms’ cash and employment decisions related? Can decisions on cash reserves provide information on the financial constraints faced by firms?

We argue that the distinction between liquidity and credit shocks is a primary step to address these questions. The so-called credit shock usually refers to changes in long-term (or less liquid) borrowing. However, firms’ operations are also affected by short-term liquidity. A negative liquidity shock can thus be interpreted as a shortage of short-term borrowing such as credit lines or trade credits, or other forms of external liquidity like trade receivables to customers, or other types of payments. On the one hand, cash management decisions are partly driven by a tightening in financing conditions, especially those affecting the availability of external liquid funds. On the other hand, cash holding is related to employment, simply because liquid assets facilitate the firm’s ability to pay for the wage bill. Based on these facts, liquidity shocks can explain a negative correlation between the corporate cash ratio and employment. This underlies the crucial role played by the tightening of liquidity conditions in the aftermath of the Lehman crisis. While no initial sharp reduction in credit supply was observed at the onset of the recent financial crisis, firms experienced a significant deterioration in their expected liquidity conditions. Gilchrist and Zakrajsek (2012) also argue that banks cut the existing corporate lines of credit during the crisis.

The optimal choice of corporate liquidity is rarely introduced in macroeconomic models, even in models with financial frictions. Liquid assets are usually held by households, typically in the form of money, to finance their consumption. However, firms also have liquidity needs. Papers incorporating firms’ liquidity are typically in the spirit of Holmstrom and Tirole (2011) and Woodford (1990).

The theoretical framework built in Bacchetta et al. (2014) includes corporate cash holdings and employment. It gives a subtle view of financial shocks, by disentangling the role of liquidity shocks and credit shocks. This distinction is made possible by assuming that firms are credit constrained on both markets, namely the markets for liquid and illiquid funds.

Liquidity shocks appear to be crucial to explain the negative relationship between these two variables. A reduction in external liquidity generates two effects. On the one hand, lower liquidity reduces the financial opportunities of firms and depresses labour demand. On the other hand, the reduction in external liquidity makes the production process more intensive in cash to ensure that wages are fully financed. Firms’ assets are then tilted towards cash. Combining these two effects implies that the cash ratio increases while employment declines. A credit shock also tightens financial conditions and discourages employment. However, since it does not directly affect the structure of the portfolio between internal and external liquidity, it barely affects the cash ratio. Interestingly, the typical technology shock is not a good candidate to explain the negative relationship between employment and the corporate cash ratio. Indeed, a decline in productivity improves firms’ ability to obtain short-term loans (through a positive collateral effect), which generates a slight reduction in the cash ratio while employment is reduced.

A natural exercise is to assess the relative contribution of financial shocks (credit and liquidity shocks) to the business cycle. The theoretical model can be used to recover credit, liquidity, and technology series over time, as shown in Figure 2. 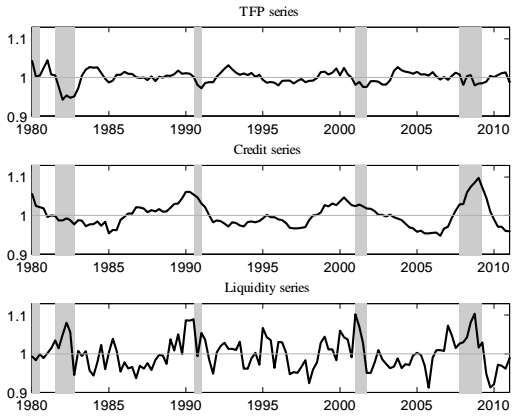 Note: The TFP, credit, and liquidity series are computed from the theoretical setup in Bacchetta et al. (2014).

Liquidity and credit shocks are not correlated, which suggests that they are of a different nature to one another. Interestingly, liquidity shocks generate the bulk of short-term fluctuations, while credit shocks are more important in the medium term. In addition, both financial shocks are more volatile than productivity. Our model predicts that the Great Recession was mostly driven by financial shocks, i.e. liquidity and credit shocks, rather than a technology shock. This latter result is in line with Jermann and Quadrini (2012) who construct a generic financial shock. As shown in Figure 1, the negative comovement between cash and employment was particularly pronounced during the financial crisis, confirming that liquidity shocks are key drivers of the recession.1

There is also significant heterogeneity in firms’ cash behaviour. To capture the cross-firm dimension, we assume that firms are hit by idiosyncratic productivity and liquidity shocks. The model is parameterised using moments’ distribution from firm-level data. Despite its simplicity, the model performs relatively well quantitatively in reproducing the negative cross-firm correlation between the cash ratio and employment.

We stress a negative comovement between the corporate cash ratio and employment which can be explained by (external) liquidity shocks. These shocks make production less attractive or more difficult to finance, while they also generate a need for internal liquidity necessary to pay wage bills, which can be satisfied by holding more cash. The combination of long-term credit and liquidity shocks has substantially contributed to the Great Recession.

Holmstrom, B and J Tirole (2011), Inside and Outside Liquidity, MIT Press.

1 Kiyotaki and Moore (2012) also analyse liquidity shocks, although they refers to the abilities of firms to issue equity. Del Negro et al. (2011) argue that liquidity facilities provided by the Federal Reserve during the Great Recession dampened the recession. However, their measure of liquidity consists of all liabilities of the federal government, while we focus on corporate short-term borrowing.

Image: U.S. one dollar bills blow in the wind. During financial shocks, liquid cash can become a boon, affecting other areas of investment. REUTERS/Marcelo Del Pozo

Many workplaces have already experimented with different types of working arrangements, but what steps can companies take to implement it?

Research suggests that acute bouts of physical activity (such as walking or running) can have a positive effect on concentration, particularly in young people.

5 ways work could change for the better in 2021