Neuromorphic technology is one of 10 emerging technologies for 2015 highlighted by the World Economic Forum’s Meta-Council on Emerging Technologies.

Even today’s best supercomputers cannot rival the sophistication of the human brain. Computers are linear, moving data back and forth between memory chips and a central processor over a high-speed backbone. The brain, on the other hand, is fully interconnected, with logic and memory intimately cross-linked at billions of times the density and diversity of that found in a modern computer. Neuromorphic chips aim to process information in a fundamentally different way from traditional hardware, mimicking the brain’s architecture to deliver a huge increase in a computer’s thinking and responding power.

Miniaturization has delivered massive increases in conventional computing power over the years, but the bottleneck of shifting data constantly between stored memory and central processors uses large amounts of energy and creates unwanted heat, limiting further improvements. In contrast, neuromorphic chips can be more energy efficient and powerful, combining data-storage and data-processing components into the same interconnected modules. In this sense, the system copies the networked neurons that, in their billions, make up the human brain. 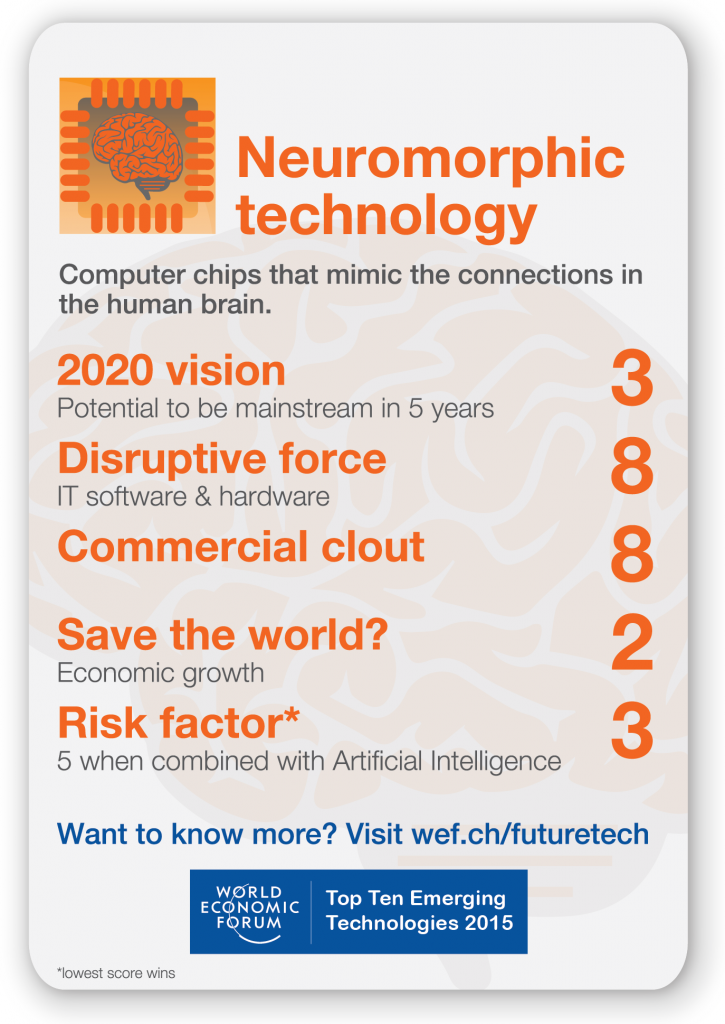 Neuromorphic technology will be the next stage in powerful computing, enabling vastly more rapid processing of data and a better capacity for machine learning. IBM’s million-neuron TrueNorth chip, revealed in prototype in August 2014, has a power efficiency for certain tasks that is hundreds of times superior to a conventional CPU (Central Processing Unit), and more comparable for the first time to the human cortex. With vastly more compute power available for far less energy and volume, neuromorphic chips should allow more intelligent small-scale machines to drive the next stage in miniaturization and artificial intelligence.

Potential applications include: drones better able to process and respond to visual cues, much more powerful and intelligent cameras and smartphones, and data-crunching on a scale that may help unlock the secrets of financial markets or climate forecasting. Computers will be able to anticipate and learn, rather than merely respond in pre-programmed ways.

The social innovators of 2022 are building trust and supporting millions

Together with the winners of 2019 and 2020, the Schwab Foundation's 2022 awardees have impacted the lives of 100 million people worldwide through trust.

This is how 15 leaders are changing the world through trust

How social innovators have improved the lives of over 722 million

Meaningful conversations can transform our world, here’s how

How investing in social impact networks can spur innovation and change