‘Sense and avoid’ drones are one of 10 emerging technologies for 2015 highlighted by the World Economic Forum’s Meta-Council on Emerging Technologies.

Unmanned aerial vehicles, or drones, have become an important and controversial part of military capacity in recent years. They are also used in agriculture, for filming and multiple other applications that require cheap and extensive aerial surveillance. But so far all these drones have had human pilots; the difference is that their pilots are on the ground and fly the aircraft remotely.

The next step with drone technology is to develop machines that fly themselves, opening them up to a wider range of applications. For this to happen, drones must be able to sense and respond to their local environment, altering their height and flying trajectory in order to avoid colliding with other objects in their path. In nature, birds, fish and insects can all congregate in swarms, each animal responding to its neighbour almost instantaneously to allow the swarm to fly or swim as a single unit. Drones can emulate this.

With reliable autonomy and collision avoidance, drones can begin to take on tasks too dangerous or remote for humans to carry out: checking electric power lines, for example, or delivering medical supplies in an emergency. Drone delivery machines will be able to find the best route to their destination, and take into account other flying vehicles and obstacles. In agriculture, autonomous drones can collect and process vast amounts of visual data from the air, allowing precise and efficient use of inputs such as fertilizer and irrigation.

In January 2014, Intel and Ascending Technologies showcased prototype multi-copter drones that could navigate an on-stage obstacle course and automatically avoid people who walked into their path. The machines use Intel’s RealSense camera module, which weighs just 8g and is less than 4mm thick. This level of collision avoidance will usher in a future of shared airspace, with many drones flying in proximity to humans and operating in and near the built environment to perform a multitude of tasks. Drones are essentially robots operating in three, rather than two, dimensions; advances in next-generation robotics technology will accelerate this trend. 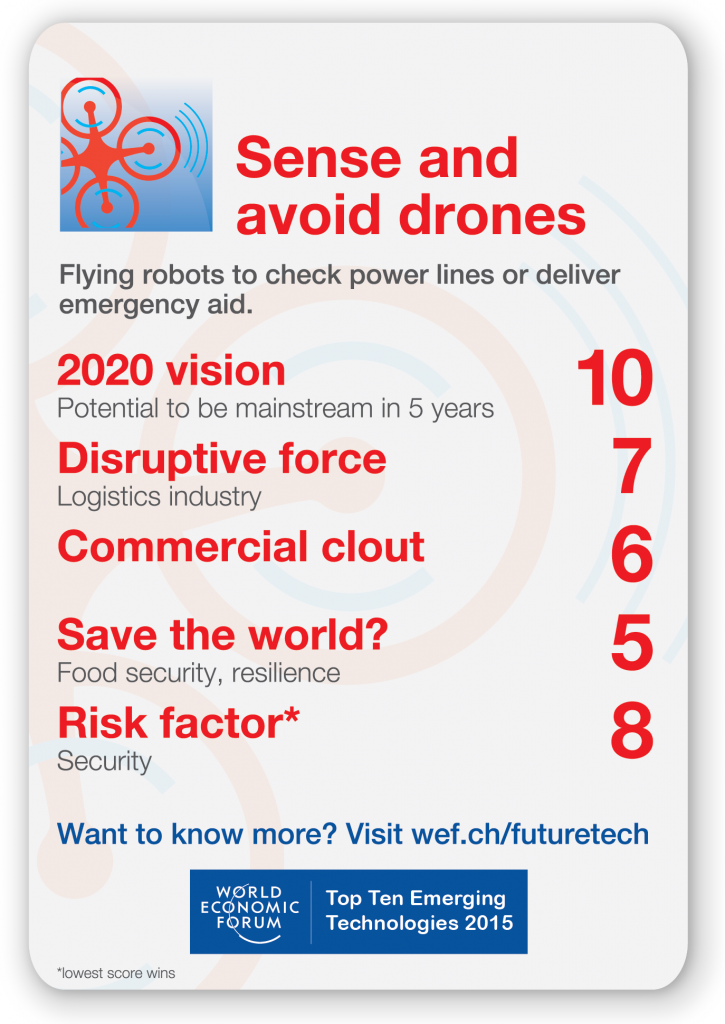 Flying vehicles will never be risk-free, whether operated by humans or as intelligent machines. For widespread adoption, sense and avoid drones must be able to operate reliably in the most difficult conditions: at night, in blizzards or dust storms. Unlike our current digital mobile devices (which are actually immobile, since we have to carry them around), drones will be transformational as they are self-mobile and have the capacity of flying in the three-dimensional world that is beyond our direct human reach. Once ubiquitous, they will vastly expand our presence, productivity and human experience.

Image: An airplane flies over a drone during the Polar Bear Plunge on Coney Island in the Brooklyn borough of New York January 1, 2015. REUTERS/Carlo Allegri

Doomscrolling: How can we manage the growing addiction to negative news?

'Doomscrolling' is a term used to describe the concept of binging on negative news, a behaviour that has been found to be increasingly common.

Can you trust your AI assistant? A worker's guide to predictions, decisions and collaboration

Researchers have developed a technique, designed to help people better understand when to trust an AI agent.

This is the state of AI in 2022, according to three experts

Predictions 2022: Business leaders on how can we ensure a safe and equitable digital transformation