How to encourage women into the workforce

Faced with the rapidly ageing population, increasing women’s labour force participation has become an essential pillar of the government’s reform programme in both Japan and Korea.

Yet, balancing work and family remains a paramount challenge for women, not only in advanced Asian countries but around the world. Although female labour force participation has been on a rising trend, it still falls considerably short of the average of advanced OECD countries. There are also too few women who take up leadership positions in business and politics in Japan and Korea. As a result, Japan and Korea are lagging in the gender gap indexes, ranking 104th and 117th out of 136 countries studied in the World Economic Forum’s Global Gender Gap Report 2014 (World Economic Forum 2014).

The Nordic countries’ experiences – Finland and Norway—can shed light on this issue. They too faced the demographic challenge of shrinking working-age population and low female labour force participation in the 1960s. They have since implemented various public policies ranging from comprehensive parental provision and childcare facilities to statutory right to paternal paid leave. As a result, they have become global forerunners in gender equality. 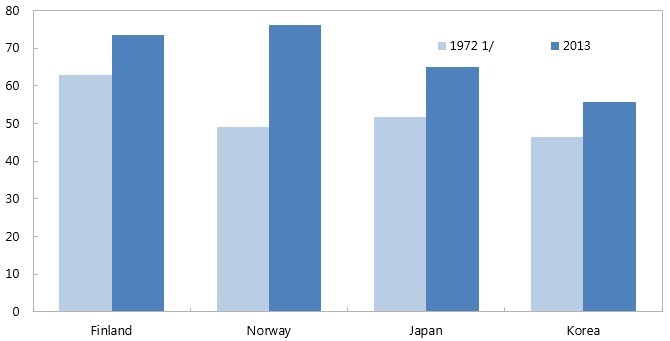 M-shaped pattern of female labour in Japan and Korea

More than half of the total female labour force in Japan and Korea is in low-paid non-regular employment with a low chance of career progression. This is partly because women in Japan and Korea often drop out of the labour force at a prime time in their working lives when they get married and have children. They return to work only after childbearing as non-regular employees. This tendency is reflected in the M-shaped employment pattern over a woman’s life. This contrasts with the smooth U-shaped pattern found in Finland and Norway – women remain on the job throughout their childbearing period.

Figure 2. Employment throughout ages for men and women

The Nordic countries have not only increased the number of working women in the past few decades, but this has also led women to having more children. The relationship between fertility and female labour force participation rates indeed turned from negative to positive since 1985 as seen in the cross-country data (Brewster and Rindfuss 2000, Yamaguchi 2006). This shift over time implies that the substitution effect between having children and working has more recently been offset by the income effect. Higher female labour participation allows households to have more children. This reflects changes in social norms toward working mothers and also the public policies that reduce the trade-off between childbearing and female employment. These policies include more generous parental leave, greater availability of childcare and greater opportunities with flexible working hours (Del Boca et al. 2003).

It is very important to make a distinction between types of employment – non-regular and regular – in assessing the factors female employment as different shocks affect them asymmetrically. Our empirical results from a structured vector autoregressive (SVAR) model suggest that child cash allowances and persistent gender wage gaps have a negative impact on the number of women in regular employment, while they affect non-regular female employment positively. A higher proportion of regular female employment is, in turn, associated with higher fertility rates because of full benefits and job security. This pattern mimics the pattern observed for female labour force participation in Nordic countries. Thus, encouraging more women to work as regular workers in Japan and Korea would help alleviate the declining trend in fertility.

The other factors that can explain female labour force participation include availability of affordable childcare services, promotion of work-life balance, and paternal involvement in childrearing. In Japan and Korea, public childcare services for children aged 6-11 drop to nearly zero while Finland and Norway continue to devote 24 and 15% of total childcare provision to this age group, respectively. A part of public spending on family benefits is in the form of tax breaks in Japan and Korea, while there is very little in Nordic countries.

Paternal involvement in childrearing and flexible work arrangements are also notable in Nordic countries compared to in Japan and Korea. This helps women continue their careers after childbirth and indirectly promotes higher fertility rates.

Increasing female labour force participation is important for economic growth in Japan and Korea to counter acute labour shortages amid the demographic challenges. Given the labour market duality in these countries, it is also key to focus on public policies to shift more women from non-regular employment to regular employment, including providing less child cash allowances and more affordable childcare services. As the Nordic experiences show, more women would be likely to remain in the work force if they were in full-time jobs with all the associated benefits and would likely to have more children.

The private sector also has a part to play in encouraging more women to remain in the work force. Business communities and society as a whole should be open to creating more flexible work environments, promoting work-life balance and diversity, and boosting female representation in management.

Disclaimer: This column is based on “What can boost female labour force participation in Asia?” (IMF Working Paper 15/56). The views expressed in this paper are those of the authors alone and do not necessarily represent those of the IMF or IMF policy.

Yamaguchi, K (2006), “On the true relationship between female labour force participation and fertility rate: An analysis of OECD countries and its policy implications”.  MEITI Journal 2006(4): 58-61.

Author: Fang Guo is Assistant Professor at the Department of International Economics, School of Business, Hubei University. Yuko Kinoshita is an economist at International Monetary Fund.

Emerging Asia faces a post-COVID inequality trap. Here's how to avoid it

Emerging Asia is in danger of falling into an inequality trap as it recovers from the pandemic. Here are 3 ways authorities can restore some balance.

Davos 2022: What role will 'ASEAN' play in a shifting geopolitical landscape?

All eyes will be on ASEAN this year as it hosts several global summits, including the G20 in Indonesia. The region has a critical role to play in tackling global problems.