Do structural reforms only pay off in the long term?

Professor Nicholas Barr of LSE used to kick off his public economics lectures by illustrating cases of what he facetiously named ‘pub economics’, defined as something that everyone knows to be true, but is not. In his lectures, examples of these misconceptions were the notion that free university education would unequivocally lead to improved access for students, or that increasing the retirement age would negatively affect (youth) unemployment.

Within the current European context, we might be observing a display of pub economics also for what concerns structural reforms. After over 7 years of crisis, everybody – ranging from politicians to policy-makers, including the press[1] – seems to know that structural reforms might well be beneficial for long-term growth, but have a dragging effect in the short-run[2]. However, is this really the case? As Rodrik (1996) neatly puts it, “for a proposition that is startlingly lacking in empirical support, [this] piece of conventional wisdom is surprisingly strongly held”.

The recent available analysis on Europe actually points in the opposite direction. Making use of its in-house structural model of the world economy, IMF (2012) shows how the potential gains from reform in the euro area are large and materialise prevalently in the longer term. However, the impact is expected to be positive also in the short-run for all reforms considered (see Figure 1). Similar predictions are made by ECB (2015), which makes use of its EAGLE multi-country micro-founded model to show the impact of product and labour market reforms. “The positive impacts of reforms on GDP can already be observed in the first year”, the ECB concludes. Making use of DG ECFIN’s QUEST model, European Commission (2013) does not find detrimental short-term effects of reforms on GDP or employment in selected euro area countries[3], with the possible exception of Greece, where they appear to be marginally negative. Finally, drawing on empirical analysis of 30 years of reform in OECD countries,OECD (2012) echoes all the above for what concerns the impact of product market, labour market, and tax reforms on employment and GDP.

Figure 1. Short- and long-term impact of reforms in the euro area on GDP level (%)

As multiple mechanisms are at play when it comes to reforms, it is important to understand the channels through which competitiveness-enhancing measures can affect growth in the short term. Figure 2 (below) offers an overview of the main channels identified by the literature[4].

The crucial takeaway is that reforms – either directly through business restructuring and temporary layoffs, or indirectly through the real interest rate – are indeed expected to dampen consumption. However, a counter effect is expected to stem from a boost in short-term investment based on prospects for higher productivity, real wages, and incomes in the future. The key issue is which set of forces prevails.

As shown above, under a wide range of assumptions and estimation techniques, it seems reasonable to expect that the pick-up in investment and, to a smaller degree, an expanding current account will more than off-set the adverse dynamics of consumption, refuting the “short-term pain before long-term gain” principle at aggregate level. This however does not imply that individual categories will not be severely affected by policy changes, and hence the complexity of the politics of reform adoption (see Williamson, 1994). 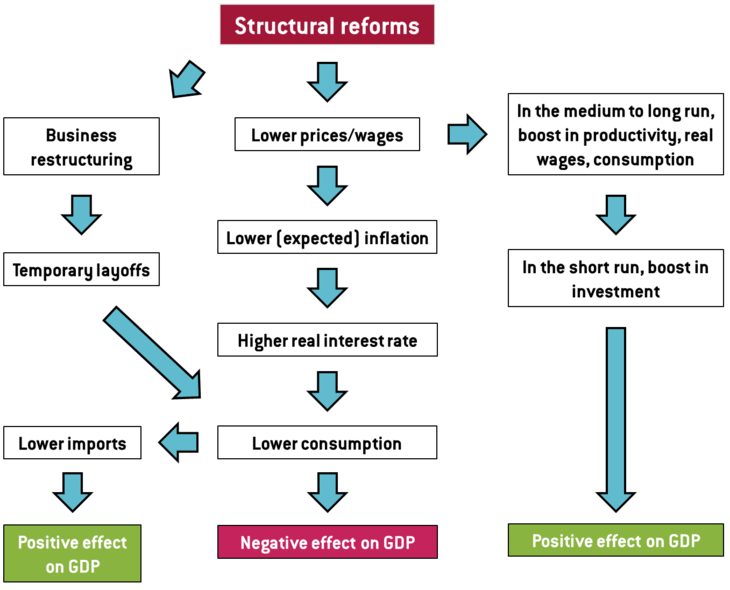 With this theoretical framework in mind, three key observations can be made:

1. Sequencing and packaging of reforms. Cutting red tape, abolishing state monopolies, reducing EPL, liberalising shop opening hours can all be expected to affect consumption and investment decisions in different ways and with different time horizons. In particular, revenue-neutral tax reforms reducing distortions among factors of production are expected to benefit growth straight away (see Figure 1 and IMF, 2004). On the other hand, selected labour market reforms may be marginally detrimental to short-term growth, particularly in severely depressed economies (see OECD, 2012). This heterogeneity offers scope for optimal sequencing and packaging of reforms, as argued inter alia by Cacciatore et al. (2012) and IMF (2006).

2. The centrality of access to credit. Unlocking investment is crucial to the immediate success of structural reforms. As such, functioning bank lending channels and credit markets are a key precondition for reforms to unlock growth from the onset. With this in mind, ensuring the soundness of the financial system and SMEs access to credit should be prioritised against other structural reforms, if the latter are to pay off quickly.

3. The role of fiscal policy. The absence of major depressing effects does not support the view that reforms can only be implemented if accompanied by substantial fiscal expansion, as acknowledged byOECD (2012). This becomes particularly crucial in the current discussions about the euro area fiscal framework, and whether there is a need to exchange fiscal flexibility for reforms. Given the heterogeneous distribution of benefits, fiscal policy may retain a role to ensure fairness in the transition to a new steady state and might be needed to overcome resistance to reform, when losers can easily be identified.  These objectives could however also be reached by strategically packaging reforms, as argued by Cœuré (2014).

The sceptical reader might wonder why one should pay so much attention to the short-term effect of structural reforms, given they are widely acknowledged by the literature to be beneficial in the long run, and that should suffice. Going beyond the evergreen reference to Keynes’ renowned ‘in the long run we are all dead’, the political economy of reform should not be easily dismissed, as I have arguedbefore. Rodrik (1994) explains how it is fundamental to demonstrate early success of reform in order to garner the public consensus necessary to sustain broader reform programmes over multiple years. And an economy cannot be overhauled overnight, as shown by Williamson (1994).

Understanding the dynamics and time profile of structural reforms may ultimately increase the political feasibility of reform packages, while also enhancing their fairness at a time of limited fiscal space for many European countries.

[2] Throughout this contribution, short-term is defined as the first year following a policy change.

[4] Clearly, one can picture several other channels. For example, the compression of wages/prices is expected to lead to a boost in exports. This will benefit a country’s current account and GDP. However, DSGE model estimations suggest this effect to be limited in the short term (see ECB, 2015).

Image: A man walks past buildings at the central business district of Singapore February 14, 2007. REUTERS/Nicky Loh.