Lessons for Greece from the 1982 Mexican debt crisis

In 1982 Mexico suffered a huge external shock. The price of oil – its major export – fell 65% between 1981 and 1986. Simultaneously, world interest rates surpassed 15%, making debt repayment impossible (Oks and van Wijnbergen 1994). Unlike Greece, Mexico received neither a bailout nor a debt-haircut at the beginning of its crisis. To rub salt in the wound, IMF funding stopped in 1985, right after a massive 8.1 magnitude earthquake stuck Mexico.1

Mexico’s external debt haircut – the Brady Plan – happened seven years after the onset of the crisis, and only after Mexico made permanent structural reforms while continuously servicing its debt.

Obviously, it would have been optimal for both the Mexican debt haircut and structural reforms to have occurred in 1982, and for Mexico to have received a bailout to smooth consumption during the rocky 1980s. Unfortunately this is not how the world works. In the late 1970s, Mexico had the time and the oil revenues to implement necessary structural reforms. Power-holders blocked attempts to reform during those good times.

The deep fiscal crisis and the lack of leniency from international organisations forced Mexican power-holders to have an ‘internal conversation’ on whether to become a liberalised economy or a statist economy. The outcome of such heated conversation was a radical trade liberalisation and privatisation program. Such decisions were politically difficult – they led to a deep political rift that ended in the breakup of the Institutional Revolutionary Party (PRI)’s long-lived hold on power.

We can capture the size of the negative external shock in two complementary ways:

An economy-wide indicator of the adjustment to the external shock is the current account, which measures the excess of national income over national spending. Figure 6 shows that in 1982 Mexico’s current account improved by a whopping 8% of GDP as it jumped from a -6% deficit in 1981 to a +2% surplus, and had a cumulative 5% surplus from 1983 to 1988. In contrast, Greece’s current account remained in deficit from 2008 until 2012. From 2008 to 2014 the cumulative current account deficit was 47% of GDP.2

The fiscal response lays behind the different current account responses. Figure 7 exhibits the primary fiscal balance, which excludes debt service. Despite a sharp recession, Mexico’s primary fiscal balance improved 13 percentage points from a deficit of 8% of GDP in 1981 to a 5% surplus in 1983. This surplus remained until the Brady plan was implemented. In contrast, between 2008 and 2013 Greece ran a primary fiscal deficit (6% of GDP on average). It reached a surplus of 2% of GDP in 2014.

How could Greece run a current account deficit in the face of huge private capital outflows? As we can see in Figure 8, the answer is given by the remarkable jump in public capital inflows, which is roughly equal to the current account deficit plus private capital outflows.3 The public capital inflows include disbursements under the IMF/EU programs and the EU bailouts of 2010 and 2011. They also include the increase in credit from the ECB to the Bank of Greece via the Target2 balances.4

Sources: Eurostat and OECD, and WEO.

Were the 1980s a lost decade for Mexico? The answer can go both ways.

Yes, because Mexico suffered through years of structural change, as it was implemented in the midst of large net transfers abroad associated with debt repayment and a collapse in the terms-of-trade – GDP growth averaged only 0.2% over 1982-1988.

No, because the seven lean years witnessed radical trade liberalisation and the dismantling of the regulatory state, which led to a 4% average GDP growth in 1989-19946 (see Figure 11).7 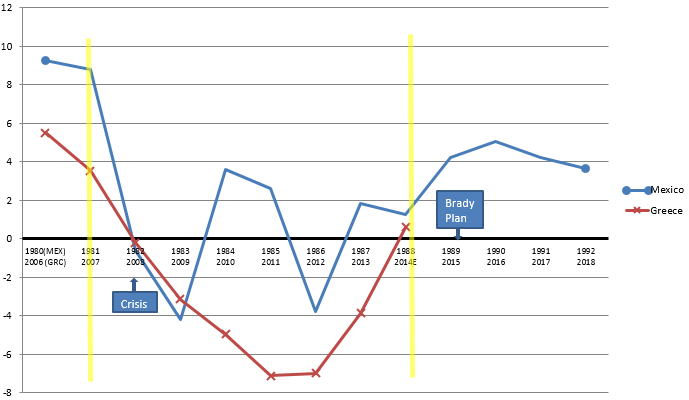 The Mexican Debt Crisis shows that leniency from international organisations towards has not helped Greece. Mexico received no bailout in the wake of the 1982 crisis. Moreover, a debt haircut occurred only after seven years of continuous debt repayment. This lack of leniency induced deep structural reforms, which led to the development of a competitive export sector and improved fiscal finances.

Image: A European Union (L) and Greek flag wave in front of the Parthenon temple in Athens.  REUTERS/John Kolesidis

Major European cities, like Paris and Brussels, have reduced their speed limits, in a continent-wide effort to reduce pedestrian deaths and emissions.

3 things to know about books and reading in Europe