What are the biggest risks facing Latin America?

This year, for the first time, the Global Risks report 2015 asked the World Economic Forum’s community of leaders from business, government, academia and non-governmental and international organisations to identify three global risks for which their region is the least prepared.

The global risks respondents from Latin America and the Caribbean (LAC) believe their region is not well enough equipped to cope with are presented in the table below. In LAC, risks related to society topped the survey with profound social instability as the first risk for which the region is the least prepared, cited by 33.3% of respondents.

At this year’s World Economic Forum on Latin America meets in Mexico, more than 700 leaders from all sectors had the opportunity to better understand the global risks faced by the region, to discuss potential implications and to take actions to address them and build reliance. 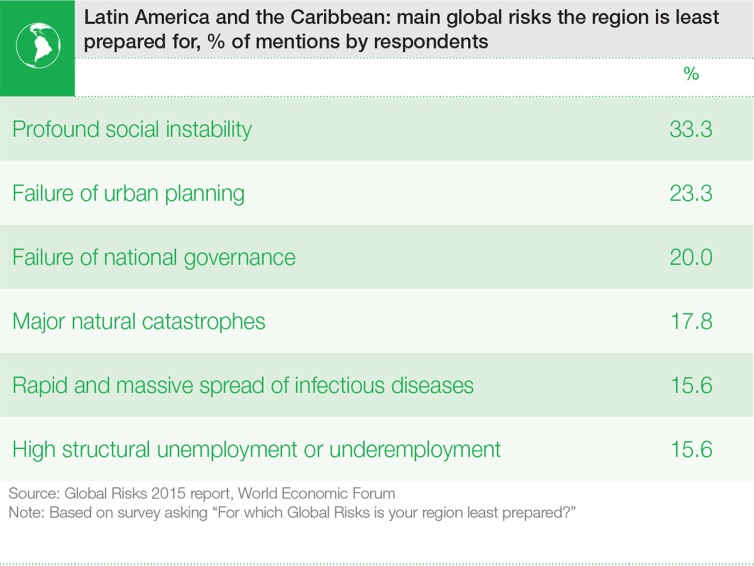 Profound social instability is cited as the main risk LAC is the least prepared for. In spite of progress in reducing income inequality, the region is still one of the most unequal in the world. As prosperity is not equally shared, tensions are emerging and fueling social instability.

LAC is experiencing a remarkable expansion of its middle class, which accounts today for a third of the population. However, inequality is still high and there is urgent need for structural reforms to advance shared prosperity.

In the past decade, millions have been lifted out of poverty but a significant part of the population is still extremely vulnerable to economic downturns. Widening of inequality is still a potential threat and low economic growth can put social progress at stake.

With 80% of its population living in cities, LAC is one of the most urbanized regions in the world. Although the future pace of urbanisation will not be as rapid as in other regions, the share of urban population is expected to increase to 86% by 2050.

While urbanisation can bring a number of important benefits and opportunities, rapid and unplanned expansion is a key driver of many risks. Failure of urban planning is the second risk for which the region is the least prepared.

Urbanisation puts pressure on existing infrastructure. Indeed, the availability and quality of many infrastructures such as public transport, sanitation, water supply or healthcare depend on the way urbanisation is taking place. Without careful planning, the benefits of urbanisation are threatened. Therefore, poor urban planning affects city’s infrastructure and negatively impacts living conditions, social inclusion and economic opportunities.

The rapidity, intensity and impact of global risks are exacerbated by higher population density, especially when cities are not carefully planned. For example, the human and economic losses are multiplied when natural catastrophes occur in a city and are even more substantial when informal settlements are affected. LAC is a region which is particularly vulnerable to natural disasters. A failure of urban planning makes its population, and more specifically the poorest part of it, extremely vulnerable.

Failure of national governance also features prominently and is ranked as the third global risks for which the region is least prepared. The well-functioning of institutions is critical to ensure inclusive and sustainable growth but corruption, political deadlock and impunity, among other failures of governance, prevent governments from putting in place policies to mitigate risks and build a resilient society.

It is important to understand the interconnected nature of global risks. The system is complex; global risks described above are not isolated issues and they are highly intertwined with each other, often sharing similar roots. For instance, failure of national governance impacts a broad spectrum of risks, from underinvestment in infrastructure and human capital to exacerbation of social fragility. Another example is the growth of middle class experienced in LAC. Such growth is associated with new social demands and high expectations. The way governments respond will determine social cohesion.

The future path of the region will be determined by how global risks are tackled. Many countries have already put in place important reforms, such as Mexico in the energy, telecommunications, and education sectors. One critical impediment to address is the relatively low level of productivity which compromises the region’s competitiveness and puts at stake recent positive developments. The World Economic Forum issued a set of recommendations to bridge the skills and innovation gap and boost productivity in Latin America. A focus on policies that establish the fundamentals of a well-functioning economy was at its core.

To successfully address these complex and interconnected global risks, multistakeholder cooperation is needed. Indeed, public-private collaboration is key to strengthen society’s preparedness and resilience to global risks. By bringing together leaders from all sectors, the World Economic Forum on Latin America will provide the opportunity to take actions to address and prevent global risks in the region.

Image: Laborers work on an unfinished infrastructure area outside of the Dunas arena soccer stadium in Natal, June 10, 2014. REUTERS/Carlos Barria

A Davos session brought together political leaders from Latin America, who shared the measures their countries are taking to foster a resilient economic recovery.

Latin America's leaders and the resilience of the region are being tested in the global context. This provides a new opportunity to renovate trust and promote greater regional integration.

Accelerating Digital Payments in Latin America and the Caribbean

Ukraine-Russia war: how will it affect Latin America and the Caribbean?

This restoration programme in Brazil aims to reforest 1.5m hectares of land