7 things to watch for if Greece leaves the euro

A last-minute deal on bailing out Greece might still be struck. But what if the talks fail, Greece defaults and we see the first departure from the euro? Conventional wisdom suggests it would be an economic disaster. But history says otherwise: economies are more likely to recover than falter.

According to Oxford Economics, there have been more than 70 such currency union break-ups since 1945. No two currency divorces are the same, but of these exits, three involved countries at a similar level of development to Greece: Ireland (when it stopped using sterling as the base of its monetary system in 1979), Slovakia (when it separated from the Czech Republic in 1993), and Argentina (when it stopped using the US dollar as its currency base in 2002.) 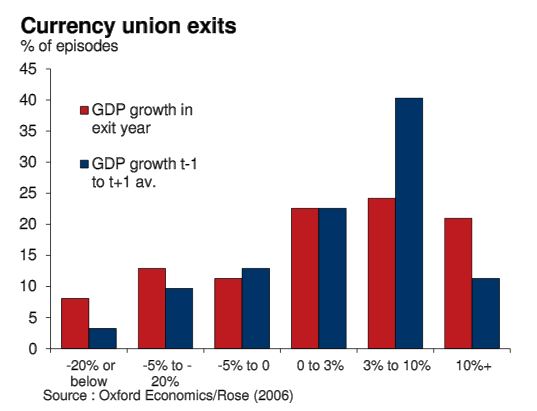 Based on past experience here are seven things to look for if there’s a ‘Grexit’ (Greek exit):

Argentina devalued by nearly 30% initially, Slovakia by 10%. Barclays has estimated the range for devaluations at 45-85% for countries in a similar predicament to Greece. The Bank of Greece would have to circulate a new currency overnight. It’s likely to struggle. Commercial banks are regarded as vulnerable, interest rates likely to climb and insolvencies rise.

The European Central Bank would no longer be required to support the Greek banks. The Bank of Greece would need to ward off a bank run. Ireland, Slovakia, and Argentina all used exchange and other capital controls to take the pressure off the banks and Greece would need to do the same to provide a breathing space. It would hope to avoid Argentina’s fate of having to freeze bank deposits.

Economic collapses are rare: Only 8% of currency exits since 1945 saw GDP fall by more than 20%. Some analysts see a parallel between Greek and German relations and the break-up of the monetary union between the Czech republic and Slovakia in 1993 due to diverging economies. Slovakia, the weaker partner in the union, saw GDP fall by just 4% before it later surged. Oxford Economics sees Greek GDP falling 10%.

Greece possibly best resembles Argentina in 2002 when Buenos Aires markets were already depressed after a prolonged period of financial stress. The Argentinian market sank a further 70% after its currency exit but it only took a couple of years for it to reach new highs. The Greek stock market is already a long way down on its pre-crisis peak and once the grexit shock is over there could be a strong rally.

Only €55bln of Greece’s €316bln total is held by the private sector with the balance in the hands of governments (mostly in the European Union) and supranational institutions like the IMF, all of whom are likely to see little of their money back.  But Greek officials will be keen to do what they can to keep commercial credit lines open. Like Russia after its default on official debt in 1998, Athens is likely to meet payments on commercial loans, possibly after renegotiation.

The Irish economy scarcely missed a beat as it made a well-telegraphed move from using sterling as a currency peg to the deutschmark. Slovakia and the Czech Republic took just five weeks to transition to separate currencies. But Argentina took more than a year to shift away from the dollar, during which time it defaulted, froze bank deposits and saw financial markets tumble — a combination that knocked GDP down 14.5%. The eurozone hasn’t had to handle an exit before and the more chaotic the changeover the deeper the GDP damage.

Oxford Economics calculates that two-thirds of countries saw their economies expand in their year of exit from a currency union — the median growth rate is 2.7% — and one of the key drivers is the boost to competitiveness from sharp devaluation. While the Greek economy is likely to shrink at first, a vigorous recovery is expected. Analysts at Munich thinktank IFO even believe the Greek textile industry could re-emerge.