What do the latest US jobs numbers tell us about interest rates?

The U.S. Federal Reserve should take a very close look at the latest jobs numbers as it contemplates when to begin raising interest rates. Job growth continued apace in May, but not swiftly enough to spur adequate wage growth. The U.S. economy added 280,000 jobs last month and the unemployment rate moved up slightly to 5.5 percent, according to data released this morning by the U.S. Bureau of Labor Statistics. Yet nominal wage growth (not accounting for inflation) for all private-sector workers has yet to accelerate, growing at a 2.3 percent rate over the past 12 months. The forecast for nominal wage growth doesn’t look any better either, unless job growth picks up significantly.

The overall unemployment rate slightly increased by a percentage point over the month due to increased labor force participation, but there are still many signs that slack in the labor market is diminishing only slowly. The share of workers who are marginally attached to the labor force or working part-time for economic reasons declined to 5.3 percent in May and has been on the decline for over three years. But the level is still above 3.8 percent, what is was right before the Great Recession in December 2007.

Another key measure of the labor market is the share of prime-age workers (those between the ages of 25 and 54) with a job. The prime-age employment ratio has been steadily increasing as the recovery from the Great Recession took hold, with job growth chipping away at those deep, recession-driven job losses. The ratio is currently 77.2 percent, significantly above its nadir of 74.8 percent in November 2010. But the ratio is below its pre-recession peak of 79.7 percent in December 2007 and its level before the previous recession in March 2001 of 81.3 percent.

A good indicator of a healthy labor market is strong and sustainable wage growth. Given that goal, what level of the prime-age employment rate would indicate a robust labor market? Assuming a 1.5 percent labor productivity growth rate and 2 percent annual inflation – the target inflation rate of the Federal Reserve—then adequate nominal wage growth is at least 3.5 percent. Wage growth for production and non-supervisory workers has only hit that target over the past 25 years when the prime-age employment ratio was at least 79 percent six months prior. (See Figure 1.) 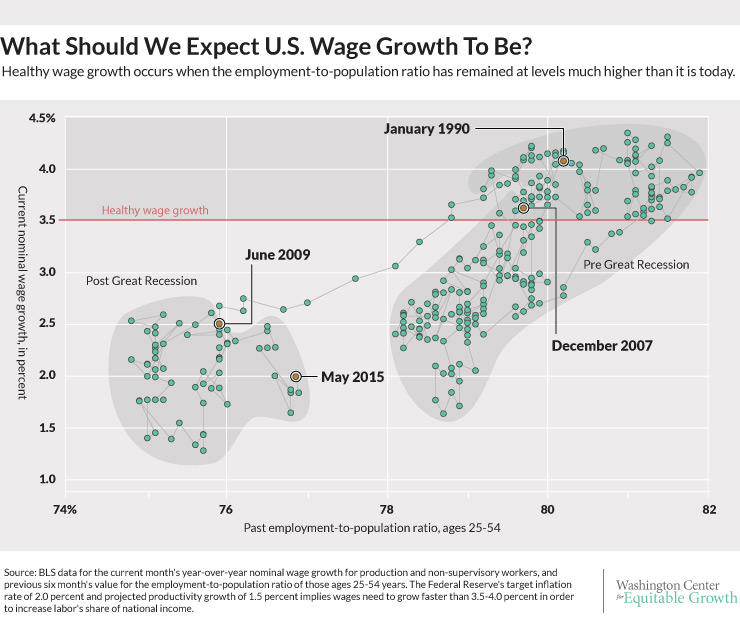 How long will it take to hit that 79 percent target? If we assume the employment ratio continues to grow at the rate it has been over the past year, then it will hit that target in 27 months, or around September 2017. And then six months later, in March 2018 we would expect to see healthy wage growth.

Economists and market analysts alike believe the slowdown in overall economic growth will cause the Fed to hold back on raising interest rates until later this year. But as this quick analysis shows, it may be years before the labor market is strong enough to produce adequate wage growth. Maybe those interest rate hikes can wait a bit longer.

This article is published in collaboration with The Washington Centre for Equitable Growth. Publication does not imply endorsement of views by the World Economic Forum.

How has COVID-19 affected business investments in digital technology?

Survey data from Germany shows that the pandemic has increased the diffusion of digital technologies, especially in combination with working from home.

What are different countries across the world feeling the most worried about?

Climate change was not the biggest worry in any of the countries surveyed, despite being one of the world's most pressing challenges.

How can Canada encourage more female workers to join the construction trade?

Overcoming stigma: 3 strategies toward better mental health in the workplace

The secret of productivity growth is not technology

The ‘meaning quotient' and what it has to do with work