Which jobs can’t be done by robots?

Robots are coming for our jobs. But it will be ages before they take jobs you think can be done only by humans, right? After all, humans possess unique advantages such as “interpersonal skills.”

Well, it’s not that simple. The robots might be coming for your job, even if you think it seems safe.

At last year’s Jackson Hole conference of economists and central bankers, David Autor, an MIT economics professor and expert on technology’s effects on the labor market, made the argument that several jobs were probably not going to be capable of automation over the next few decades — namely, jobs in which “routine tasks are too intertwined with those requiring interpersonal and other human skills to be easily replaced.”

This is consistent with the seminal recent paper on automation and the future of the labor force by Carl Frey and Michael Osborne, 2013’s “The Future of Employment.” Frey and Osborne used data from the Bureau of Labor Statistics’ O*NET database, which includes a huge array of characteristics of various occupations. They identified jobs that they deemed to be unlikely to be automated, based on how much those jobs involve difficult to automate characteristics like perception, fine motor skills, creativity, and social aptitude.

On a broad scale, they found that several management, STEM, education, and medical jobs were safe from the robots, while many service, sales, and administrative jobs are at risk: 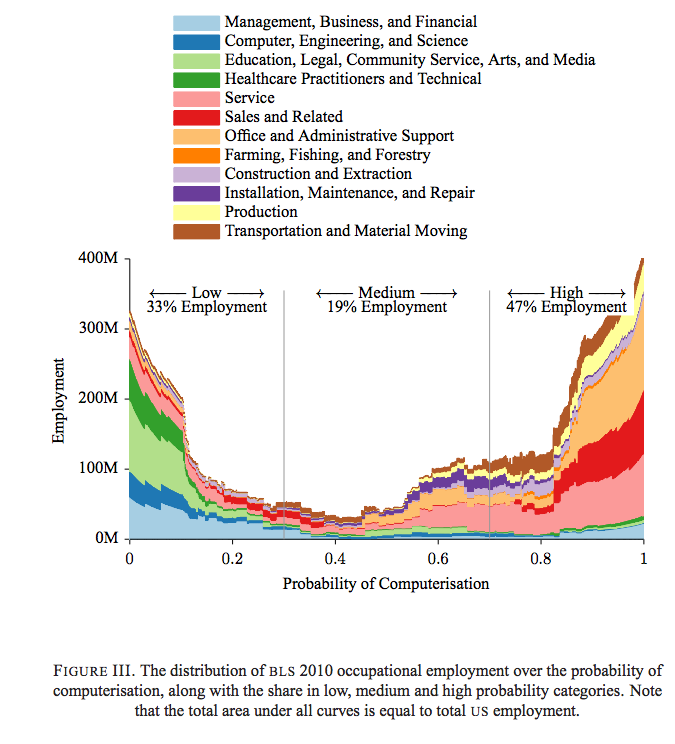 On a finer level, among the least likely jobs to be automated are those that do in fact involve a fair amount of cognitive skill along with human interaction: Occupational therapists, surgeons, choreographers, pre-school teachers, and clergy are among the professions for which Frey and Osborne found a less than 1% chance of automation.

It may be a mistake for the kinds of workers mentioned above to get too complacent.

On Friday, Ritholtz Wealth Management CEO Josh Brown tweeted out this observation: “To replace a human worker, a robot doesn’t have to be perfect — it just has to make fewer mistakes than people do, a very low hurdle.”

Most of us have called a computerized customer-service line and been frustrated at the machine’s inability to understand what we were saying. Despite that imperfection, automated phone help lines are still very common.

This gets even worse when we consider the interpersonal skills that are assumed to be the great bulwark against automation. An April New York Fed survey found that 51% of manufacturing employers and 38% of business leaders had difficulty finding workers with these skills. The survey also showed that 57% of manufacturers and 34% of business leaders had difficulty in finding punctual and reliable workers:

While the robots of the near future might not be as good at combining cognitive and interpersonal skills as most humans, they might still be good enough for employers, and they will definitely be at work on time.

Rather than replacing human roles, robots and AI will be increasingly working alongside people in the jobs of the future, helping to deliver medicine and restoring coral reefs.