Can we stave off catastrophic climate change while building the energy systems needed to power growth, create jobs and lift millions of people out of poverty? That’s a crucial question for Africa. No region has done less to contribute to the  climate crisis, but no region will pay a higher price for failure to tackle it. Meanwhile, over half of Africa’s population lacks access to modern energy.

Africa’s leaders have no choice but to bridge the energy gap, urgently. They do have a choice, though, about how to bridge the gap. Africa can leapfrog over the damaging energy practices that have brought the world to the brink of catastrophe – and show the world the way to a low-carbon future.

To achieve that vision, however, national and global financing arrangements must be reformed and boosted. The Third International Conference on Financing for Development in Addis Ababa offered a rare opportunity for global leaders to join forces and commit to the necessary changes. The new Addis Ababa Action Agenda, the comprehensive agreement reached at the end of the Conference, now provides a foundation for innovative, scaled up financing of the global sustainable development agenda, including the energy sector.

Africa stands to gain from developing low-carbon energy, and the world stands to gain from Africa avoiding the high-carbon pathway followed by today’s rich world and emerging markets. Unlocking this “win-win” will not be easy. It will require decisive action on the part of Africa’s leaders. Tackling Africa’s interlocking climate and energy problems also requires strengthened international cooperation.

Africa’s energy challenges are immense. Power shortages diminish the region’s growth by 2-4 per cent a year, holding back efforts to create jobs and reduce poverty. Despite a decade of growth, the power generation gap between Africa and other regions is widening.

Energy-sector investment in Sub-Saharan Africa is inadequate, at only US$8 billion a year or 0.4 per cent of gross domestic product. A ten-fold increase in power generation is needed to achieve the United Nations sustainable development goal of universal access to energy by 2030; if current trends continue, the goal won’t be reached until 2080.

Africa’s energy financing gap – the extra investment it needs to bring modern energy to all – stands at $55 billion per year until 2030. That sounds like a large sum, but it would deliver high social and economic returns.

One of the greatest barriers to the transformation of the power sector is the low level of tax collection and the failure of some African governments to build credible tax systems. Almost half of the gap could be covered by increasing Sub-Saharan Africa’s tax-to GDP ratio by 1 per cent of GDP.

African governments need to phase out the US$21 billion in energy subsidies geared towards the rich. Subsidizing connections for the poor is more efficient and equitable than subsidizing energy consumption by the rich and subsidizing kerosene is of limited value as a tool for achieving universal access.

Long-term national interest must override short term political gain. Energy-sector governance and financial transparency will help bring light in the darkness. Energy entrepreneurs can join the reformed utilities in investing revenues and energy funds in sustainable power. Sustained regulatory reform is critical for investment. Unbundling power generation, transmission and distribution is one step towards creating more efficient and stable energy markets. Independent regulation is another. But private investors require an energy buyer such as a utility or dedicated power-purchasing agency and it is hard to build a convincing business case when the main buyer is a highly-indebted, corrupt and inefficient utility.

Governments should strengthen the market for low-carbon energy through predictable off-take arrangements, utility purchase arrangements, feed-in tariffs and auctions. Recognizing that the initial capital costs of renewable energy investment can be prohibitive, governments and regulators should seek to reduce risks and support the development of the market through appropriately subsidized loans.

Aid can play a supportive, catalytic role. Aid donors should commit to the longstanding target of devoting 0.7 per cent of gross national income (GNI) to aid. African governments should mobilize around US$10 billion to expand on-grid and off-grid energy access. The international community should match this effort through US$10 billion in aid and concessional finance aimed at supporting investments that deliver energy access to populations that are being left behind. President Barack Obama’s Power Africa initiative, which promises US$7 billion over five years, has acted as a focal point for a range of US agencies and the private sector. Energy cooperation between the European Union and Africa is deepening. The game-changer, though, is the emergence of China as a source of integrated project finance for large-scale energy projects.

Governments in the major emitting countries should place a stringent price on emissions of greenhouse gases by taxing them, instead of continuing effectively to subsidize them, for example by spending billions on subsidies for fossil-fuel exploration. The three 2015 summits should aim at a comprehensive phase-out of all fossil fuel subsidies by 2025, with appropriate support for low-income countries. Eliminating subsidies for fossil-fuel exploration and production – especially coal – should be a priority.

In 2012, Africa lost US$69 billion from illicit financial flows. G8 and G20 countries must act on past commitments to strengthen tax-disclosure requirements, prevent the creation of shell companies and counteract money laundering. Implementation of the G20/OECD’s planned actions on base erosion and profit shifting should be accelerated; and the international community should support African efforts to strengthen tax and customs administration and reduce illicit financial outflows, especially via trade misinvoicing. Other priority actions to mitigate illicit financial flows include public registries of beneficial ownership of companies and, with the assistance of the IMF, agreeing on how to define, measure and track such flows. A more efficient and equitable global tax system would decrease multinational companies’ ability to dodge their tax obligations. 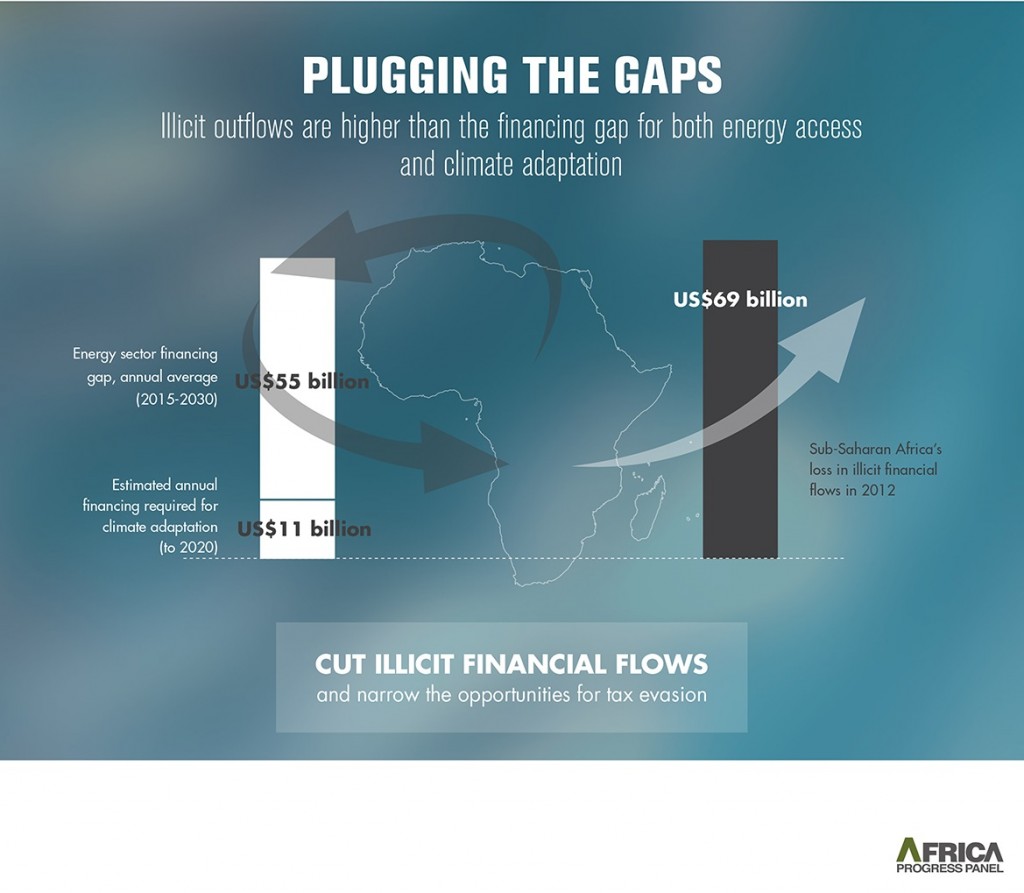 Climate finance has failed Africa. Detailed analysis of financial transfers points to two structural weaknesses in the climate-finance architecture: chronic under-financing and fragmentation. The separate multilateral agencies offering facilities to support adaptation should be merged into a single facility, perhaps under the auspices of the Green Climate Fund. Rich countries should set a clear timetable for delivering by 2020 the outstanding US$70 billion per annum in climate finance, which they committed to in Copenhagen, with greater transparency on financial commitments, the identification of new sources of finance and delivery mechanisms.

Once strong global development goals are in place, backed by smart financing and a fair climate deal, African countries will be in a better position to rethink their energy policies and transform their economies.

If financed correctly, Africa can both grow and show the way, by embracing a dynamic energy mix in which renewable sources will gradually replace fossil fuels. And the continent’s energy potential will transform lives.

Despite hosting 60% of the world's arable land, Africa is a major food importer. As the war in Ukraine rages, the continent faces another food crisis.

Malaria and agriculture are linked. Here's the evidence from 16 African countries